UN envoy arrives in Syria amid violent clashes in the north 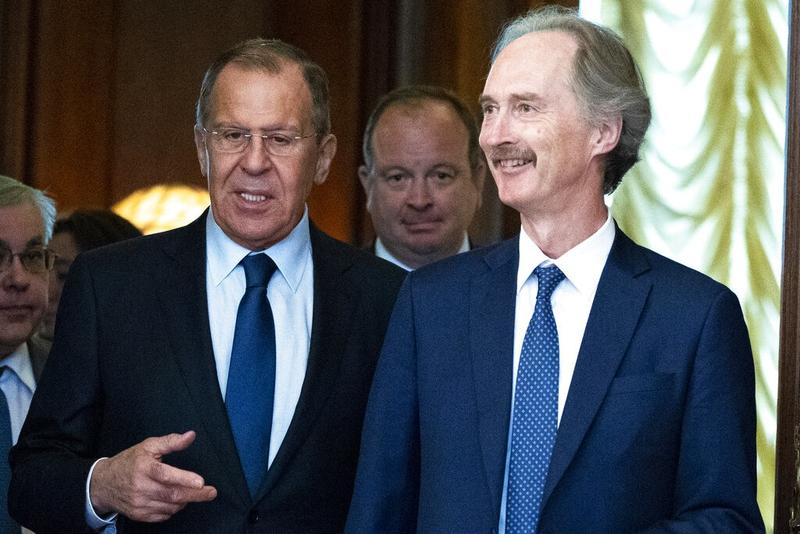 DAMASCUS, Syria — The UN's special envoy for Syria said Tuesday he is looking forward to constructive discussions with Syrian officials on the formation of a constitutional committee as a "door opener for the broader political process."

Geir Pedersen spoke with reporters in the Syrian capital Damascus shortly after arriving from neighboring Beirut. He is scheduled to hold meetings with Syrian government officials on Wednesday.

Pedersen's arrival also coincided with a new rebel offensive in the mountains of the coastal Latakia province, with opposition activists saying rebels overran a series of Syrian army positions

"I'm looking forward to have what I believe are constructive discussions on how to move the political process forward," Pedersen said, adding he would also discuss ways to end the fighting in northwestern Idlib province.

Syria is locked in a devastating civil war pitting President Bashar Assad's forces against rebels seeking to topple him. Fighting has raged in and around Idlib as government troops backed by Russia seek to make advances on the ground against insurgents who control the province.

Pedersen's arrival also coincided with a new rebel offensive in the mountains of the coastal Latakia province, with opposition activists saying rebels overran a series of Syrian army positions.

The Syrian Observatory for Human Rights said clashes are underway in several locations in the Turkman Mountains. It said the fighting killed 35 people on both sides in the opening hours. There was no immediate confirmation or government comment.

Pedersen's visit to Syria follows meetings he held with Russian officials in Moscow on Friday, where he urged Russia to help stabilize the violence in Idlib and support drafting the country's new constitution. Following his meetings there, he said "we now seem to be closer to establishing a constitutional committee."

The UN hopes that convening the constitutional committee would be the first step toward a new constitution and new elections.

However, Syrian officials have said they will not accept outside dictates when it comes to Syria's constitution and have suggested Assad might even run for re-election.

The more than yearlong effort to form a 150-member constitutional committee has been dogged by objections from Syria's government over the 50-member list representing experts, independents, tribal leaders and women. There is already agreement on 50-member lists from the government and the opposition.

Pedersen has also been calling for confidence-building measures between the government and the opposition such as prisoner releases.