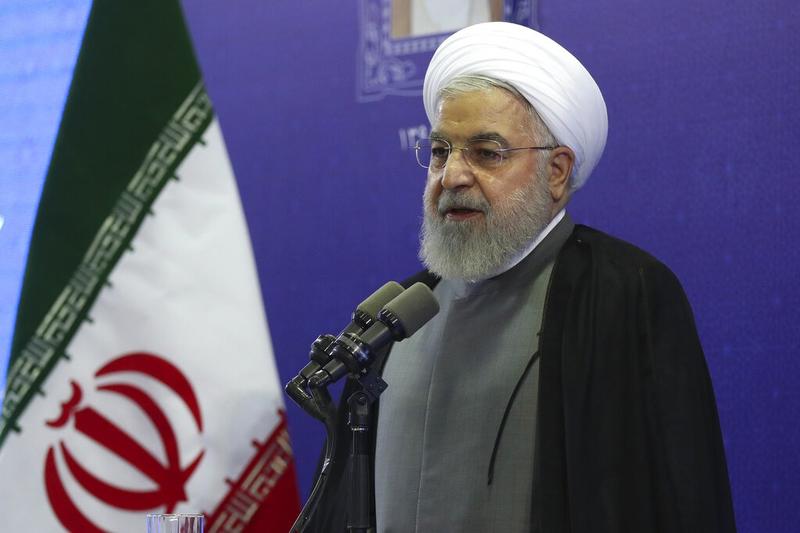 In this photo released by the official website of the office of the Iranian Presidency, President Hassan Rouhani speaks in the inauguration ceremony of a power plant in northwestern Iran, Aug 1, 2019. (IRANIAN PRESIDENCY OFFICE VIA AP)

TEHRAN, Iran — Iran's Revolutionary Guard has seized a ship in the Persian Gulf suspected of carrying smuggled fuel, state media reported Sunday, marking Iran's third seizure of a commercial vessel in recent weeks and the latest show of strength by the paramilitary force amid a spike in regional tensions.

State TV and the semi-official Fars news agency reported that seven crew members were detained when the ship was seized late Wednesday carrying 700,000 liters of "smuggled fuel" from Iran. The local reports did not provide further details on the vessel or the nationality of the crew.

This foreign vessel had received the fuel from other ships and was transferring it to Persian Gulf Arab states.

The news agency reported that the ship was seized near Farsi Island, where an Iranian Guard Navy base is located. The island sits in the Persian Gulf between Saudi Arabia and Iran, north of the Strait of Hormuz.

"This foreign vessel had received the fuel from other ships and was transferring it to Persian Gulf Arab states," Fars quoted Gen Ramazan Zirahi, a Guard commander, as saying.

This would mark the third commercial vessel seized by Iranian forces in recent weeks and the second accused of smuggling fuel.

Illegal fuel smuggling out of Iran is a concern of authorities there. Iranian media reported last month that some 8 million liters of government-subsidized Iranian fuel are smuggled daily through Iran's borders to other countries where prices are much higher.

Tensions have soared around the Strait of Hormuz, a critical oil shipping waterway that lies between Iran and Oman. The US has boosted its military presence in the region and six oil tankers have been targeted in the Gulf of Oman in unclaimed acts of sabotage that the US blames on Iran. Iran has denied any involvement in those attacks.

The following week, the Guard's naval forces seized a British-flagged vessel in the Gulf in what some Iranian officials suggested was retaliation for the seizure of an Iranian oil tanker in a British Royal Navy operation off Gibraltar. The UK says the Iranian oil tanker was suspected of violating European Union sanctions on oil shipments to Syria. Iran denies the ship was bound for Syria but has not disclosed its destination.

The tensions are rooted in President Donald Trump's decision last year to withdraw the US from Iran's 2015 nuclear accord with world powers and impose sweeping sanctions on the country. Iran recently began openly breaching limits set by the nuclear agreement, saying it cannot abide by the deal unless European signatories provide some kind of economic relief.