US piles up pressure on Turkey over offensive in Syria 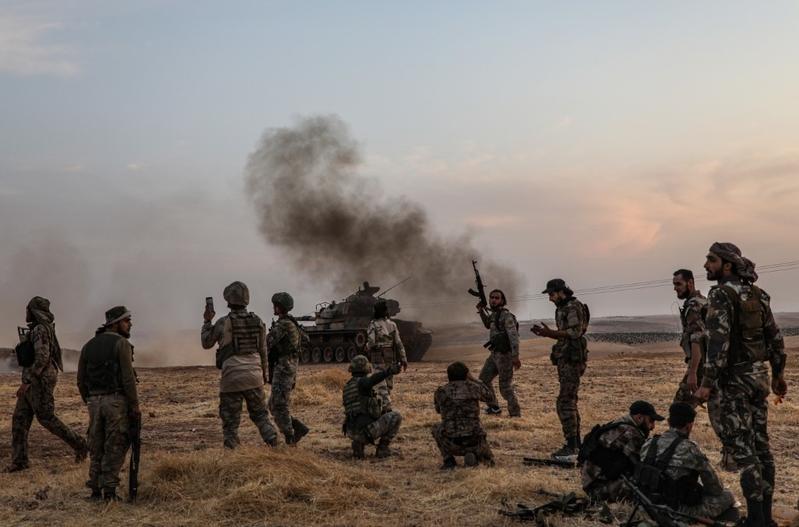 In this file photo taken on Oct 14, 2019 Turkish soldiers and Turkey-backed Syrian fighters gather on the northern outskirts of the Syrian city of Manbij near the Turkish border as Turkey and its allies continue their assault on Kurdish-held border towns in northeastern Syria. (ZEIN Al RIFAI / AFP)

WASHINGTON — The United States on Monday rolled out a package of punishment on Turkey over its ongoing military operations in Syria, as some US lawmakers questioned the measures' effectiveness.

US President Donald Trump on Monday signed an order authorizing sanctions against Turkey and raised tariffs on steel imports from the country in response to its military operations in Syria.

The Trump administration's new move came days after Turkey launched military operations targeting the Kurdish forces in several parts of northeast Syria and also followed Trump's order over the weekend to withdraw around 1,000 US troops from northern Syria

Following the authorization, the US Treasury announced later in the day that it has designated Turkey's Ministry of National Defense and the Ministry of Energy and Natural Resources, as well as the heads of the two ministries and Turkish interior minister, for their involvement in Turkey's actions "that further deteriorate peace, security, and stability of the region," saying it is prepared to impose additional sanctions on Turkish officials and entities "as necessary."

Trump said in a statement released on Monday afternoon that the United States will immediately stop negotiations for a 100-billion-US dollar trade deal with Turkey and raise tariffs on steel imports from Turkey back up to 50 percent.

The United States in May cut its tariffs on imports of Turkish steel from 50 percent to 25 percent, while terminating the preferential trade treatment for Turkey.

The Trump administration's new move came days after Turkey launched military operations targeting the Kurdish forces in several parts of northeast Syria and also followed Trump's order over the weekend to withdraw around 1,000 US troops from northern Syria.

US Vice President Mike Pence told reporters on Monday evening that Trump spoke with his Turkish counterpart Recep Tayyip Erdogan earlier in the day and called for an immediate end to Turkey's moves against the Kurdish forces in Syria.

Pence also said that he will soon visit the Middle East to meditate the crisis.

US Defense Secretary Mark Esper said in a statement on Monday that Ankara's offensive has undermined the mission of defeating the Islamic State (IS) in Syria and resulted in the release of many IS detainees.

Esper added that he is planning to press other NATO allies to take "diplomatic and economic measures" in response to the Turkish actions during his upcoming visit to Brussels next week.

Trump previewed the executive order he was to sign in a statement first posted in his Monday afternoon tweet, saying that the order will also enable Washington to impose "powerful additional sanctions" against those involved in "serious human rights abuses, obstructing a ceasefire, preventing displaced persons from returning home" among other issues regarding Turkey's action in Syria.

The blacklisted persons will face a broad range of consequences, "including financial sanctions, the blocking of property, and barring entry into the United States," the statement added.

Trump also noted that the US troops leaving Syria will remain in the Middle East region to "monitor the situation," while a small number of US forces will remain at At Tanf Garrison in southern Syria to counter the remnants of the IS.

The Trump administration's latest actions have raised some questions from the US Congress members, who said that it is not enough to halt Turkey from advancing its military actions.

"President Trump has unleashed an escalation of chaos and insecurity in Syria. His announcement of a package of sanctions against Turkey falls very short of reversing that humanitarian disaster," said US House Speaker Nancy Pelosi in a statement.

"I am gravely concerned by recent events in Syria and by our nation's apparent response thus far," said Senate Majority Leader Mitch McConnell in a statement.

Abandoning the fight against the IS now and withdrawing US forces from Syria would "re-create the very conditions that we have worked hard to destroy and invite the resurgence of ISIS," he added.

It has been reported that the two chambers are readying bills to sanction and potentially ban US arms exports to Turkey, a NATO ally, to punish it over military operations in northern Syria.