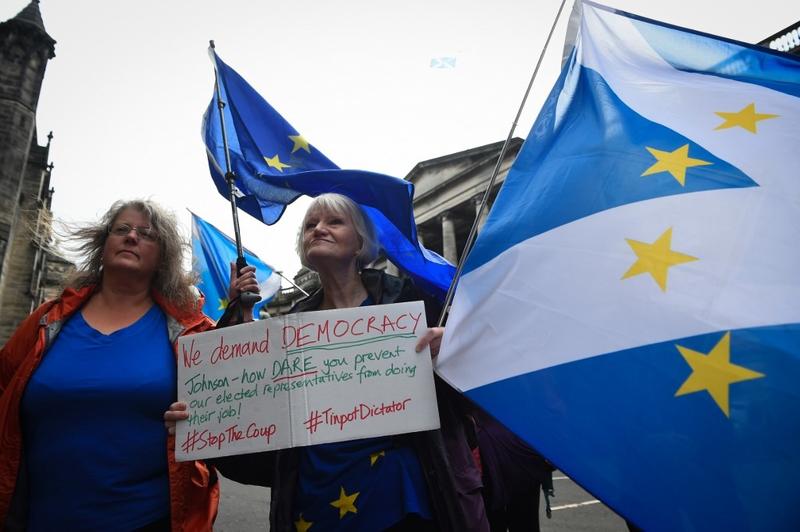 A protester demonstrates against Conservative Prime Minister Boris Johnson's decision to suspend parliament outside the Court Of Session in Edinburgh, Scotland on Aug 30, 2019. (ANDY BUCHANAN / AFP)

HELSINKI — The first legal challenge to prevent British Prime Minister Boris Johnson from suspending Parliament has been delayed in a Scottish court.

Judge Raymond Doherty, however, said a full hearing on the case will be heard on Sept 6, raising the prospect that the government's move could still be blocked

The Court of Session in Edinburgh refused Friday to take immediate legal action to prevent Johnson from suspending Parliament for several weeks during part of the period ahead of the Brexit deadline on Oct 31.

The decision in Scotland's highest civil court is a setback for a cross-party group of legislators seeking to broaden the period for parliamentary debate in a bid to prevent a disorderly departure by Britain from the European Union.

Two other legal cases are still in progress. One is in Northern Ireland and the other is in London. Former prime minister John Major is seeking to join the case in London already brought by activist Gina Miller.

"If granted permission to intervene, I intend to seek to assist the court from the perspective of having served in Government as a minister and prime minister, and also in Parliament for many years as a Member of the House of Commons," he said.

Major is an outspoken critic of Brexit who had vowed to intervene legally if Johnson sought to prevent parliamentary debate on the issue.

The legal skirmishes are designed to prevent Johnson from substantially shortening the amount of time Parliament will be given to enact legislation that might prevent a "no deal" Brexit, that many economists believe would damage Britain's economy.

Johnson has repeatedly vowed to take Britain out of the EU bloc on Oct 31 even if no arrangement has been reached. His predecessor, Theresa May, reached an agreement with EU leaders but Britain's Parliament repeatedly rejected the terms.

In Helsinki, British Foreign Secretary Dominic Raab defended his government's decision to suspend parliament and rejected suggestions that the move will prevent lawmakers from debating the country's departure from the European Union as concern mounts that a costly and damaging Brexit without any agreement is now more likely.

On Wednesday, Johnson got Queen Elizabeth II's approval to suspend parliament, a move widely criticized by his political opponents who see it as a maneuver to give them even less time to block a chaotic no-deal Brexit.