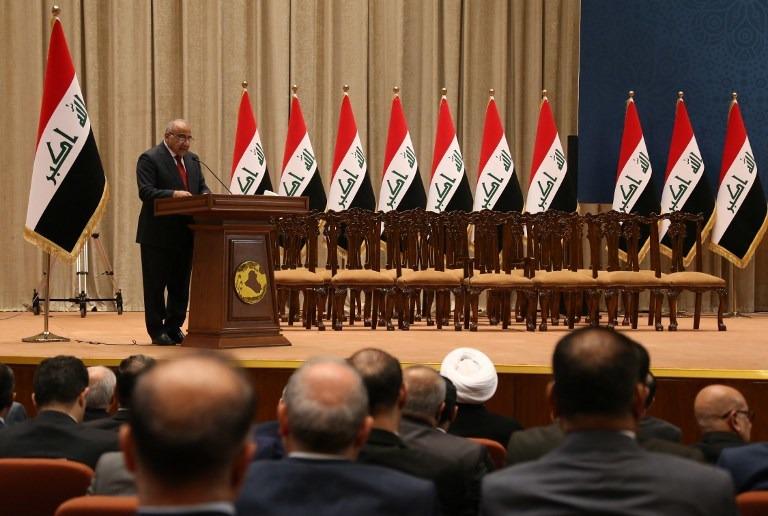 In this Oct 24, 2018 photo, Adel Abdul Mahdi, the new prime minister, addresses the Iraqi parliament during the vote on the new government in Baghdad. (PHOTO / STR / AFP)

BAGHDAD — A vote in Iraq's parliament on the remaining candidates for Cabinet seats was postponed again Tuesday amid deep divisions over the key defense and interior portfolios.

Deputy Speaker Hassan al-Kaabi said Prime Minister Adel Abdul-Mahdi submitted the names of eight candidates who were already rejected in an October session when parliament approved other Cabinet members. The vote was disrupted after a chaotic session and postponed until next week.

Iraq held national elections in May, and in October, parliament voted and approved 14 out of 22 cabinet ministers. A growing rivalry between Iraq's two most powerful Shiite factions is believed to be behind the repeated delays to fill the vacant ministries.

Al-Kaabi warned that further delays could have a negative impact on the security situation in Iraq. The new government faces the twin tasks of rebuilding the north of the country following the war against the Islamic State group and rehabilitating services in the south, where severe water and electricity shortages have fueled protests.

Protests in the southern city of Basra resumed Tuesday, with hundreds of people demonstrating for improved services.

In a letter to lawmakers, Abdul-Mahdi said he can submit other names within two days in case his proposals are rejected.