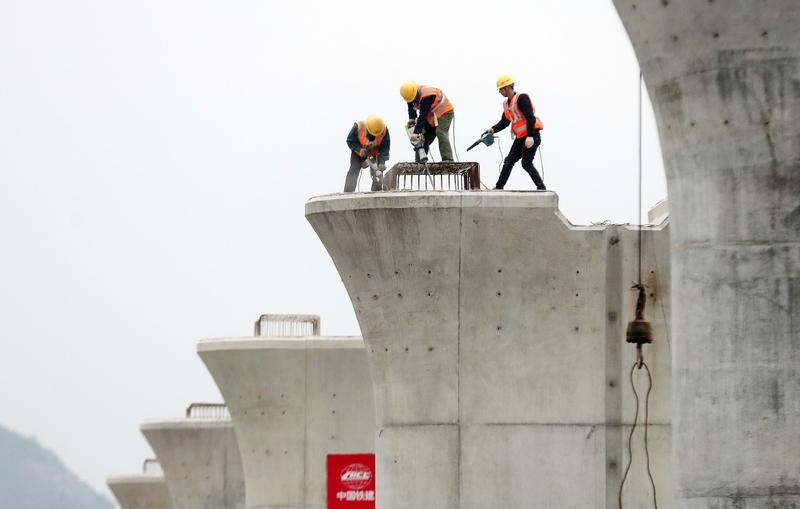 In this undated photo, workers at a bridge construction site of the Hangzhou-Shaoxing-Taizhou Railway in Linhai, Zhejiang province. (LIN YUNLONG / FOR CHINA DAILY)

The Hangzhou-Shaoxing-Taizhou line in East China's Zhejiang province, which is the first privately controlled high-speed railway line in China, is expected to become the country's first railroad line managed by artificial intelligence, according to the companies responsible for the railway's construction.

HSTR, the company in charge of construction and management of the railway line, signed an agreement with China Railway Gecent Technology Co Ltd on Wednesday in Shanghai to apply the latest technology innovation in the Hangzhou-Shaoxing-Taizhou line to make it the first smart railway line in the country.

Wu Peirong, general manager of HSTR, said that the newly announced cooperation with CRGT will introduce technologies such as the internet of things and artificial intelligence while building the railway line.

The Hangzhou-Shaoxing-Taizhou railway line is completely new, including the stations. In this sense, it is unnecessary to resort to the older technologies when building the line. A new technology system can be developed here

The primary operation of CRGT is to build and manage Wi-Fi services on high-speed trains in China. The company released a smartphone application in September last year with which passengers can connect to the on-board Wi-Fi, look for online entertainment and even make food delivery orders. Up till now, CRGT has gained more than 10 million users in China.

Pan Yunbin, chief executive officer of CRGT, explained that artificial intelligence can be introduced for the construction of the Hangzhou-Shaoxing-Taizhou line to manage equipment, the flow of passengers, parking lots, businesses and even billboards to make the line run more efficiently.

The application of artificial intelligence can also help to cut the operating costs of the railway line, said Pan. Its electricity costs, for example, can be cut by at least 30 percent if the power supply is managed by intelligent machines.

"The Hangzhou-Shaoxing-Taizhou railway line is completely new, including the stations. In this sense, it is unnecessary to resort to the older technologies when building the line. A new technology system can be developed here," said Pan.

The investment agreement for the Hangzhou-Shaoxing-Taizhou line was signed in September 2017, with a total investment of 44.89 billion yuan (US$6.53 billion). A consortium of eight privately owned enterprises led by Shanghai-based conglomerate Fosun International will take a controlling 51 percent stake in the railway project's registered capital of 12.36 billion yuan. It is one of the eight railway projects involving private investment approved by the National Development and Reform Commission, China's top economic regulator.

Construction of the public-private partnership railway project started at the end of 2017. So far, 35 percent of the project has been completed, according to information provided at the signing ceremony on Wednesday. Work on the Taizhou station, which is the largest project in this 269-kilometer line, started on June 27. The entire project is scheduled to wrap up and officially start running in 2021.