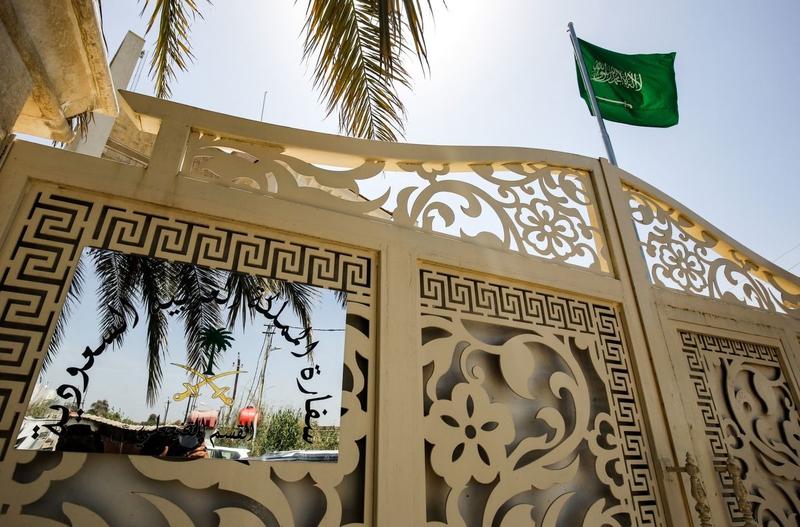 A Saudi flag flies at the gate of the new Saudi consulate in Baghdad. (AHMAD AL-RUBAYE / AFP / GETTY IMAGES)

The border between Saudi Arabia and Iraq is a line in the sand that says much about the Middle East’s instability over the past three decades.

As the US pushes Iraq to stop buying natural gas and electricity from Iran, President Hassan Rouhani wants it to purchase more to help mitigate American sanctions

It was shut in 1990 after Saddam Hussein’s invasion of Kuwait triggered the Gulf War. The Saudis proposed building a US$7 billion barrier to seal it in 2006 as sectarian violence escalated. Then the rise of Islamic State prompted the kingdom to strengthen the 900-kilometer (560-mile) frontier.

With the extremist militants driven out of Iraq, Saudi Arabia is preparing to reopen the land crossing to trade this year because of the latest conflict that’s dominating the region: its proxy war with Iran. In a stark reversal of policy, the kingdom has identified Iraq as a timely ally in curbing the influence of its Shi'ite enemy, which on Wednesday threatened to abandon commitments made in its 2015 nuclear deal in response to American sanctions.

The Saudis have been flexing their diplomatic and financial muscle. A ministerial and business delegation visited Iraq last month and came away with a pledge to invest US$1 billion in development projects and open a consulate in Baghdad. Saudi Arabia has also employed other soft power tactics such as offering to build a sports stadium and government-backed broadcaster MBC recently announced a dedicated channel for Iraq. Clerics in the kingdom have been toning down their anti-Shi'ite rhetoric.

Saudi Arabia’s aim is to prop up a government in Baghdad whose authority has been challenged by Iran-sponsored militias and bring the nation back firmly into the Arab fold, according to Ibrahim al-Nahas, a member of the Saudi Shura Council’s Foreign Affairs Committee.

“We want to help Iraq be a strong country” Al-Nahas said in an interview in Riyadh last week. A Saudi rapprochement with Iraq “will decrease the influence of Iran inside Iraq” and the whole region, he said.

Iraq has been dominated by non-Arab Iran after the majority Shi'ites took over power following the 2003 US-led invasion. Saudi Arabia now considers Iraq as a potential bulwark against Iran rather than a puppet state controlled by Tehran. It wants to show the problem is not with Shi'ites, but with Iran, which the kingdom believes has been meddling in Arab affairs.

To the south, Saudi Crown Prince Mohammed bin Salman has led a disastrous military campaign against Iranian-backed rebels in Yemen. It’s drawn condemnation from western allies just as they distance themselves from Saudi Arabia over the murder of columnist Jamal Khashoggi.

On the western front across the Red Sea, the Saudis have been co-opting the Iran-allied regime in Sudan. The kingdom and the United Arab Emirates, its closest ally, pledged a US$3 billion economic support package for the African country after longtime dictator Omar al-Bashir was toppled last month. 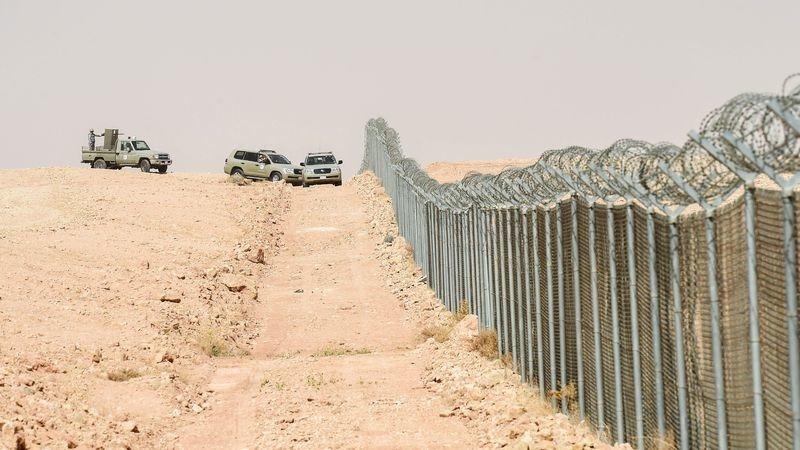 Iraq, the largest Shi'ite population in the predominantly Sunni Arab world, has been receptive to Saudi Arabia as the leadership in Baghdad seeks to benefit from both powers.

On a state visit to Riyadh last month, Iraqi Prime Minister Adel Abdul Mahdi oversaw the signing of 13 agreements whereby Saudi Arabia pledged to pump a billion dollars into its neighbor’s economy. It was the culmination of diplomacy that started in October 2017 when the two countries set up a coordination council and declared their intention to reopen the border at the Arar crossing, which is scheduled for October this year.

“We are witnessing a major transformation in relations with the kingdom,” Abdul Mahdi said before his visit. Saudi capital can be used to help rebuild the country after the defeat of Islamic State and its energy and agricultural expertise can help develop Iraq’s own industries, said Mohammed Hanoon, the Iraqi trade ministry spokesman. “The door is wide open,” he said.

Making a dent in Iran’s presence will prove difficult, though the Saudis have the money. There’s also support from the US, which still has personnel stationed in Iraq.

Secretary of State Mike Pompeo made an unannounced trip to Baghdad on Tuesday to urge Iraqi leaders to beware of Iranian forces and allies. Washington has increased sanctions on Iran after withdrawing from the agreement on developing its nuclear capabilities. The government in Tehran said it would resume uranium enrichment beyond agreed limits in 60 days if Europe can’t find a way to ensure it can sell oil and trade with the world. 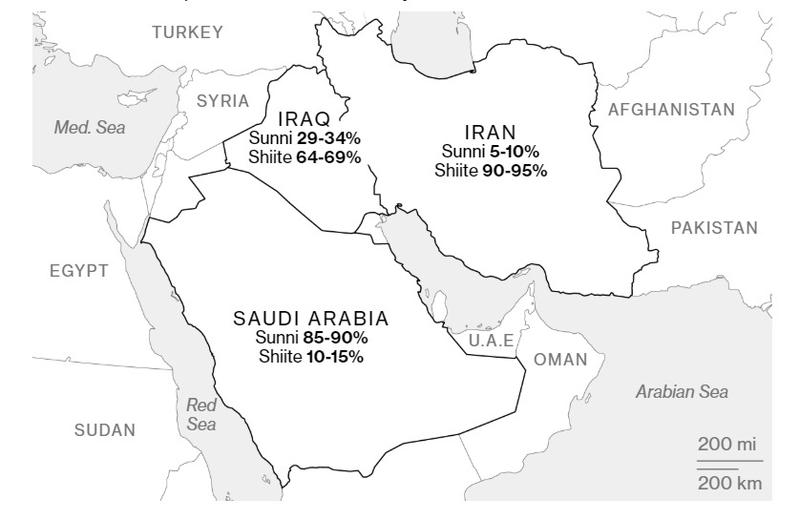 One-third of Iraqis are Sunni in a country sandwiched between rivals. (GRAPHIC / BLOOMBERG)

The Saudis “have been relatively successful” in Iraq, said James M Dorsey, senior fellow at Singapore’s S Rajaratnam School of International Studies and its Middle East Institute. “They need, however, to follow up on promises and capitalize on the fact that, unlike the Iranians, they have the cash to do so.”

Indeed, Iraq is saturated with Iranian influence, from its economy to politics and the powerful Shi'ite militias.

The Islamic Republic exported more than US$1.66 billion worth of tomatoes alone to Iraq in 2017 and is the country’s top source of everything from pig lard to human hair. Iran jumped from the Arab nation’s fifth biggest non-oil exporter in 2016 to its biggest in 2017, bypassing China. Iraqi supermarket shelves are often stocked with cheap Turkish and Iranian products.

Al-Nahas said the kingdom tried to make inroads with former Iraqi Prime Minister Nouri al-Maliki, who was in power between 2006 and 2014, but to no avail. “He was working for Iraq to be part of Iran,” he said.

As the US pushes Iraq to stop buying natural gas and electricity from Iran, President Hassan Rouhani wants it to purchase more to help mitigate American sanctions. “Being in Iraq feels like being in our own country,” Rouhani said during a three-day state visit to Baghdad in March. “It’s not a link that can be weakened and we are always keen to make it stronger.”

The two countries signed transportation and trade agreements and announced an end to visa charges for each other’s citizens. Rouhani said officials planned to boost bilateral trade to US$20 billion from the current US$12 billion. 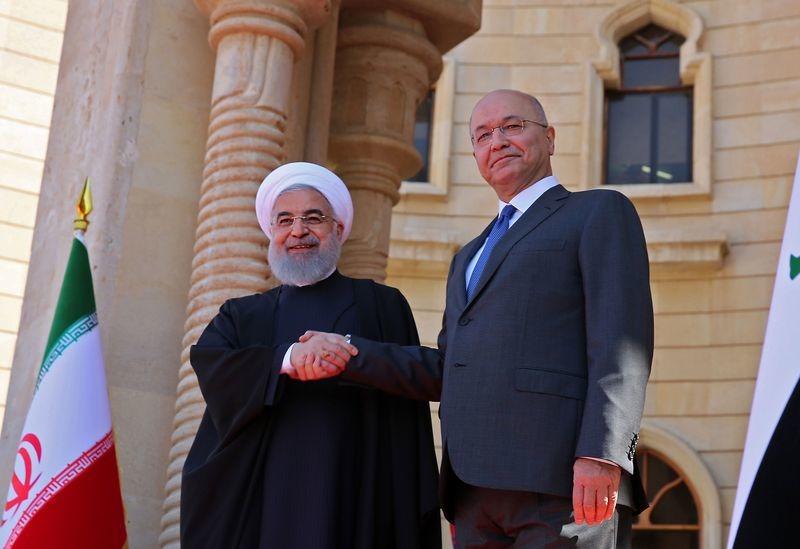 The key is oil. For the Saudis, Iraq’s drive to rehabilitate its war-ravaged industry to become the third-largest crude producer by 2030 presents an untapped market for Saudi products and companies. Iraq has said that its US$14 billion worth of energy projects are open for competition.

After Iran cut off power to Iraq because of payment disputes in last year, Baghdad turned to Saudi Arabia, which offered it at a fraction of Iranian prices.

As part of its outreach to Iraq, Saudi Arabia has also softened its position on Shi'ite Islam, long seen as antithetical to the official Wahhabi creed of the kingdom. In a nod to its often restive Shi'ite minority mainly in the east, Riyadh plans to open a consulate in the Iraqi holy city of Najaf, to which many Saudi Shiites travel for pilgrimage.

Government-backed clerics and televangelists who would regularly dismiss Shi'ites as heretics have either fallen silent or publicly disavowed their former positions.

Still, Saudi Arabia continues to detain and even execute Shi'ites in large numbers on suspicion of spying for Iran, among other charges. But notably, Iraq has lately refrained from publicly criticizing Saudi Arabia’s treatment of its Shi'ites.

“We have different views from before,” said Al-Nahas. It follows the July 2017 visit of firebrand Shi'ite cleric Muqtada Al Sadr, who was invited to Jeddah by the crown prince, publicly embracing one of Iraq’s most powerful political figures. “It was a sign toward Iraq in general,” Al-Nahas said.