The development of three national parks covering the Great Wall, the Beijing-Hangzhou Grand Canal and the route of the Long March will enable better protection of endangered cultural relics and bring them closer to the general public, officials and experts said.

China plans to complete construction of the parks by 2023 to enable protection, inheritance and exploitation of the three cultural icons' relics and resources

A document issued by the general offices of the Communist Party of China Central Committee and the State Council earlier this month said the country plans to complete construction of the parks by 2023 to enable protection, inheritance and exploitation of the three cultural icons' relics and resources.

The plan, a preliminary step for pushing forward the development of national culture parks across the board, also called for systematic efforts to promote research, cultural and tourism development and digital reconstruction of cultural relics.

After it was issued, a senior central government official said a key part of the plan is to scale up protection projects, especially for relics that have been damaged or are endangered.

Protective precautions will be adopted for key historic relics, and improper development and commercialization of heritage sites will be banned, the official said.

To bring the relics closer to the public, authorities will encourage the organization of themed activities during major holidays and celebrations as well as live shows in suitable areas.

The digital reconstruction of the relics will include efforts to develop official websites and digital cloud platforms showcasing the relics and cultural resources. Information about historic figures, poems, classics and documents will also be displayed. 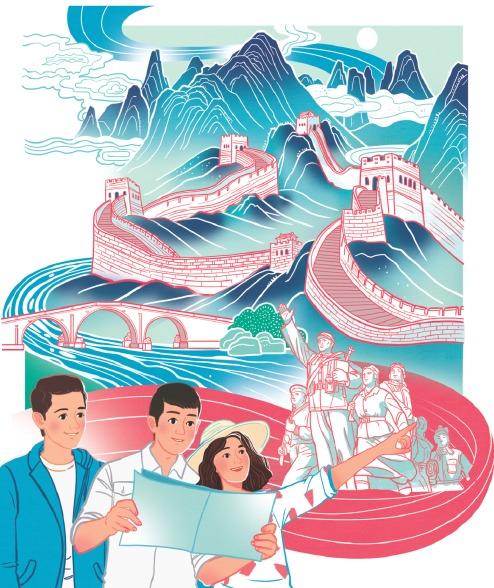 The Great Wall and the Grand Canal have both been under severe threat from natural and human factors.

The Great Wall began as separate fortifications around the 7th century BC that were joined up during the Qin Dynasty (221-206 BC). Its bestknown sections were built by the Ming Dynasty (1368-1644).

About half of the Great Wall has already vanished or is on the verge of disappearing, according to a general plan on the protection of the Great Wall issued this year. In addition to natural factors such as erosion and geological disasters, tourism development, urban construction and infrastructure development have posed threats to the Great Wall.

The Grand Canal, like the Great Wall a UNESCO world heritage site, is the longest and the oldest man-made waterway in the world. The oldest parts of the canal date back to the 5th century BC, but the various sections were first connected during the Sui Dynasty (581-618).

Huang Runqiu, vice-minister of ecology and environment, said in June that the large number of chemical and papermaking industries along the canal had been a source of industrial waste for the canal's water bodies, with a lack of waste water treatment facilities aggravating the pollution problem.

The Long March, a military maneuver carried out by the Red Army and led by the CPC to combat the Kuomintang regime, covered over 12,500 kilometers from October 1934 to October 1936.

There will be sections of the three parks in different provincial-level areas.

The Great Wall park will cover 15 regions, including Beijing and Tianjin, the provinces of Hebei and Shanxi, and the Inner Mongolia autonomous region.

Tang Yuyang, a professor at the Academy of Cultural Heritage at Beijing University of Civil Engineering and Architecture, said the three cultural heritage sites have irreplaceable value in Chinese history.

"Spread over wide geographical areas and composed of rich cultural relics, the three parks are closely related to the natural ecology and environment and closely connected to modern urban and rural residential areas," she said.

She said planning the development of the three heritage sites would enable more coordinated protection and better sharing of their resources with the general public.

To enable the completion of the three cultural parks by the end of 2023, it would be important to come up with detailed targets, research the scope of implementation and key areas and further explore the value of cultural resources, Tang said.

Huang Jie, who researches the Grand Canal at Yangzhou University in Jiangsu province, said it is important to prevent overexploitation of cultural heritage during the development process.

"The development of tourism and ecological sectors must be conducted in an appropriate manner on the premise of not affecting the protection of the heritage sites," he said.