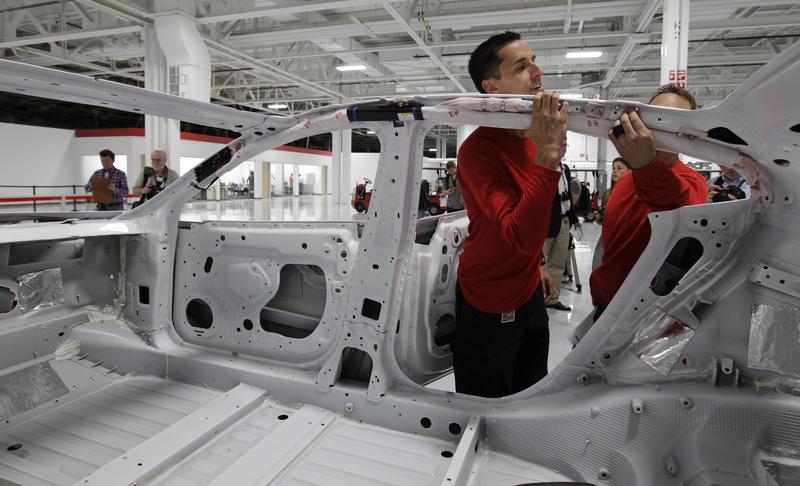 In this undated photo, a worker inspects a Tesla Model S at the automaker's factory in Fremont, California. (PHOTO / AFP)

Tesla Inc will start partial production in China in the second half of next year, the Shanghai municipal government said on Wednesday, as the US electric vehicle maker advanced its push in the world's largest auto market.

Land leveling has basically been completed and site construction is on schedule to go ahead, the local authority said in a WeChat post describing a visit by Shanghai Mayor Ying Yong and Vice-Mayor Wu Qing.

After listening to briefings from company representatives and checking on popular models, the officials encouraged the acceleration of the plant's construction on the premise of ensuring production safety and project quality, the post said.

Tesla confirmed the latest developments with China Daily on Thursday, saying these accorded with an earlier statement made in its quarterly results to speed up the manufacturing timeline in China in order to "significantly increase the affordability of the Model 3".

"We are aiming to bring portions of Model 3 production to China during 2019 and to progressively increase the level of localization through local sourcing and manufacturing," the automaker said in late October. "Production in China will be designated only for local customers."

In July, Tesla Chief Executive Officer Elon Musk signed an agreement in Shanghai to open Tesla's "Gigafactory 3" in the city, with the capacity to produce 500,000 electric vehicles a year.

It then secured a roughly 865,000-square-meter site in the suburban Lingang Area, becoming the largest ever foreign-invested manufacturing project in the city.

The latest development indicated the US company has accelerated its plans for the plant.

It previously estimated it would take around two years before the Shanghai plant started production and then another two to three years before the factory was fully ramped up to produce around 500,000 vehicles annually for Chinese customers.

To drive localization, Tesla has also launched a WeChat account for hiring local staff. In November, the account released around 30 job vacancies for its Shanghai factory, including quality control and project construction-related posts, as well as administrative titles such as senior human resource managers.

New-energy cars, which include battery-powered, plug-in hybrid and fuel-cell vehicles, are gaining popularity in China. Sales of these models reached 777,000 units last year and could surpass the 1-million mark in 2018, according to the China Association of Automobile Manufacturers.

Production in China will help the electric-car maker to avoid unfavorable pricing involved with importing vehicles. Last month, it announced it would cut the prices of its new Model S and Model X in China by up to 25 percent to absorb "a significant part of the tariff to help make our cars more affordable for customers in China".