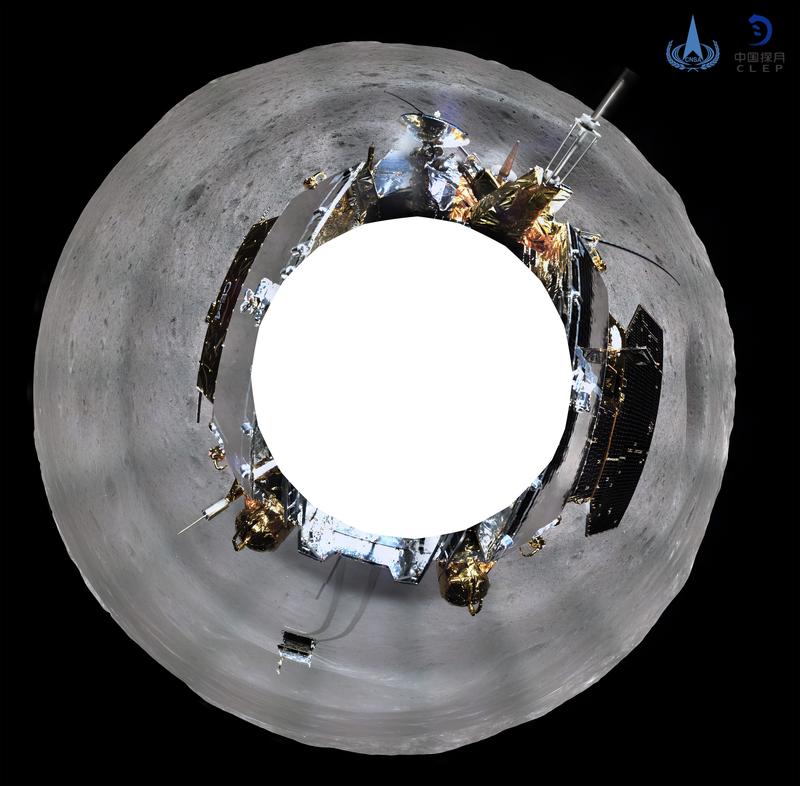 This photo taken by a camera installed on the top of the lander of Chang'e-4, captures a 360-degree panoramic photo of the terrains and landform surrounding of the probe. (PHOTO / XINHUA)

BEIJING — Images sent back from China's Chang'e-4 show that the first-ever probe to soft-land on moon's far side is surrounded by lots of craters of different sizes, which pose a great challenge for future exploration of the lunar rover Yutu-2.

The probe, comprised of a lander and a rover, touched down at the preselected landing area at 177.6 degrees east longitude and 45.5 degrees south latitude in the Von Karman Crater in the South Pole-Aitken (SPA) Basin on the far side of the moon on Jan 3.

From the panorama, we can see the probe is surrounded by lots of small craters, which was really thrilling

One of the published images is a 360-degree panorama which was pieced together from 80 photos taken by a camera on the lander after the rover drove onto the lunar surface, according to Li Chunlai, deputy director of the National Astronomical Observatories of China and commander-in-chief of the ground application system of Chang'e-4.

"From the panorama, we can see the probe is surrounded by lots of small craters, which was really thrilling," said Li.

One of the craters close to the rover Yutu-2 has a diameter of about 20 meters and a depth of about 4 meters. The rugged terrain will pose great challenges for planning the route of the rover, said Li.

Compared with the landing site of Chang'e-3, which was sent to the Sinus Iridum, or the Bay of Rainbows, on the moon's near side, fewer rocks can be found in the area surrounding Chang'e-4, indicating the landing area of Chang'e-4 might be older, said Li.

He said the Chang'e-4 landed at an altitude of nearly minus 6,000 meters. The deepest region on the moon, where there is an altitude of minus 9,100 meters, is about 700 kilometers to the south of the probe.

"The information from the depths of the moon will be one of our focuses in the exploration," said Li.

This photo provided by the China National Space Administration on Jan 11, 2019, captures a rectangular projection of the terrains and landform surrounding of Chang'e-4. (PHOTO / XINHUA)