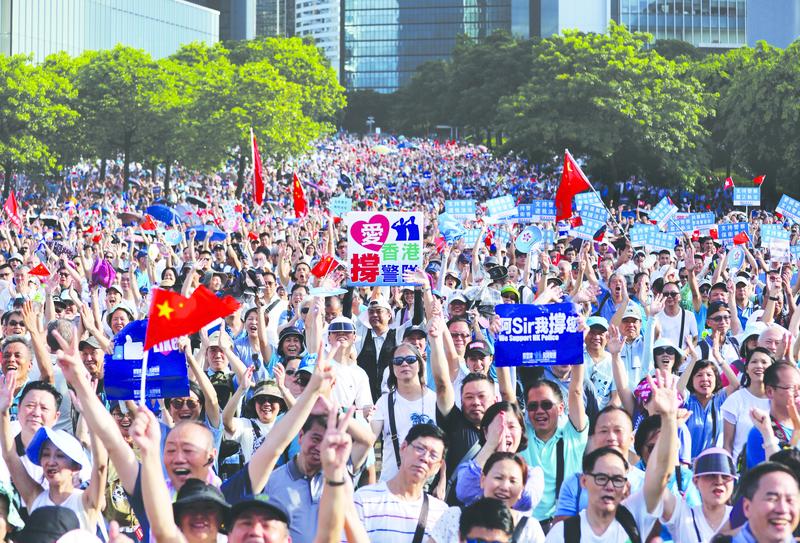 About 165,000 people from all over Hong Kong braved humid, sometimes rainy weather on Sunday to rally and show their support for the city’s police following recent attacks and abuse targeting officers.

Hong Kong law enforcers have been experiencing tough times as continued protests over the now-suspended extradition law amendment bill has degenerated into hostility toward police officers through insulting, provocative behavior and even online intimidation.

It was upsetting to see the police’s years of hard work to maintain law and order in the city being dismissed and disrespected ... Despite constant provocation and insults, officers still remained restrained and professional ... Sir, madam, we support you!”

During the three-hour gathering starting at 3 pm at Tamar Park in Admiralty of the Hong Kong Special Administrative Region, participants dressed in white and blue were seen holding high placards reading: “We support Hong Kong police!” and waving national flags and Hong Kong regional flags despite outbreaks of heavy rain.

A hymn for the police

Speaking on stage, Tang said he was saddened by recent hostility toward the police.

In the past two weeks, police headquarters in Wan Chai has been besieged twice, with the building’s entrances blocked by the protesters. They also threw eggs and bottles at the building’s wall, flashing laser beams at the eyes of hundreds of officers.

Tang said it was upsetting to see the police’s years of hard work to maintain law and order in the city  being dismissed and disrespected. He added that despite constant provocation and insults, officers still remained restrained and professional. He shouted enthusiastically after the speech: “Sir, madam, we support you!”

Lawmaker Junius Ho Kwan-yiu, who co-organized the gathering, said he didn’t expect to see so many people turning up to back the police.

The message of supporting the police was well delivered at the rally, Ho stressed. He praised officers for diligently performing their duties despite facing provocation and insults.

He hopes people with different opinions can put aside their differences and stand together to help the society move forward. He also cautioned the opposition camp not to mislead students.

Besides political leaders, the activity also attracted prominent figures from other sections of the society.

Renowned actor and singer Alan Tam Wing-lun, 68, said on stage that as an individual of the generation who had witnessed the city’s past development, he considered attacks against police totally “unacceptable”. If this unrest continued, Hong Kong could experience real chaos, he warned.

Lo Chung-mau, hospital chief executive of the University of Hong Kong-Shenzhen Hospital, told reporters he joined the rally, in hopes that Hong Kong’s rule of law would be respected and cherished.

He also encourages some citizens to reflect on whether their recent actions defied their original intentions — to protect Hong Kong’s freedom and rule of law.

Lee Tsz-king, a member of the Sham Shui Po District Council, told China Daily the gathering is to let police know that many citizens stand behind them. “They have done nothing wrong”, added Lee.

“Through this gathering, we want to voice our support for them so that they’ll keep protecting the community’s stability and rule of law. We also hope they will continue to take the right action against people who break the law,” Lee said.

Toast to their dedication

The Office of the Commissioner of the Ministry of Foreign Affairs of PRC in HKSAR also paid tribute to police on Sunday.

In a post published on its official social media page, it wrote that the efforts of professional and dedicated police officers had made Hong Kong one of the safest cities in the world.

“They are ordinary people, who could be the children, parents, brothers or sisters of anybody in the city. But once they put on their uniforms, they have put aside the personal feelings and thrown their hearts and souls to safeguard the city’s stability and the rule of law. They really deserve our respect,” the post reads.