Japan ties to include currency trade 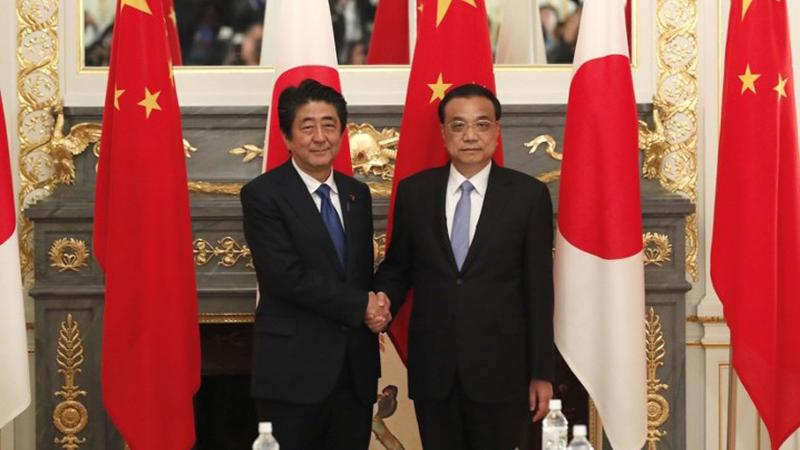 Premier Li Keqiang announced in Tokyo on Wednesday that China has agreed to grant a quota of 200 billion yuan (US$31.4 billion) to be used in the renminbi qualified foreign institutional investor mechanism by Japanese investors.

During his meeting with Japanese PM Shinzo Abe, Li also said China supports Japanese financial institutions investing in the Chinese capital market and has a positive attitude toward setting up a bank in Tokyo for renminbi clearing.

At a joint news conference with Abe on Wednesday, Li said China and Japan have reached consensus in principle to sign a bilateral currency swap agreement as soon as possible.

China and Japan signed 10 agreements on a wide range of areas, such as social security, culture and agriculture.

Li invited Abe to visit China at an appropriate time, and Abe accepted the invitation.

The premier also said the two countries should abide by the four political documents and the consensuses they have reached and restore their ties to a normal track.

The two countries should consolidate the political foundation and expand cooperation, Li added. They should undertake practical actions to prove they are partners rather than threats to each other.

The healthy development of ties between the two countries, which are neighbors and important economies, are in line with the interests of both, and with regional and global peace and stability, the premier said.

This year marks the 40th anniversary of the signing of China-Japan Treaty of Peace and Friendship, and the bilateral ties are at an important stage for further improvement, Li said.

Also, Li announced on Wednesday that China will give Japan two crested ibises as a gift and symbol of China's friendship with the Japanese people.

The gift is the first of its kind in 11 years. China last offered a pair of crested ibises, Huayang and Yishui, in 2007 when former premier Wen Jiabao visited Japan and had talks with Abe, who was in his first term as Japanese prime minister. Crested ibises are native to Japan, where they are called toki, but were declared extinct in 2003 after the sole remaining bird died in Sado, Niigata prefecture. The crested ibises now living in Sado and on the mainland of Japan are descendants of five crested ibises presented by China.

The visit to Japan is Li's first since he became premier in 2013 and the first for a Chinese premier in eight years.

"Through my visit, I want to promote a sound and stable development of our bilateral relationship for the long term," he said.