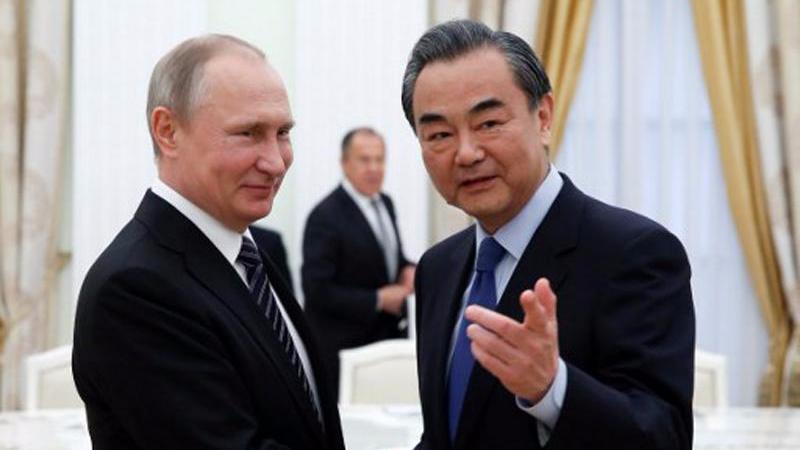 Russian President Vladimir Putin (left) shakes hands with Chinese Foreign Minister Wang Yi during a meeting at the Kremlin in Moscow on May 25, 2017. (Maxim Shemetov / AFP)

MOSCOW - Roughly three months ahead of a BRICS - the acronym for an association of five major emerging national economies: Brazil, Russia, India, China and South Africa - summit to be held in China, Russian analysts saw huge potential to increase and diversify economic cooperation between Russia and China.

Vast opportunities can be created during the development of the China-proposed Belt and Road Initiative and the process of Russia's import substitution industrialization, experts said, adding that closer economic ties between the two strategic partners will be mutually beneficial.

Sergei Luzyanin, director of the Far Eastern Studies Institute of the Russian Academy of Sciences

They also believe China-Russia trade should be expanded to more non-energy sectors so that bilateral economic cooperation can develop in a sustainable way.

These remarks were made at a time when BRICS countries are busy preparing for the ninth summit of the bloc's leaders on September 3-5 in Xiamen, east China's Fujian province.

The development of transport facilities is one of the key problems Russia faces, given its vast territory and low quality of roads and railways.

"Chinese investment and joint projects will play a major role in the vast areas of Siberia and the Far East, as well as in other parts of Russia," said Sergei Luzyanin, director of the Far Eastern Studies Institute of the Russian Academy of Sciences.

Luzyanin pinned high hopes on the Belt and Road Initiative, which can "greatly stimulate the development of infrastructure."

Russia responded to Western sanctions following its annexation of Crimea in 2014 with a so-called "import substitution" policy in various sectors in a bid to boost domestic industrial production.

"This is beneficial for both sides as Chinese businesses will achieve a higher profit rate and the ability to sell products to China, and Russia will get investment and new jobs," said Monkevich.

According to the Chinese Ministry of Commerce, Chinese companies invested more than US$100 million in Russia between January and April 2017.

"We see a serious interest in Russia-China cooperation from business circles of both countries," said Monkevich.

Trade between China and Russia jumped 26.2 percent year on year to US$24.7 billion in the first four months of 2017, according to China's General Administration of Customs.

In addition to oil and gas, Russian analysts saw the possibility of expanding bilateral trade to more areas.

"RAUIE members often turn to us with requests for export of sunflower oil, honey, ice cream, confectionery and alcohol ... We see a great potential for the development of exports other than raw materials," said Monkevich.

As for space cooperation between Russia and China, Sergei Luzyanin expects joint manned stations and joint missions in the future.

"All this together creates a new quality for the growth of Russia-China cooperation. We can deal with oil and gas and talk about diversifying cooperation at the same time," said Luzyanin.

Wang echoed Putin's appeal, saying that Russia and China should further deepen cooperation in such fields as trade and investment and explore new sources of economic growth.