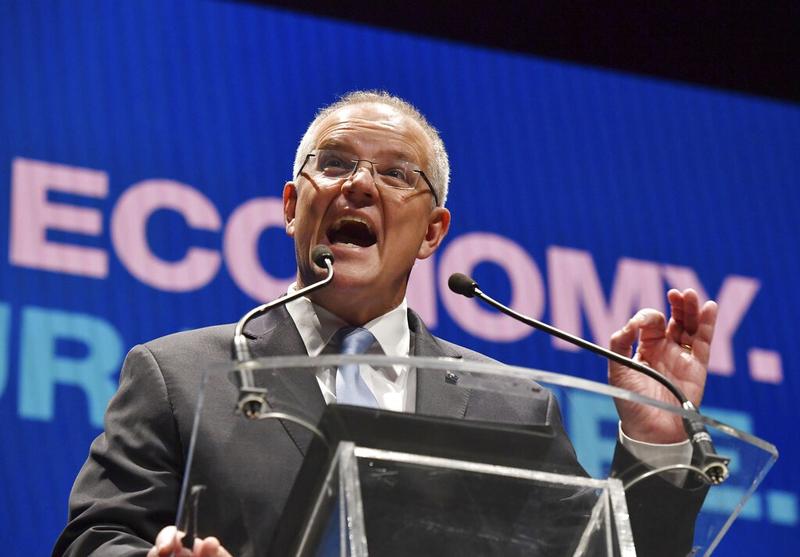 Australian Prime Minister Scott Morrison speaks during the launch of his Liberal Party campaign at the Melbourne Convention Centre in Melbourne, Australia, May 12, 2019. (MICK TSIKAS/AAP IMAGE VIA AP)

CANBERRA — Australia's prime minister on Sunday officially launched his conservative coalition's campaign less than a week before an election in an extraordinarily personal presentation.

Scott Morrison is his government's third prime minister in the administration's six years in office and still remains relatively unknown to many Australians, who he is asking for a third three-year term when they vote on Saturday next week.

The coalition's launch in the city of Melbourne at a convention center included recorded interviews with Morrison family members that covered his wife Jenny's diagnosis with endometriosis, their 14-year failed battle to conceive through IVF before having their two daughters naturally, and Jenny Morrison's brother's struggle with multiple sclerosis.

Morrison, a policeman's son, also spoke of his modest upbringing in Sydney and sharing a bedroom until he was in high school with an older brother who was studying at university.

"Life's about what you contribute, not what you accumulate. That's what mum and dad have taught me," Morrison told a gathering of government ministers and supporters of his Liberal Party.

Morrison was joined on the stage by his mother Marion Morrison, his wife and daughters Abbey, 11, and Lily, 9. He said his father John Morrison was "too frail" to attend. Morrison gave his mother and wife bouquets of flowers to acknowledge Mother's Day in Australia.

READ MORE: Australian election May 18 to be fought on refugees, economy

The government argues that the center-left opposition Labor Party's policy of reducing tax breaks for landlords would steepen a current downturn in house prices in major cities.

Morrison described the election as a choice between him and opposition leader Bill Shorten as prime minister.

"The choice between a government that knows how to manage money, has returned the budget to surplus and will now pay down debt," Morrison said. "Or Bill Shorten and Labor, whose reckless spending and higher taxes will put all of that risk at the worst possible time."

The government in April outlined an economic plan that would balance the books in the next fiscal year for the first time in 12 years. Labor has promised to deliver bigger budget surpluses by reducing tax breaks for landlords and some shareholders.

The bitter divisions within the Liberal Party that thrust Morrison into power in August last year were still evident at the launch on Sunday.

None of the three surviving former Liberal prime ministers attended. John Howard is Australia's second-longest serving prime minister who spent 11 years in office until his government was defeated at elections in 2007. Tony Abbott spent three years in office before he was dumped by party colleagues in 2015 in the face of dismal opinion polling. He was replaced by Malcolm Turnbull, who was similarly dumped by colleagues last year.

Morrison is hoping his personal charisma will persuade people to vote for his Liberal Party candidates, but opinion polls suggest they prefer Labor despite misgivings about Shorten as leader.

Shorten is a former labor union leader who turned 52 on Sunday. Morrison is a former tourism marketer who turns 51 on Monday. Both were first elected to Parliament at the 2007 election that ended Howard's government and decades of relative political stability.

Shorten addressed a campaign rally in Melbourne on Sunday in which he focused on Labor's pledge to reduce Australia's greenhouse gas emissions by 45 percent below 2005 levels by 2030. The government has committed to reduce emissions by 26 percent to 28 percent in the same time frame. Climate change did not feature in Morrison's launch.

Opinion polls suggest that climate change is a growing concern for voters, but is a divisive policy issue among the conservatives who are split between those who give priority to reducing emissions and those who want the lowest possible power prices.

"There are now six days to win this election, end the chaos and change the country for the better," Shorten said in his own Melbourne seat." The only way the Liberals will learn to take climate change seriously is to lose this election."