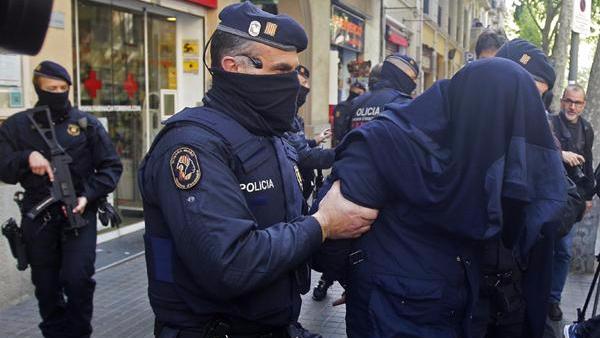 Police said the arrested were one Spaniard and eight Moroccans living in Catalonia between 30 and 40 years old.

A regional police spokeswoman said at least four of the detained are suspected of being linked to people arrested following the 2016 Brussels airport and subway attacks that killed 32 people and wounded 300 others. The officer spoke on condition of anonymity in keeping with police regulations.

Regional police spokesman Josep Lluis Trapero told TV3 regional television that four of the detained were clearly members the Islamic State group. He said the arrests could help solve investigations into attacks in France and Belgium.

Trapero said the group was also being investigated for drug trafficking and other crimes.

A police statement said police made 12 raids in five Catalan towns including the regional capital, Barcelona.

It said the arrests followed an eight-month investigation in coordination with Belgian police.

Spanish police have arrested some 200 suspected jihadis since Spain raised its national security alert to one step below the maximum in 2015.