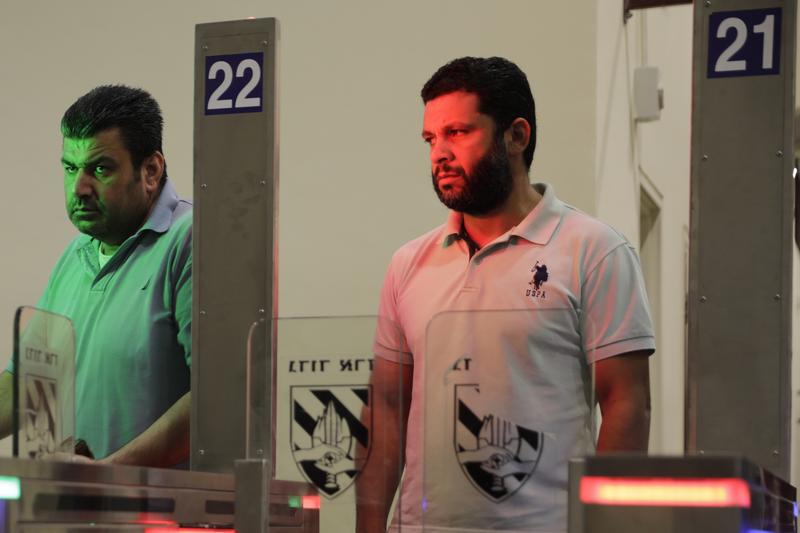 In this July 11, 2019 photo, Palestinians stand in front of a biometric gate as they enter Israel at the Qalandia crossing in Jerusalem. (SEBASTIAN SCHEINER / AP)

QALANDIA CROSSING — It's just after 6 am and a Palestinian man's face is momentarily bathed in crimson light, not by the sun rising over the mountains of Jordan, but by a facial recognition scanner at an Israeli checkpoint near Jerusalem.

The Israeli military has installed the face scanners as part a multimillion dollar upgrade of the Qalandia crossing that now allows Palestinians from the West Bank with work permits to zip through with relative ease.

But while the high-tech upgrades may have eased entry for Palestinians going to Israel for work, critics say they are a sign of the ossification of Israel's 52-year occupation of the West Bank and slam the military's use of facial recognition technology as problematic. 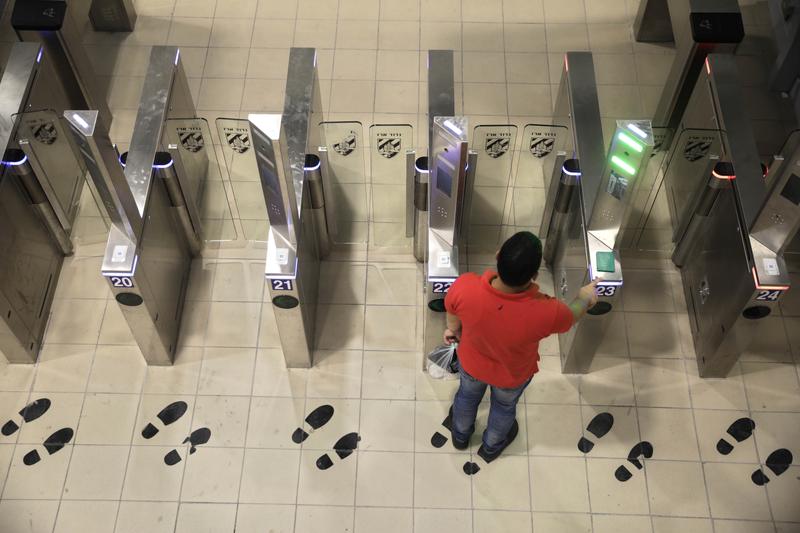 In this July 11, 2019 photo, a Palestinian man uses a biometric gate as he crosses into Israel at the Qalandia crossing in Jerusalem. (SEBASTIAN SCHEINER / AP)

Qalandia is one of the main crossings for the thousands of Palestinians who enter Israel each day for a variety of reasons, including work, medical appointments or family visits.

Among Palestinians, the heavily fortified crossing is seen as a symbol of Israeli occupation and has long been notorious as a human logjam, where workers would wait for as much as two hours in order to pass into Israeli-controlled Jerusalem.

Palestinian laborers from around the West Bank who had permits to work in Israel would wake up in the middle of the night to arrive at the crossing before daybreak. Metal fenced entryways were often packed with people before dawn, waiting for the gates to open. Human rights groups deplored the conditions at Qalandia.

Israel's Defense Ministry poured over US$85 million into upgrading Qalandia and several other major checkpoints between Israel and the West Bank in recent years — part of a strategy it says is meant to maintain calm by improving conditions for Palestinians.

Thanks to the upgrades, crossing through Qalandia takes roughly 10 minutes, even during the early morning rush hour, and has the feel of an airport terminal. While much of the rest of Jerusalem is still asleep, hundreds of Palestinian laborers stream through each morning on foot or riding bikes, buses and cars into Israel for work.

Jamal Osta, a 60-year-old from the northern West Bank city of Nablus, works as a blacksmith in an industrial park in east Jerusalem not far from Qalandia.

The new system is substantially better but is another indication that Israel's occupation has no end in sight, he said. The Palestinians seek the West Bank as the heartland of a future state, with east Jerusalem as their capital. 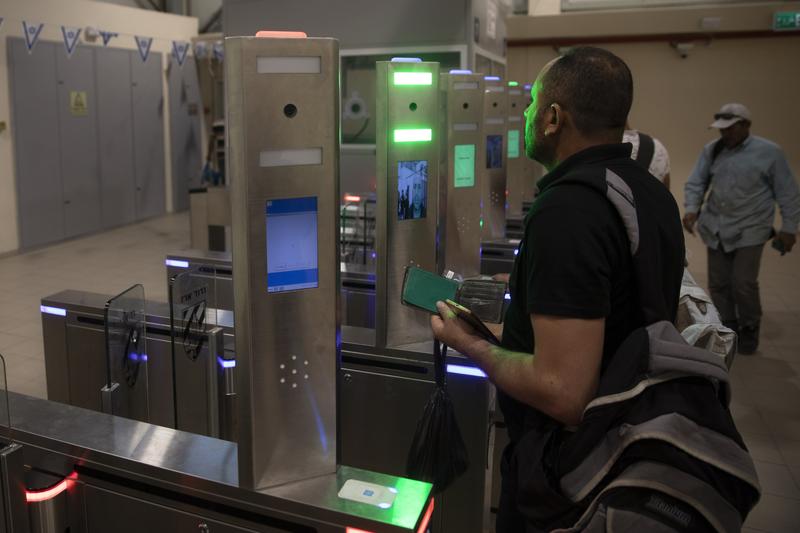 In this, July 11, 2019 photo, Palestinians stand in front of a biometric gate as they enter Israel at the Qalandia crossing in Jerusalem. (SEBASTIAN SCHEINER / AP)

"Qalandia today looks like an international crossing. You feel like you are entering a new country," Osta said. "This is not an interim thing, apparently it's final."

COGAT, the Israeli military body responsible for civilian affairs in the West Bank, granted over 83,000 permits to West Bank Palestinians to work in Israel in June.

Many Palestinians seek employment in Israel, where there are more jobs and much higher wages than in the West Bank. On a given day, an estimated 8,000 cross at the Qalandia crossing alone.

In exchange for this benefit, however, Palestinians seeking work in Israel must receive biometric identification cards, the only way to pass through Qalandia, according to Israel's Civil Administration, which manages the crossing.

After passing through a security check — a metal detector and baggage scanner — the workers place their magnetic ID cards on a scanner and face a camera. A glow of red light emanates from a display as facial recognition software confirms the permit holder's identity and opens a turnstile.

The cameras and database are being used to identify and track potential Palestinian assailants, according to the report. 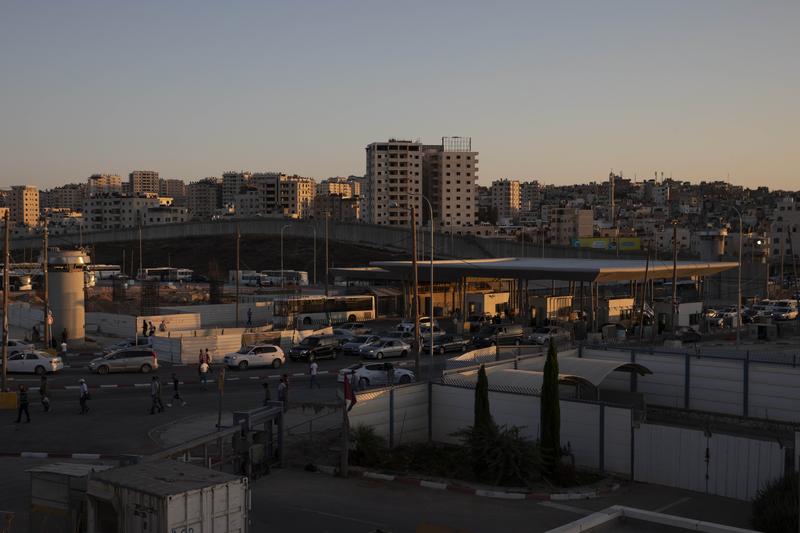 In this July 11, 2019 photo, cars pass the Qalandia crossing between the West Bank city of Ramallah and Jerusalem. (SEBASTIAN SCHEINER / AP)

COGAT confirmed the use of facial recognition technology at the crossing, but declined to discuss the details of the biometric database or say whether the data is used beyond the crossings. The Defense Ministry, the army and the Shin Bet internal security agency also declined comment.

B'Tselem, an Israeli human rights group, said it was unacceptable that the Palestinian laborers have no ability to object to the use of facial recognition technology. Roy Yellin, a spokesman for the group, called the company's development of its product through "unwilling subjects" immoral.

For Najah al-Mahseri, 62, from a town near Ramallah, giving the Israeli military his biometric data was a fair trade for a steady job in Israel.

"I have no problem at all. This is my life and if I want to work here, I have to follow the rules and I have no problem doing that," Mahseri said. "This is the life Palestinian workers in Israel live."