Amendment ‘in line with Basic Law’ 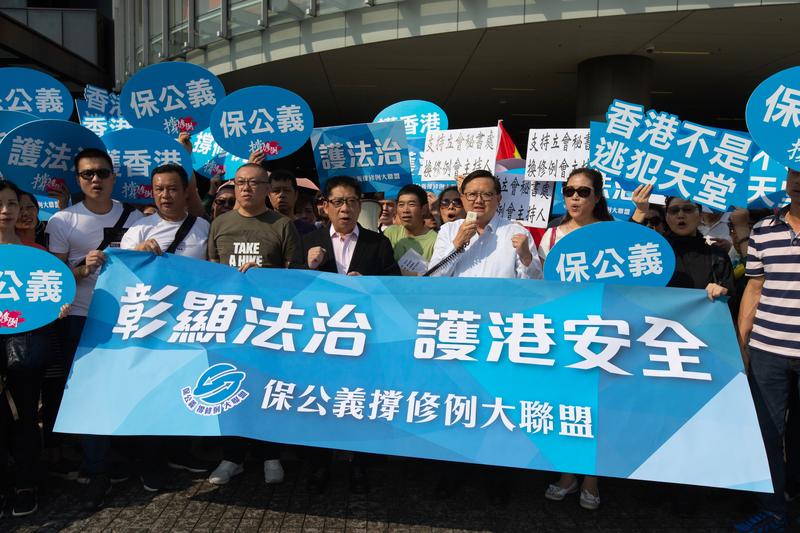 Hong Kong residents voice support for the fugitive law revision outside the Legislative Council of the special administrative region on May 11, 2019. (ROY LIU / CHINA DAILY)

The deputy head of the Basic Law Committee has voiced support for amendments to legislation on fugitives in the Hong Kong Special Administrative Region, saying it is in line with the Basic Law and is urgently needed.

The SAR has proposed revising the Fugitive Offenders and Mutual Legal Assistance in Criminal Matters ordinances to plug legal loopholes that have prevented extraditions of fugitives between Hong Kong and Taiwan, Macao and the Chinese mainland. The proposed amendments would enable the city to surrender criminal suspects on a case-by-case basis to all jurisdictions worldwide.

Article 95 of the Basic Law stipulates that the SAR may maintain juridical relations — through consultations and in accordance with law — with judicial organs elsewhere in China, and they may render assistance to each other.

The SAR has yet to establish such mutual legal assistance almost 30 years after the Basic Law was published in 1990, Zhang said. This is “inappropriate and should be rectified,” he said.

Reality shows the need for such revisions, said Zhang, referring to the case of a Hong Kong man who was suspected of killing his girlfriend in Taiwan and escaped legal action by returning to the SAR.

Chen Dong, deputy director of the Liaison Office of the Central People’s Government in the HKSAR, said plugging loopholes will protect the rule of law in Hong Kong and enhance the city’s reputation for being governed by it.

Chen, who also attended Saturday’s seminar, said Hong Kong should be a shopping haven, not a safe haven for criminals.

Zhang said, those who have Hong Kong’s interests in mind would not want to see the city serving as a safe haven for criminals.

The proposed revision won city-wide backing, with more than 220,000 people signing a petition in its favor.

However, a meeting of the Legislative Council’s bills committee that had convened to scrutinize the amendments descended into chaos on Saturday and had to be adjourned until Tuesday after the opposition camp hijacked the meeting.

Opposition lawmakers had camped in the meeting room the previous night, and on Saturday morning physically barred 73-year-old lawmaker Abraham Shek Lai-him from presiding over the meeting to select a chairman for the bill committee, which was set up in April.

Following the incident, the Hong Kong SAR government and political heavyweights on Saturday expressed “utmost regrets” over the chaos.

Describing it as “unprecedented”, a government spokesperson called on lawmakers to adopt a rational approach and resolve the differences in peaceful talks.

The spokesperson said that the legislature has a constitutional responsibility to exercise its duties and the right to make, revise and abolish laws in accordance with the Basic Law and relevant laws.

Shek, of the Business and Professionals Alliance for Hong Kong, said that in his 19 years as a lawmaker he had never seen such a deplorable incident in the LegCo.

LegCo President Andrew Leung Kwan-yuen said he was saddened by the chaos and called for a pragmatic approach to deliberating on the revision of law.

The LegCo should be a place for rational discussions, Tam said.

Li Bingcun contributed to this story.