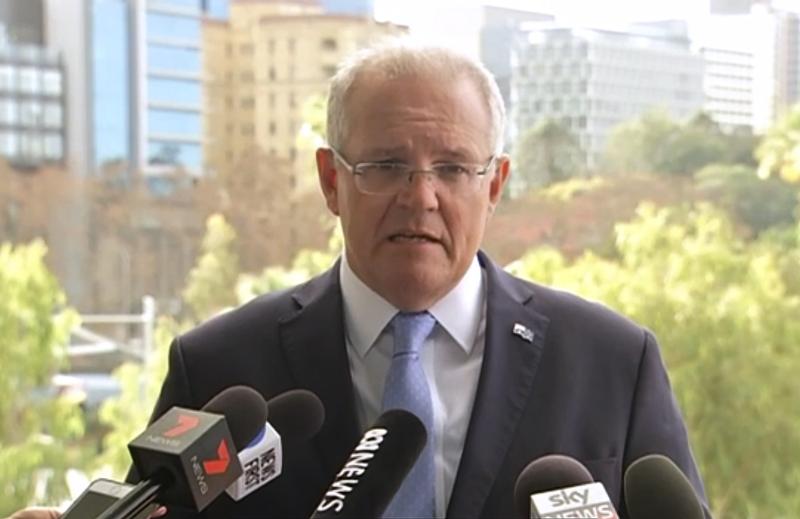 Prime Minister Scott Morrison said the eight children being repatriated were in the care of Australian government officials. He would not identify the children or say when they would reach Australia.

Media reported that they include five children and grandchildren of Sydney-born convicted terrorist Khaled Sharrouf and three children of Islamic State group fighter Yasin Rizvic, from Melbourne. Both men and their wives died in the conflict zone.

The opportunity now is for these young children who are coming back to Australia, they can't be held responsible for the crimes of their parents

The children had been taken by an aid agency on Sunday to Iraq, The Australian newspaper reported.

"The opportunity now is for these young children who are coming back to Australia, they can't be held responsible for the crimes of their parents," Morrison told reporters.

The children would be provided with support services so that "they can fully integrate into a happy life in Australia," Morrison said.

Morrison had for months said he would not risk any Australian official to rescue Australians from Islamic State group-held territory.

Critics had argued that he had not been prepared to take the political risk of repatriating families of Islamic extremists until he won a narrow election victory on May 18.

Morrison said on Monday he had kept his government's efforts "very low-key" in the interests of the safety of everyone involved, including the aid agencies that had helped the government.

Sharrouf's Sydney-based mother-in-law Karen Nettleton has launched several attempts to rescue the children from Syria and has led the campaign for Australian government intervention.

Her lawyer Robert Van Aalst said he hoped Nettleton was with the children in Iraq, but had no direct communication with her due to security concerns.

The eldest child, Zaynab, turned 18 last week and has been expecting her third child. Australian Broadcasting Corp. reported she'd yet to give birth.

Zaynab would return to Australia with the newborn, her two children — Ayesha, 3, and Fatima, 2 — her 16-year-old sister Hoda, and her 8-year-old brother, Humzeh.

"There will be medical examinations and various other support provided by the government which they have told us about to help the children acclimatize," Van Aalst told ABC.

The Rizvic children are two boys and a girl aged between 6 and 12, The Australian reported.

Clarke Jones, an Australian National University criminologist who specializes in radicalization, said the children would need treatment for trauma and could be radicalized. They could also be threatened by elements of the Australian community.

"There are a lot of people who don't want them back at all," Jones said. "Because of that, they would also be under threat."

Australian National University counterterrorism researcher Jacinta Carroll wrote in a research paper last week that Zaynab had become both a victim and supporter of terrorism in a case that was legally and morally complex.

Zaynab became a prominent Islamic State group propagandist making social media posts supporting atrocities and the activities of her father and her husband Mohamed Elomar, an Australian Islamic State group fighter who was killed while she was pregnant in 2015, Carroll said.

She had lived a relatively privileged life under the Islamic State regime in Syria in a house with slaves, posting photographs of herself with other veiled women with assault rifles and a luxury BMW sedan. She boasted a "luxury jihad" life in Syria, Carroll said,

Carroll said disengagement services, also known as deradicalization programs, were available in Australia to help the children integrate into the mainstream Australian community.

"I think that will be very challenging for the Sharroufs," Carroll said. "The profile and the publicity around this family will also make it quite problematic for them to just integrate back into normal life in Australia."

Mat Tinkler, director of the Save the Children Fund charity, said there were at least 50 Australian women and children in Syrian refugee camps and all should be repatriated.

Khaled Sharrouf horrified the world in 2014 when he posted a photograph on social media of his young son clutching the severed head of a Syrian soldier.

Then-US Secretary of State John Kerry described that image as "one of the most disturbing, stomach-turning, grotesque photographs ever displayed."

Sharrouf's wife, Tara Nettleton, brought their five children from Sydney to Syria in 2014. She died in a hospital a year later of a perforated intestine. Her husband and two eldest sons later died in an airstrike.