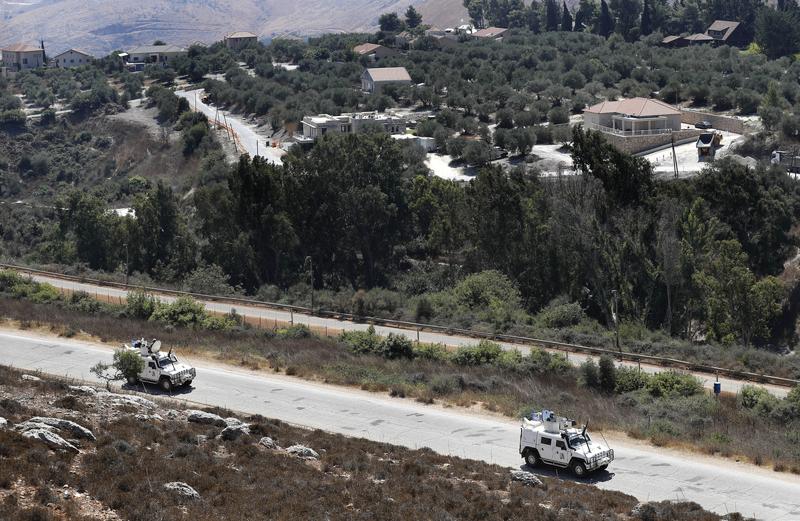 Spanish UN peacekeepers patrol along the Lebanese-Israeli border, with the Israeli village of Metulla, background, in the village of Kfar Kila, Lebanon, Sept 2, 2019. (HUSSEIN MALLA / AP)

BEIRUT — Hezbollah said it downed an Israeli drone in southern Lebanon on Monday in the latest flare-up raising tensions between the Iran-backed group and Israel.

Any new war between Israel and Hezbollah would raise the risk of a wider conflict in the Middle East, at a time when Iran is defying US attempts to force it to renegotiate a 2015 nuclear deal it reached with world powers

The drone is now in Hezbollah's possession, the group said in a statement.

The incident happened a week after Hezbollah and Israel exchanged cross-border fire marking their fiercest shelling exchange since the 2006 Lebanon war.

An Israeli military statement said one of its drones "fell inside southern Lebanon during routine operations". It did not say why the drone crashed, but said "there is no concern information could be taken from it". An Israeli military spokeswoman said it was a "simple drone" without elaborating.

Hezbollah said its fighters had used "appropriate weapons" to bring down the drone on the edge of the southern Lebanese town of Ramyah.

Reporting from the Israel-Lebanon border, a correspondent for Hezbollah's al-Manar television said the drone had not sustained much damage, and had been in Lebanese airspace for around five minutes.

In a separate statement, the Israeli military said Shi'ite militias operating under the command of Iran's Quds Force, the overseas arm of Tehran's Revolutionary Guards, fired a number of rockets at Israel from Syria on Monday but they failed to hit Israeli territory.

The military said the rockets were launched from an area near Damascus.

Israel, alarmed by Iran's growing regional influence through militia allies in countries including Syria, Iraq and Lebanon, says it has carried out hundreds of strikes in Syria. It wants to stop Iran establishing a permanent military presence there and has struck against advanced weapon shipments to Hezbollah. 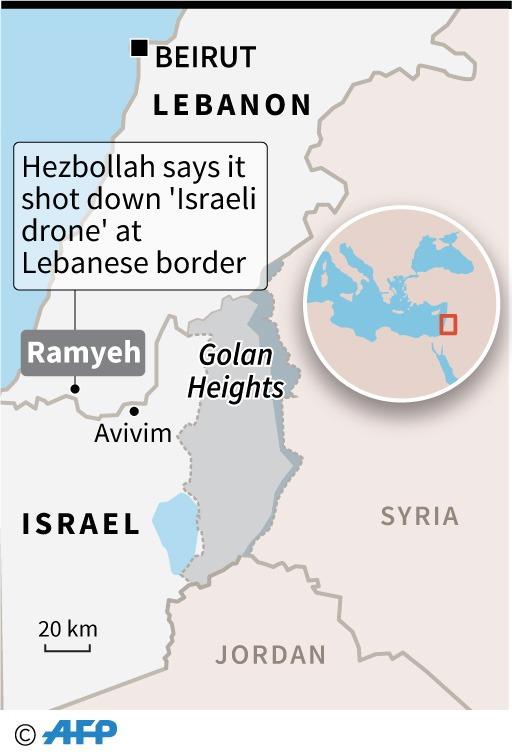 This AFP graphic shows a map showing the location of the "Israeli drone" that Hezbollah on Monday claimed it shot down.

Any new war between Israel and Hezbollah would raise the risk of a wider conflict in the Middle East, at a time when Iran is defying US attempts to force it to renegotiate a 2015 nuclear deal it reached with world powers.

Overnight, war monitor the Syrian Observatory for Human Rights said strikes by unidentified planes in eastern Syria killed pro-Iran fighters and attacked positions and arms depots belonging to them in Albu Kamal, a town near the Iraqi border.

Israel also raised the stakes last week by accusing Hezbollah with Iranian help of setting up a factory for precision-guided missiles in Lebanon's Bekaa valley.

Hezbollah has denied having production sites in Lebanon, but says it does possess precision-guided missiles.

Lebanon's government has repeatedly complained to the United Nations about Israel, which Beirut considers an enemy country, breaching its airspace.

Nasrallah said while last Sunday's border clash with Israel was over, the episode had launched a "new phase" in which the Iran-backed group no longer had red lines it would not cross.

In that brief clash, Hezbollah said it destroyed an Israeli armoured vehicle, killing and wounding those inside, and broadcast what it said was footage of two missiles hitting a moving vehicle. 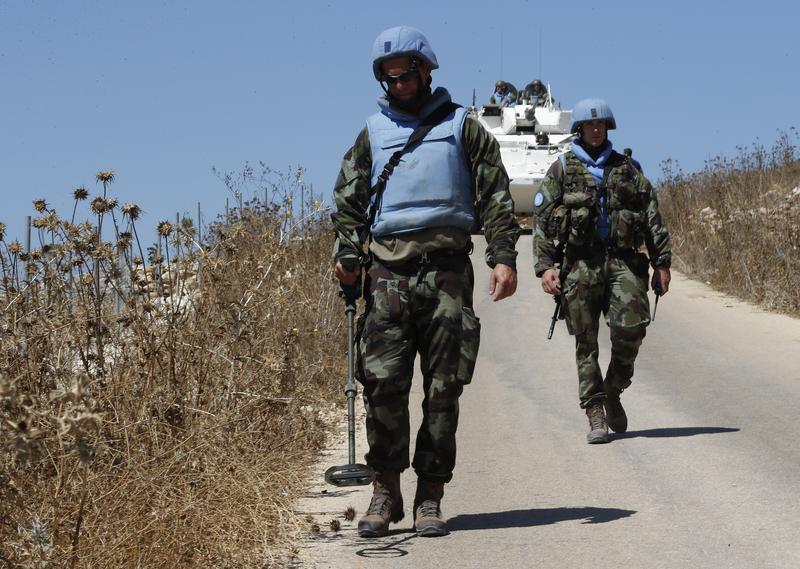 Irish UN peacekeepers use mine detectors as they patrol near the fields struck by Israeli army shells in the southern Lebanese-Israeli border village of Maroun el-Ras, Lebanon, Sept 2, 2019. (HUSSEIN MALLA / AP)

Israel said it had faked soldier casualties to dampen any inclination of Hezbollah to escalate hostilities.

READ MORE: Lebanon's Hezbollah warns against war with US, Israel

Last week's incidents came after after Hezbollah, which has backed President Bashar al-Assad in Syria's war, said two of its men were killed in an Israeli strike in Syria late last month.

Israel said its attack in Syria thwarted an Iran-led drone strike against it.

A Reuters witness at the Lebanese border near where the drone fell said the area was calm on Monday morning.