Spain on edge after 2 days of violent protests in Catalonia 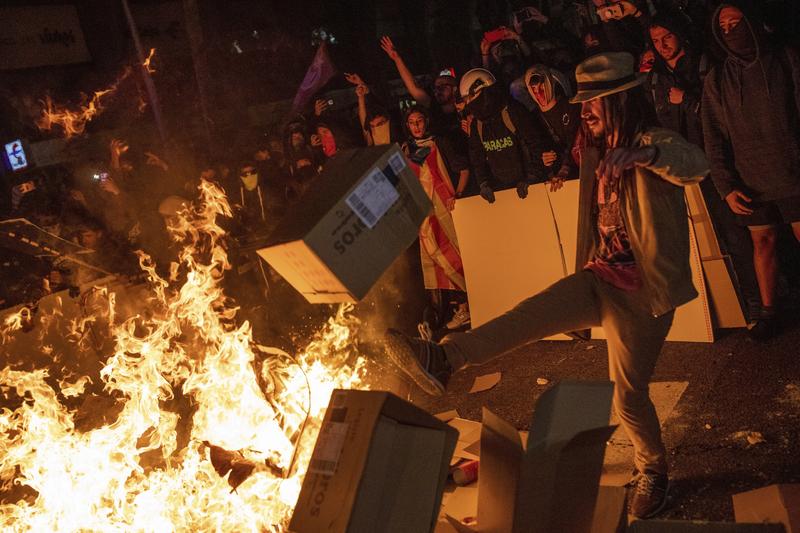 Protesters throw cartons to a burning barricade during clashes with police in Barcelona, Spain, Oct 15, 2019. Spain's Supreme Court on Monday convicted 12 former Catalan politicians and activists for their roles in a secession bid in 2017, a ruling that immediately inflamed independence supporters in the wealthy northeastern region. (BERNAT ARMANGUE / AP)

BARCELONA — Spain is on edge after two straight days of violent clashes in northeastern Catalonia between police and protesters who were angered by the Supreme Court's sentencing of nine separatist Catalan leaders to prison.

Students in the restive region went on strike Wednesday and protest marches involving several thousand people set off from several Catalan towns with the goal of reaching Barcelona by Friday. Organizers urged them to remain peaceful, like the majority of separatist rallies have been before this week.

Still, the marches down highways snarled traffic across the wealthy region.

Service on high-speed train line between Barcelona and Girona, near the French border, was halted due to "sabotage," the Spanish government said.

Traffic in downtown Barcelona was slowed by the massive cleanup effort to remove the debris of burned barricades and trash containers ignited by thousands of protesters who clashed with police in riot gear on Tuesday night.

Peaceful protests in the evening turned ugly in Barcelona and other towns. Barcelona's police said 40,000 protesters packed the streets near the office of Spain's government representative and a running melee broke out when they turned over metal barriers and threw objects at police.

The outnumbered police used foam bullets, batons and shields to battle groups that rained down rocks, firecrackers and other objects on them.

Police made 29 arrests in Barcelona, the Catalan capital. Protesters set over 150 barricades in the streets ablaze, according to the ministry.

Similar protests turned toward violence in other towns in Catalonia, which has seen a rise in separatist sentiment for the past decade. Roughly half of the region's 7.5 residents support independence, with the other half opposing a breakaway, according to polls.

Spain's acting Prime Minister Pedro Sánchez, who is facing a national election on Nov 10, said he is planning to meet with the leaders of the main opposition parties on Wednesday to discuss the situation in Catalonia.

"(I want to issue) my firmest and complete condemnation of the violence that is trying to shatter the social harmony in Catalonia," Sánchez wrote on Twitter. "All support for the forces of security."

Gabriel Rufián, a leading Catalan separatist and member of Spain's Parliament, and some other high-profile secessionists called for calm.

But Catalonia's regional president Quim Torra, a fervent separatist who has encouraged protesters to engage in civil disobedience, has yet to specifically denounce the street violence.

"All our respect for those who peacefully protest, but not for those who interrupt transit or carried out the violent attacks of yesterday," said Spanish government spokeswoman Isabel Celaá. "I urge president Torra to condemn the episode we saw yesterday." 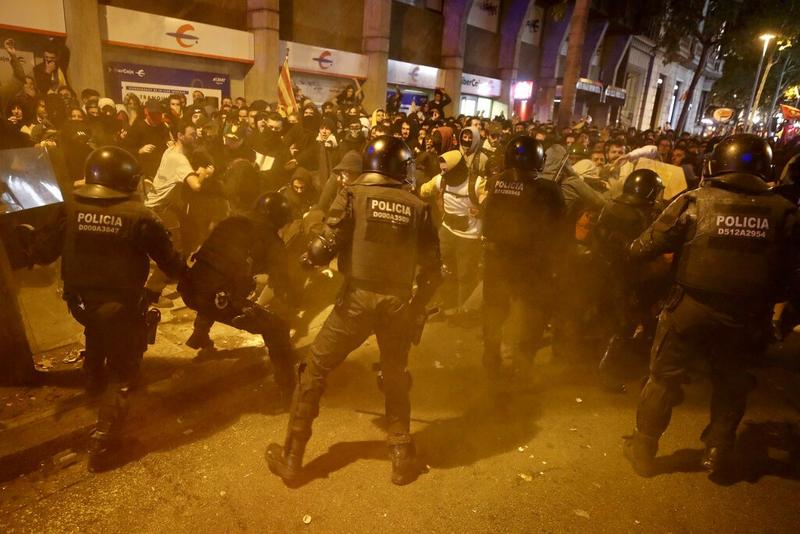 Policemen in riot gear charge against protestors outside the Spanish Government Office in Barcelona, Spain, Oct 15, 2019. Spain's Supreme Court on Monday convicted 12 former Catalan politicians and activists for their roles in a secession bid in 2017, a ruling that immediately inflamed independence supporters in the wealthy northeastern region. (EMILIO MORENATTI / AP)

The protests were ignited by the verdict released Monday by the Supreme Court, which convicted a dozen leaders of a failed 2017 secession attempt by Catalonia's regional government.

Nine of the 12 Catalan politicians and activists were found guilty of sedition and given prison sentences of nine to 13 years. Four of them were additionally convicted of misuse of public funds. The other three were fined for disobedience.

The verdict sparked protests on Monday, which ended with thousands of protesters attempting to shut down Barcelona Airport. Several flights were cancelled and transportation to the airport was halted for several hours as police skirmished with rioters outside the main terminal.