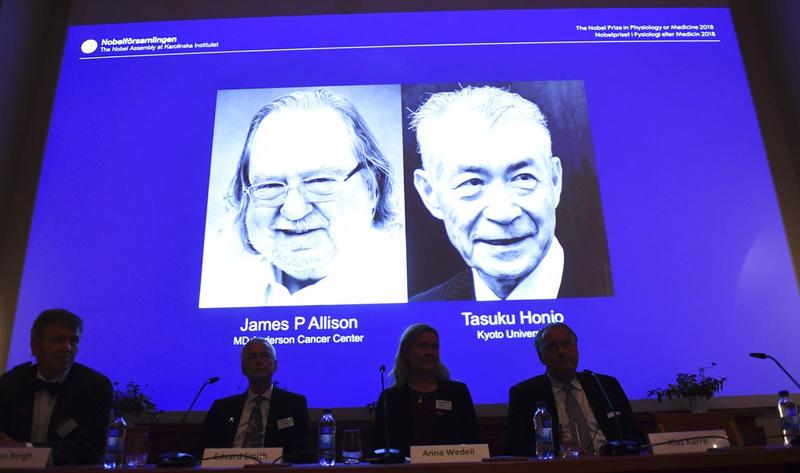 The screen in the background shows the two Nobel prize laureate in medicine or physiology 2018, James P Allison, left, and Tasuku Honjo, during the presentation at the Karolinska Institute in Stockholm, Sweden, Oct 1, 2018. The citation for this year's Nobel Prize in Medicine says the two honorees developed therapies for treating cancer. (FREDRIK SANDBERG / TT / AP)

Two researchers from the US and Japan won the Nobel Prize in medicine on Monday for discoveries that have revolutionized cancer care, turning the body's immune system loose to fight tumors in an approach credited with saving an untold number of lives.

Their work, conducted separately during the 1990s, led to the development of drugs known as "checkpoint inhibitors. The drugs marked an entirely new way to treat tumors, a kind of immunotherapy that uses the patient's own body to kill cancer cells

James Allison of the University of Texas M.D. Anderson Cancer Center and Tasuku Honjo of Kyoto University learned how cancer can put the brakes on the immune system — and how to release those brakes.

Their work, conducted separately during the 1990s, led to the development of drugs known as "checkpoint inhibitors," first used to treat the deadly skin cancer melanoma but now used for a growing list of advanced-stage tumors, including those of the lungs, head and neck, bladder, kidney, colon and liver.

The drugs marked an entirely new way to treat tumors, a kind of immunotherapy that uses the patient's own body to kill cancer cells. Up until then, the standard arsenal consisted of surgery to remove the tumor and radiation and chemotherapy to poison the cancer.

The research was "a landmark in our fight against cancer," the Nobel Assembly of Sweden's Karolinska Institute said in announcing the award. The two scientists will share the 9-million-kronor (US$1.01 million) prize. 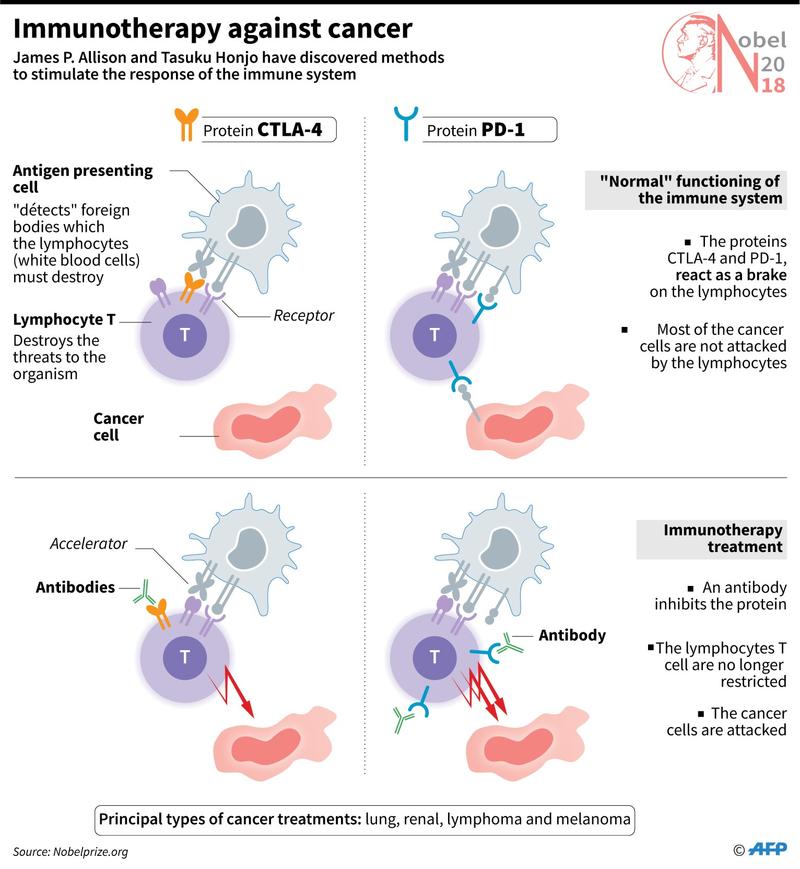 This AFP graphic presents the concept of immunotherapy, a new way to treat cancer.

"Not all patients respond to this, but for the ones that do, it has made a huge difference to their lives," Dr. Arlene Sharpe, co-chair of microbiology and immunobiology at Harvard Medical School, told The Associated Press. "There are patients over a decade ago who had an incredibly poor prognosis and now, a decade out, they are living normal lives."

Dr. Jedd Wolchok, chief of the melanoma and immunotherapeutics service at Memorial Sloan Kettering Cancer Center in New York, said: "An untold number of lives ... have been saved by the science that they pioneered."

Indeed, a drug based on Honjo's research was used to treat former President Jimmy Carter, who was diagnosed in 2015 with melanoma that had spread to his brain. A year later, he announced he no longer needed treatment.

Allison, 70, who was in New York hotel for a scientific meeting, said at a news conference that the Nobel committee evidently had trouble reaching him to break the news. But his cellphone lit up with a call from his son at 5:30 am, when the names of the winners were released.

And soon, "there were people beating on my door at 6 in the morning with Champagne," he said. 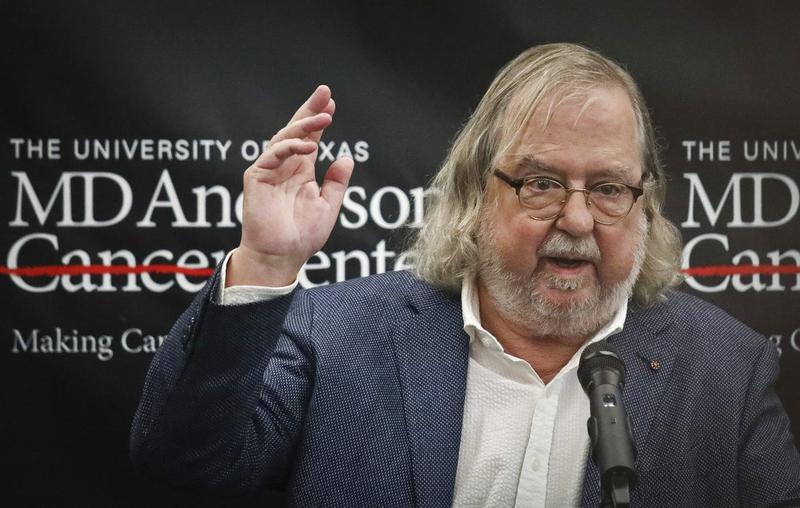 James Allison, one of the 2018 Nobel Prize winners for medicine, speaks during a press conference, Oct 1, 2018, in New York. (BEBETO MATTHEWS / AP)

At a news conference in Kyoto, Honjo, 76, told how a member of his golf club once walked up to thank him for the discovery that was used to treat his lung cancer.

"He told me, 'Thanks to you I can play golf again,'" he recalled. "That was a blissful moment. A comment like that makes me happier than any prize."

Scientists had been trying for a century to harness the immune system against cancer, but it was a struggle. Normally, key immune system soldiers called T cells seek out and attack invaders. But for poorly understood reasons, it was hard to rev them up against cancer.

In an interview Monday, Allison said he wasn't trying to cure cancer but to understand how T cells work when, at the University of California, Berkeley, he was studying a protein named CTLA-4. He learned that the protein could put the brakes on T cells, creating what's called an immune "checkpoint."

He then created an antibody that blocked the protein's action — in other words, it released the brakes so the T cells could do their job. 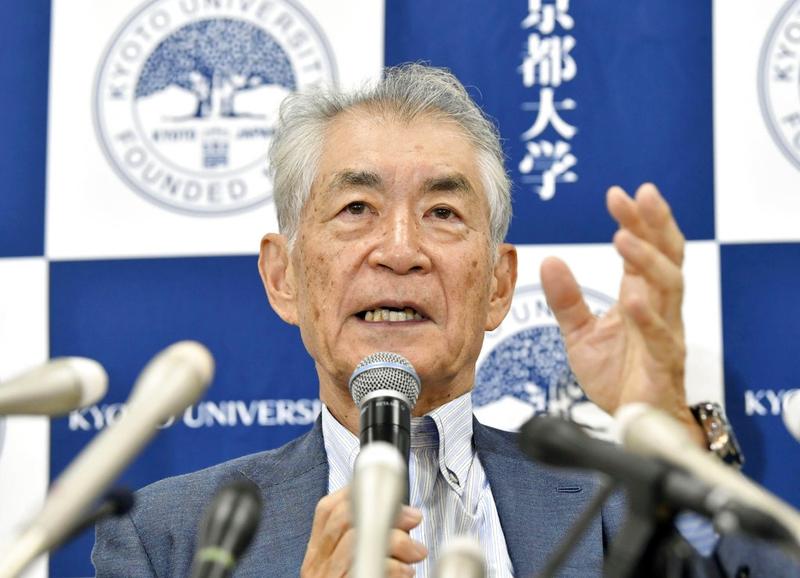 Tasuku Honjo of Kyoto University speaks during a press conference in Kyoto, western Japan, after he was awarded the Nobel Prize in medicine, Oct 1, 2018. (NOBUKI ITO / KYODO NEWS / AP)

Allison's research led to development of the drug Yervoy, approved in 2011 after studies showed it extended the survival of some patients with late-stage melanoma. A few years later, developers created drugs that release the PD-1 brake Honjo discovered — Keytruda and Opdivo, now commonly advertised on TV.

Allison said the biggest challenge with immunotherapy now is to learn why it helps some patients but not others — and how to combine it with traditional therapies to improve outcomes and reduce side effects.

"It's a great emotional privilege to meet cancer patients who've been successfully treated with immune checkpoint blockade. They are living proof of the power of basic science," he said in a statement.

His research also inspired the name of the Checkpoints, a musical group of cancer researchers for which Allison plays harmonica.

No Nobel in literature is being given this year because the Swedish Academy, the body that selects the winner, has been in turmoil after sex abuse and financial scandal allegations.