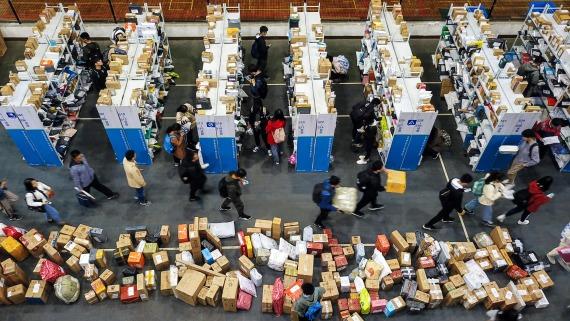 Faculty staff and students get their parcels at a make-shift collecting point in an indoor tennis court at Nanjing University of Aeronautics and Astronautics (NUAA) in Nanjing, East China's Jiangsu province, Nov 13, 2018. (LI BO / XINHUA)

BEIJING - The number of China's online shoppers hit 610 million as of December 2018, up 14.4 percent year on year, as consumer demands continue to grow and the online consumption market further matures in China, according to the latest statistical report on internet development.

Over 592 million people shopped via mobile phones, registering an increase of 17.1 percent compared with December 2017 and accounting for 72.5 percent of the total mobile phone internet population, according to the report, released by China Internet Network Information Center.

The increasing consumer demand for higher quality products and a broader selection of goods and services from sellers have injected new vitality into China's internet-based shopping sector and further drove its growth in 2018, the report notes.