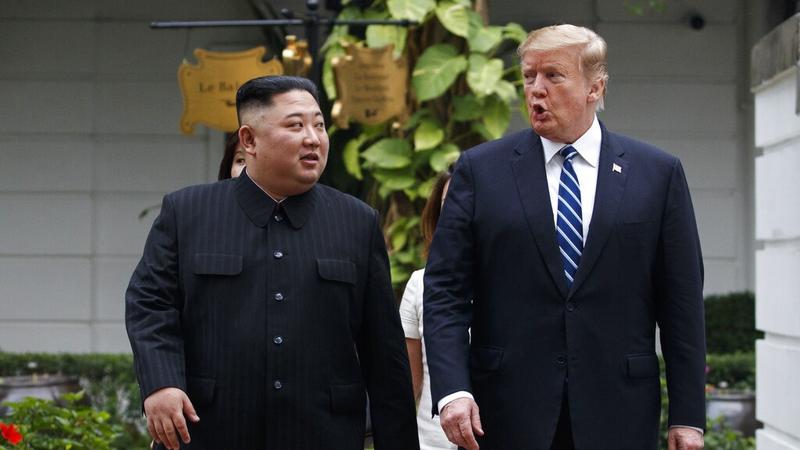 In this Feb 28, 2019 file photo, US President Donald Trump and DPRK leader Kim Jong-un take a walk after their first meeting at the Sofitel Legend Metropole Hanoi hotel, in Hanoi. (EVAN VUCCI / AP)

SEOUL – The Republic of Korea's presidential Blue House said on Wednesday that it had been aware of the letter sent by Kim Jong-un, top leader of the Democratic People's Republic of Korea (DPRK), to US President Donald Trump in advance.

Moon Chung-in, a special adviser for the ROK president on unification, security and foreign affairs, said the letter seemed to have opened up a new possibility in relations between Pyongyang and Washington

The Blue House "was aware" of the letter in advance, Yoon Do-han, senior press secretary for ROK’s President Moon Jae-in, said in a short text message to local reporters. He declined to comment further.

Trump said Tuesday that he had received a "beautiful" letter from Kim, calling the letter "very warm" and "very nice."

The US president was scheduled to visit Japan and the ROK in late June to discuss the denuclearization of the Korean Peninsula with leaders of the two countries, according to the US State Department.

The denuclearization negotiations between Pyongyang and Washington has been stalled since the second summit between Kim and Trump ended with no agreement in late February in the Vietnamese capital of Hanoi.

Moon Chung-in, a special adviser for the ROK president on unification, security and foreign affairs, said in a forum in Seoul that the letter seemed to have opened up a new possibility in relations between Pyongyang and Washington, according to local media reports.