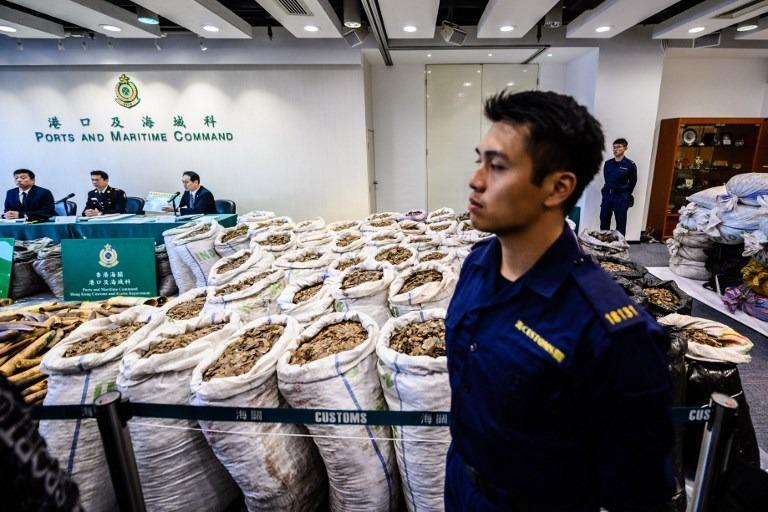 It was the largest single seizure of pangolin parts in the city.

The value of the seized goods — which equates to around 500 elephants and up to 13,000 pangolins — was over HK$62 million (US$7.9 million), officials said on Friday. Originating in Nigeria, the shipment was bound for Vietnam, they added.

In a separate incident, customs officials in the northern Vietnamese port of Hai Phong discovered another 1.4 tonnes of pangolin scales in a shipping container sent from Nigeria, the state-run Vietnam News Agency reported on Friday.

Last October, Vietnam intercepted more than more than eight metric tonnes of pangolin scales and ivory, also from Nigeria, in one of the Southeast Asian country’s largest wildlife trafficking cases for years.

The Chinese territory of Hong Kong, located on China's southern coast, is a global blackspot for wildlife trafficking.

The city is a key transit point, supplying an array of wildlife products including timber, shark's fin and rhino horn across Asia and particularly the Chinese mainland.

Yueng Ka-yan, head of command at Hong Kong's Customs and Excise Department, said the smugglers used a new method to hide the endangered species by a process of 'solidification' where they used ice bags and frozen meat to obscure the species.

"The low temperature environment created by the ice bags and frozen meat helped mask the distinctive smell of the pangolin scales."

Pangolins, also known as scaly anteaters, are critically endangered. They are coveted for their meat — considered a delicacy — and their scales, which are used in traditional Chinese medicine to treat aliments from cancer to arthritis.

"It is clearly impossible that the pangolin species can withstand such high rates of poaching, trafficking and trade. Eight tonnes is outrageous," said Alex Hofford, campaign manager for conservation group WildAid in Hong Kong.

WildAid estimates 100,000 pangolins are poached from the wild each year, with all 8 species of pangolin in Africa, and especially Asia, now under threat.

Customs officials who worked with their Chinese mainland counterparts to intercept the goods, found the species buried under frozen meat inside a refrigerated container.

Officials said two people had been arrested in connection with the case.

In a 2018 review released on Thursday, customs officials said there had been a 72 percent increase in seizures of endangered species with the total volume of goods seized increasing more than treble.

ADM Capital Foundation, which focuses on environmental challenges across Asia, wrote in a January report that wildlife trafficking should be incorporated under Hong Kong's Organised and Serious Crime Ordinance (OSCO).

Doing so would provide "a powerful disincentive to wildlife criminals, and importantly, would prevent reinvestment of profits into further criminal activities," the report reads.