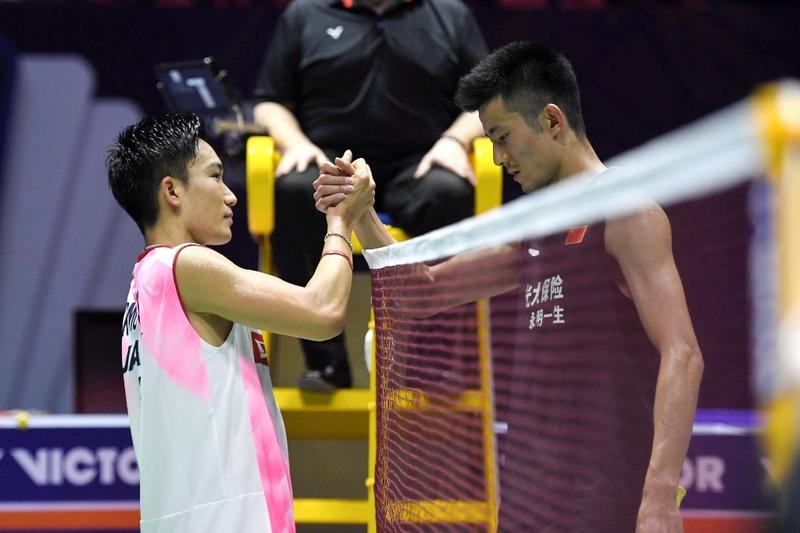 CHANGZHOU, China — World No 1 male shuttler Kento Momota of Japan and the women's singles second seed Tai Tzu Ying of Chinese Taipei powered through to the respective finals at the 2019 Badminton China Open here on Saturday.

"Of course we all hoped to win and we both played well," commented the fifth seed Chen, who won five times in their previous eight competitions.

"Chen is a very powerful player and it was an intense game," said Momota, who will face Anthony Sinisuka Ginting of Indonesia in the final, a replay of last year's final where Ginting finally won the gold medal.

"I will try my best to perform well," said Momota when asked about the final.

In the women's singles, Tai had a 12-1 horrible head-to-head record to China's Chen Yufei before Saturday's match. However, it looked like Chen could crash Tai easily after lifting the first set 21-6.

"Today's wind above the court is stronger than the last two matches," Tai complained after the match. "I had to take a lot of effort to control the shuttlecocks, which made me on the difficult side."

After changing sides, Tai recovered to take the second set 21-13, forcing a third set, where Chen saw the match point first on 20-19, but Tai stayed calm and fought back for consecutive points to win.

Top seed Zheng Siwei/Huang Yaqiong from China and their second-seeded teammates Wang Yilyu/Huang Dongping crushed their rivals respectively and will meet in the mixed doubles final.

Fellow Chinese Chen Qingchen/Jia Yifan beat Chang Ye-na/Kim Hye-rin of South Korea 21-13, 23-25, 21-16 in the women's doubles semifinals and their opponents on Sunday will be the second seeds Misaki Matsutomo/Ayaka Takahashi, who knocked out another Japanese duo Yuki Fukushima/Sayaka Hirota 21-17, 15-21, 21-16.