By Zhang Yangfei and Palden Nyima 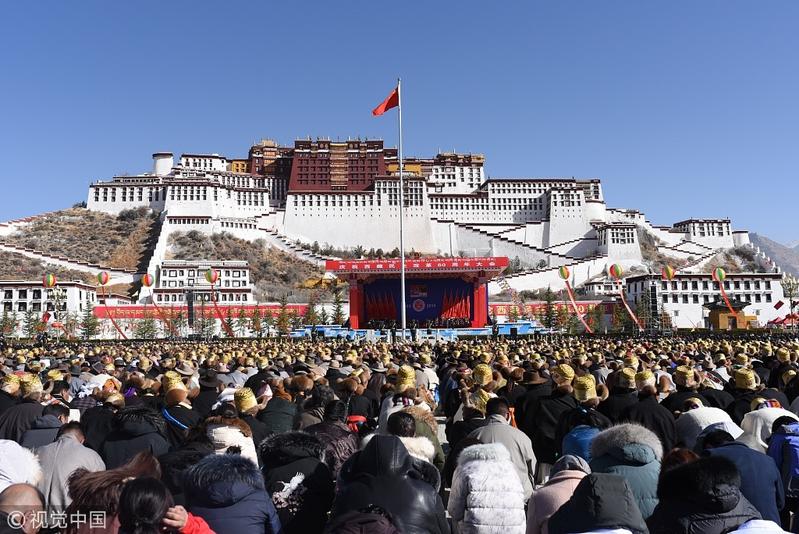 A ceremony celebrating the 60th anniversary of the campaign of democratic reform in Tibet is held in Lhasa on March 28, 2019. (PHOTO / VCG / CHINADAILY.COM.CN)

Thousands of people gathered on Thursday in front of Lhasa's landmark Potala Palace in the Tibet autonomous region to celebrate the 60th anniversary of democratic reforms.

"The democratic reform was the widest, deepest and greatest movement that has ever happened in Tibet's history."

"The democratic reform was the widest, deepest and greatest movement that has ever happened in Tibet's history. It was a significant historical event in the development of the region's society and the progress of human rights, setting the course of Tibet's people on the broad road of socialism," Wu Yingjie, the region's Party secretary, said during the ceremony.

March 28 was designated as the day in 1959 when millions of Tibetans, more than 90 percent of the population, were freed from feudal serfdom.

Having lived under monastic slavery and brutal torture by landowners, including punishments such as gouging out eyes and severing hamstrings, the old serfs began to take ownership of farms, enjoy human rights and participate in the management of regional and national affairs after the emancipation, which has greatly stimulated people's enthusiasm in production and brought significant changes to Tibet 60 years on.

Last year, 93.9 percent of students in compulsory education successfully graduated, and the illiteracy rate among young and middle-aged adults dropped to 0.52 percent, he said.

Tibet is the first among provinces, municipalities and autonomous regions in China to offer 15 years of free education, including meals and accommodations for students from poor families. In the old times, education was a privilege exclusive to the nobles.

The region is now connected by rail and air networks, with expanding expressways winding through mountains, and the old rugged, muddy roads in pastoral areas have been paved.

"For the past 60 years, we have adhered to a people-centered ideology, made it our goal to help people achieve better lives and insisted on being together with people of all ethnic groups," Wu said.

"We have also continuously enhanced public security and development of the legal system, resolutely battled separatism and invasive activities and effectively safeguarded national security and social stability," he said.

Religion has been guided to adapt to socialist society, with freedom of religion and normal religious activities well protected under the law, he added.

To push reform forward, Wu said, Tibet will continue to crack down on separatism and invasive activities, strengthen the management of religious affairs and commit itself to eliminating extreme poverty, improving employment and achieving comprehensive development in education, healthcare, science, technology, culture and ecosystem protection.

The ceremony attracted thousands of members of the public to the square in front of the Potala Palace early in the morning. People waved national flags and bundles of flowers.

Phurbu Dondrup, a 12-year-old primary student, said he got up at 5 am and was excited to witness the grand event.

"I am very happy today to be here and see the national flag rising up to the blue sky in front of the Potala Palace. It is very beautiful," he said.

During the ceremony, a representative of the former serfs, Lobsang Phuntsok, made remarks and shared his old life with the public. He thanked the Communist Party of China and the central government for issuing preferential policies and bringing prosperity to the people of his village.

Representatives from local military units, officials and schools also shared their feelings about the reform.

Pasang Dekyi, a teacher, said she was touched by the speeches. Because she grew up in a family that raised yaks, she said, she felt very connected to the great changes described by the representatives.

"I am very proud to see my hometown full of vigor and heading toward a brighter future," she said.