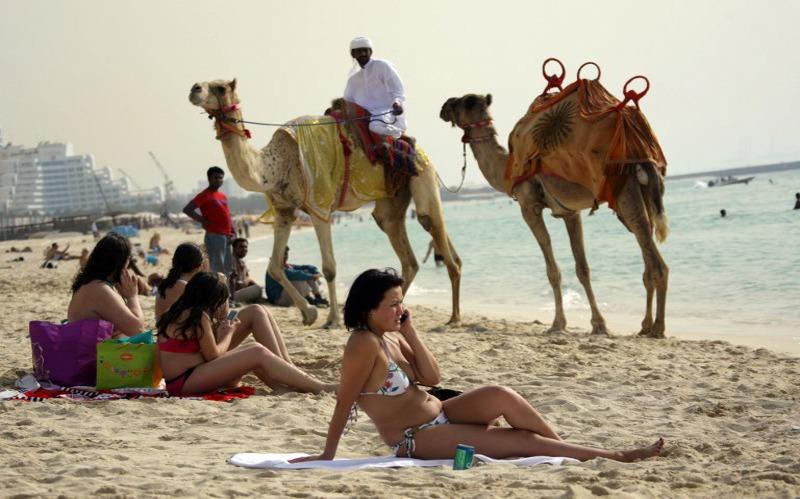 An Emirati man riding a camel passes by foreigners sunbathing on a beach in the Gulf emirate of Dubai on April 16, 2009. The United Arab Emirates will allow foreigners to obtain extended residency visas after they retire, a major policy shift designed to give expatriates a bigger stake in the economy and foster longer-term growth.(KARIM SAHIB / AFP)

The United Arab Emirates will allow foreigners to obtain extended residency visas after they retire, a major policy shift designed to give expatriates a bigger stake in the economy and foster longer-term growth.

The recent measures “show a growing realization among policymakers of the need to make structural changes that gives expats a bigger buy-in to the economy.”

Foreign residents from around the globe make up more than 80 percent of the UAE’s population and have for decades been a mainstay of its economy, working, buying homes and splashing their cash at luxury malls and eateries. But they were only welcome as long as they could work, creating an underlying sense of transiency even among expatriates who have spent most of their lives in Dubai, Abu Dhabi or elsewhere in the oil-exporting federation.

The new law, which comes into effect in 2019, will allow foreign retirees over the age of 55 to apply for longer residency visas which can be renewed after five years, the state-run WAM news agency reported. To qualify, the retiree must either have a property investment worth at least 2 million dirhams (US$544,500), savings of no less than 1 million dirhams or a monthly income of no less than 20,000 dirhams.

Expatriates in the UAE are currently expected to retire at 60 with an option to work until 65 with special approval from the authorities.

The move caps a series of measures designed to boost long-term growth in a country that has struggled to translate rising oil prices into a recovery in demand for the luxury properties under construction from the beach to the desert or for the UAE’s many retail offerings.

Allowing retirees to stay “is essentially about maintaining capital by having people keep their savings in the UAE,” Bilal Khan, a senior economist at Standard Chartered Plc said. The recent measures “show a growing realization among policymakers of the need to make structural changes that gives expats a bigger buy-in to the economy.”

In June, the UAE announced plans to ease restrictions on full foreign ownership of businesses and scrapped billions of dollars in fees that private-sector companies must pay to hire foreign workers. Visa rules were also loosened for job seekers, tourists and students to encourage more people to come, stay longer and spend more.

The changes mark a radical departure for a member of the six-nation Gulf Cooperation Council, where large expatriate populations make typically tax-free or low-tax earnings but are excluded from the benefits enjoyed by nationals, who tend to be employed in the public sector with generous pay.

Earlier this month, Qatar made permanent residency an option for a limited number of foreigners -- a step that would grant them access to the welfare system and commercial rights previously reserved for citizens of the gas-rich nation.

The reforms follow years of austerity after the collapse in oil prices in 2014 strained government revenues and weakened growth across the Gulf. Last year, economic growth in the UAE slumped to an inflation-adjusted 0.5 percent after OPEC nations agreed to production cuts, down from 3 percent in 2016.

On Sunday, the UAE also decided to cut electricity fees for industries starting in the fourth quarter, according to state news agency WAM. Electricity consumption costs for large factories will be slashed by 29 percent, while the small and medium factories will have fees reduced fees by 10 percent to 22 percent. Service connection fees for new factories will be waived.

“Improving the competitiveness of our country is a journey that has no finish line,” WAM quoted Sheikh Mohammed bin Rashid Al Maktoum, the UAE vice president and prime minister and ruler of Dubai, as saying.