Typhoon puts scientists and residents to the test

By Ma Zhenhuan in Hangzhou, Xing Yi and Wang Ying in Shanghai and Cang Wei in Nanjing 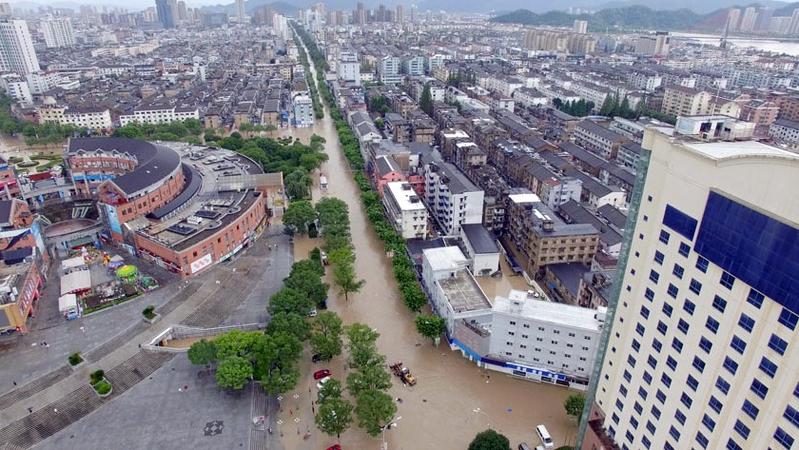 At 2 pm on Sunday, nearly all the residents and business owners on a street in Linhai, Zhejiang province, were busy with the same task.

They were cleaning up their homes and shops on Ziyang Old Street after a frightening night of heavy winds, rain and flooding caused by Typhoon Lekima.

Some people pulled their wooden beds, complete with sodden mattresses, into the street to dry in the afternoon sun, while others were busy tending to their walls or wooden floors.

The owner of a noodle shop on the street said, "We made some preparations before the typhoon made landfall, such as moving the refrigerator and other electrical appliances to higher places, but we never expected the amount of rainfall it brought."

These ancient walls were designed to resist ordinary (once-in-a-decade) floods. Linhai has not encountered such severe flooding in the past 50 years or so

Linhai is about a four-hour drive from Shanghai, and Ziyang Old Street has long been known for its cobblestone sidewalks that wind their way past two-story buildings from the Ming Dynasty (1368-1644) and Qing Dynasty (1644-1911) and homes decorated with stone carvings and gray tiles.

The street is a must-visit attraction for tourists to the old part of Linhai, which sits near the Lingjiang River.

On Saturday night, residents battled floods that breached the 1,500-year-old city wall and rose to a height of 1.5 meters.

The flooding was so severe that police and rescue authorities issued an online emergency appeal for boats to be used to evacuate those affected.

Lekima, the strongest typhoon to hit the Chinese mainland so far this year, wrought havoc in the old area of Linhai, killing four people and leaving three missing.

Yang Li, who lives in the old area, said she had stocked up on batteries to charge her mobile phone, along with food and water. As the floodwater gradually rose and flowed down the street on Saturday morning, she stayed in her second-floor room. 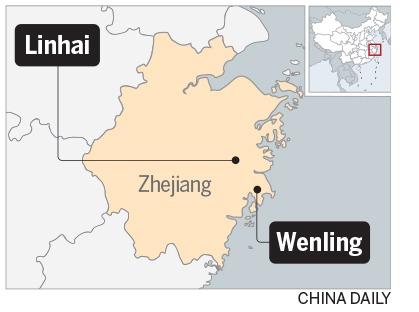 "The water flooded in at about 4 or 5 pm, rising above the stairway on the second floor, where we were stranded," Yang told Beijing News.

She and her neighbor were evacuated on Sunday morning by firefighters using boats.

By noon on Sunday, the flooding in Linhai had gradually receded, with the water level dropping by 30 to 50 centimeters from its peak.

"Linhai has long been prone to flooding, especially during the rainy season," Wang Dan, the city's mayor, told the media on Sunday.

Wang said that at 3 pm on Saturday, the Lingjiang River outside the city wall was rising rapidly, reaching as high as 10 meters and greatly exceeding the capacity of the wall's sluice gate.

Today, tourists flock to Linhai to explore the wall and the well-preserved ancient area it was built to protect. For more than 1,000 years, the wall offered protection against raiders.

It's no coincidence that the wall, which runs alongside the Lingjiang River, looks like the Great Wall in Beijing.

Ming Dynasty general Qi Jiguang heightened and widened the Jiangnan (South of the Yangtze River) Great Wall and had the idea to build two-story towers. He later did the same at the Great Wall in northern China, including at Badaling and Mutianyu in Beijing. Qi was sent to Beijing after being promoted.

Wang said: "These ancient walls were designed to resist ordinary (once-in-a-decade) floods. Linhai has not encountered such severe flooding in the past 50 years or so."

She added that it was "extremely rare" that the flooding at the weekend had breached the Wangjiangmen Gate on the ancient wall, inundating the old area of the city.

Rescue workers attempted to better protect the wall and keep the flooding at bay.

By 10 pm on Sunday, the flooding had gradually subsided, with the level of the Lingjiang River dropping to 4.4 meters.

Han Shengfang, who has run a small shop on Ziyang Old Street for seven years, told Zhejiang Daily: "It may still take three days before I can reopen my shop, but it doesn't matter. In the end, we will have endured and conquered a great storm." 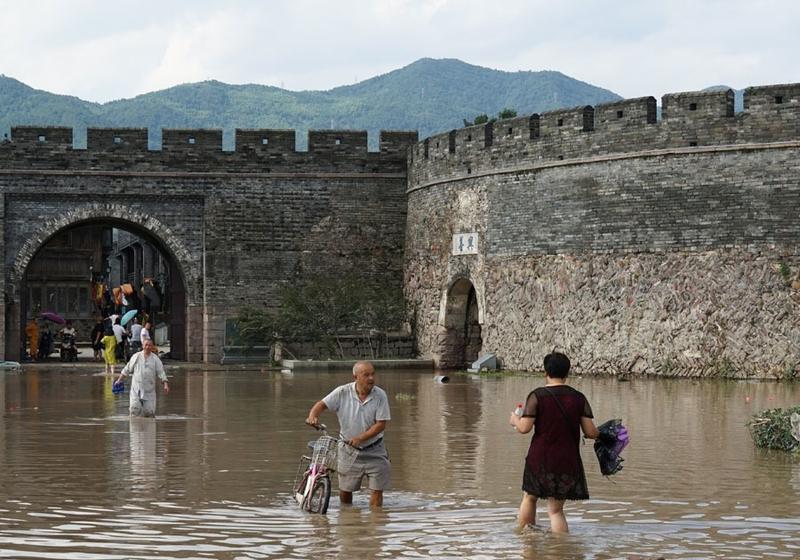 Residents wade through floodwater in front of the city wall in Linhai. (WENG XINYANG / XINHUA)

On Thursday evening, as people were evacuated from coastal areas with Lekima approaching Zhejiang, a team of scientists swung into action.

Using a range of observation devices in a special truck, 12 scientists from the Shanghai Typhoon Institute arrived at Zhujiajian Island in the Zhoushan Archipelago.

The team released balloons carrying apparatus to collect accurate data from the typhoon, such as temperature, humidity, pressure and wind speed.

From Thursday to Sunday, the scientists launched more than 10 balloons, including four with sensors to detect ozone.

It was the first time Chinese scientists had used balloons during a typhoon to study how ozone moves when affected by strong convection currents.

Tang Jie, deputy director of the institute, said in an interview with Beijing News that this work will help to assess the environmental impact of the typhoon in terms of ozone pollution, as ozone has a negative influence on human health and activity.

Tang's team began to observe typhoons outdoors in 2007, and each year it carries out four to five such missions.

Radar and satellites can also be used for observation through remote sensing, but data collected by balloon is direct and more accurate, which will help scientists be more precise with their forecasts, Tang said.

As Lekima approached Shanghai on Friday evening, a huge damper inside the Shanghai Tower, the country's highest building, started moving to reduce the vibration caused by the strong winds.

The Shanghai Tower is the first skyscraper in the world to use the eddy current damping system, which was designed and made by a Chinese company.

Mounted on the 125th floor of the 632-meter-high building, the 1,000-metric-ton device is suspended from 12 steel cables and works like an automatic clock pendulum, with a sway range of 2 meters in all directions.

It helps increase structural stability, while the building's exterior spiral curve can also reduce the wind load by 24 percent. 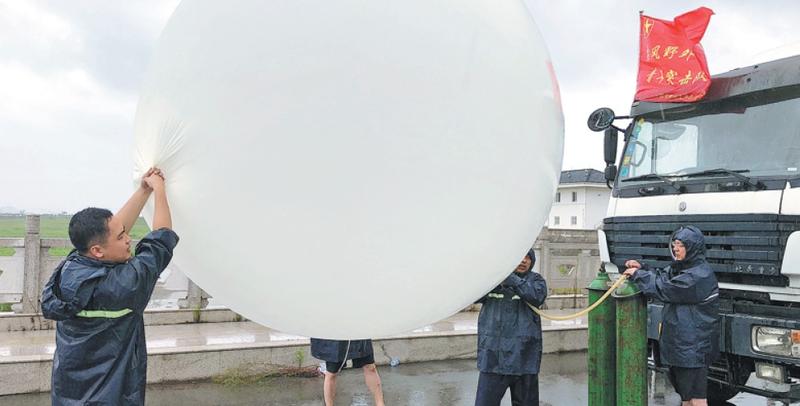 As the typhoon brought torrential rain and winds to southeastern areas early on Saturday, Shanghai proved the value of its ongoing "sponge city" project, which is designed to absorb excess rainwater and drain heavy precipitation.

Some 43 overpasses in the Songjiang, Qingpu, Putuo, Pudong, Minhang and Jiading districts of the city were closed, according to the Shanghai Transportation Commission. The most severe accumulation of rainwater was 155 centimeters.

But the initiative, which aims to make rainwater work for the city, helped Shanghai tackle the typhoon more easily. Promoted by the State Council in October 2015, it requires candidate cities to be capable of absorbing or reusing at least 20 percent of rainwater by next year.

A blogger with the user name seanpan, who posted video footage of a flooded road on Sina Weibo, said: "The road in front of my home was under the floodwater, but when we returned home after having some dumplings, the water, as if by magic, had gone. It seems that Shanghai's drainage system is pretty good."

At about 5 pm on Saturday, a similar occurrence was reported by the website of local media outlet Eastday at the junction of Lingling Road and North Shuangfeng Road in the Xuhui district. An hour earlier, people had to wade across the streets, with water reaching their ankles. But by 5 pm, the junction had returned to normal.

Shanghai is fast becoming a sponge city, which includes constructing sustainable drainage systems, promoting the development of green buildings and replacing concrete surfaces with those that absorb water.

Liu Qianwei, a chief engineer with the Shanghai Municipal Housing and Urban and Rural Construction Management Commission, said, "Our target is to have 20 percent of the existing urban area, or 200 square kilometers, reach the standard of a sponge city, and for this proportion to rise to 80 percent by 2040."

In Lingang, Pudong New Area, an area of 79 sq km is now covered by the sponge city project.

Through a multidimensional water collection and storage system, water is saved and purified on rainy days to be used as needed. 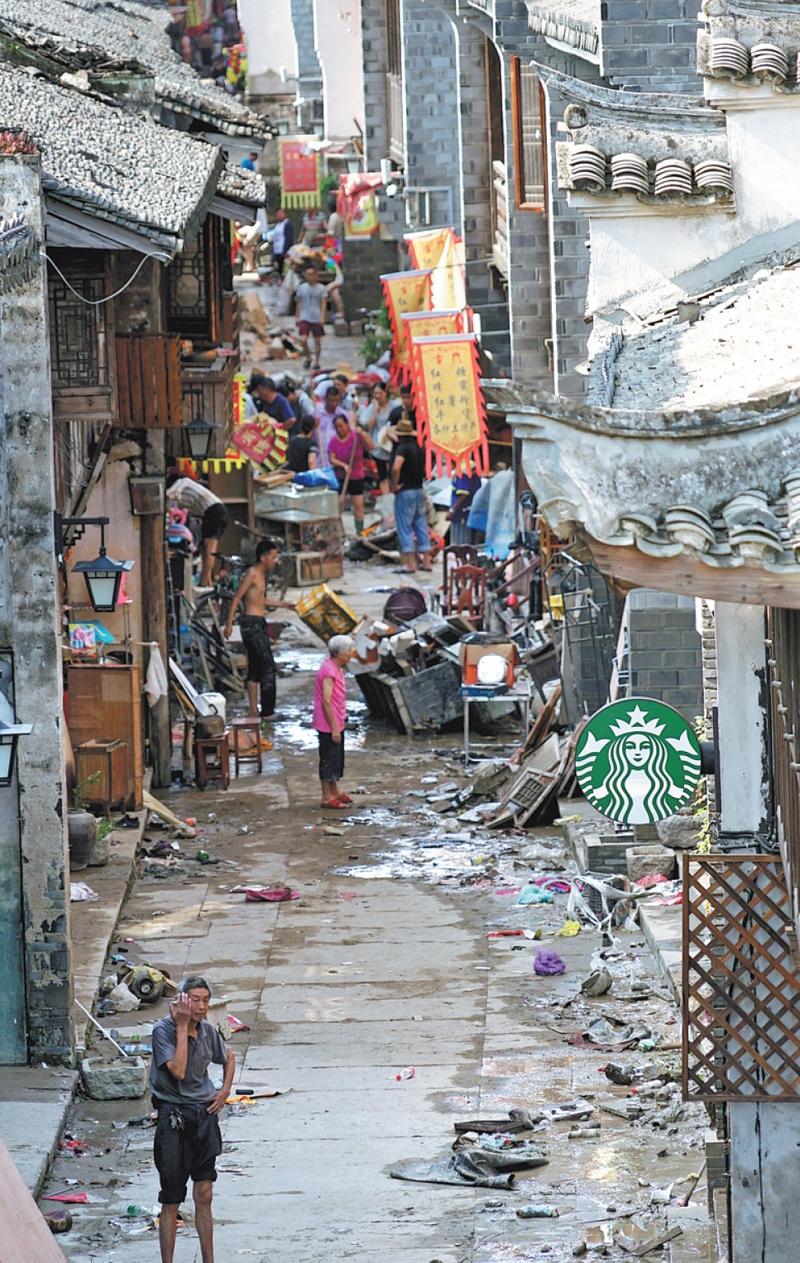 Residents of Ziyang Old Street in Linhai clear up after the typhoon. (WENG XINYANG / XINHUA)

In Jiangsu province, Lekima brought torrential rains and heavy winds to 576 villages and townships. Many of the 13 cities in the province experienced flooded roads and sidewalks, and fallen trees, with roofs blown off homes.

On Sunday, a video clip of firefighter Ji Houniupei eating a steamed bun after working for hours went viral on social media.

Ji was sitting by the side of a road, covered in mud. With a bun in his mouth, he said he had eaten 11 so far. "Delicious!" was his verdict.

By Monday, the clip had been viewed more than 100 million times and had received millions of likes from netizens.

Ji later ate another bun, taking his total to 12.

He slept for only about three hours in two days after the typhoon made landfall in Taicang, Jiangsu, on Saturday. Ji started emergency rescue work at 3 pm on Saturday and did not return to his dormitory until 4 am. From 8am, he worked for more than 10 hours in heavy rain and winds.

"We were given 10 emergency tasks on the first day, mostly draining places that were flooded," Ji said.

"In one underground garage, the water was more than 1 meter deep and it continued to flood in. All the firefighters were starving at around 8 pm, and I grabbed the steamed buns the moment I saw them being delivered by colleagues.

"I was shocked when I saw the video, because I don't usually eat that much. I hope that my parents haven't watched the clip, as I don't want them to worry about me." 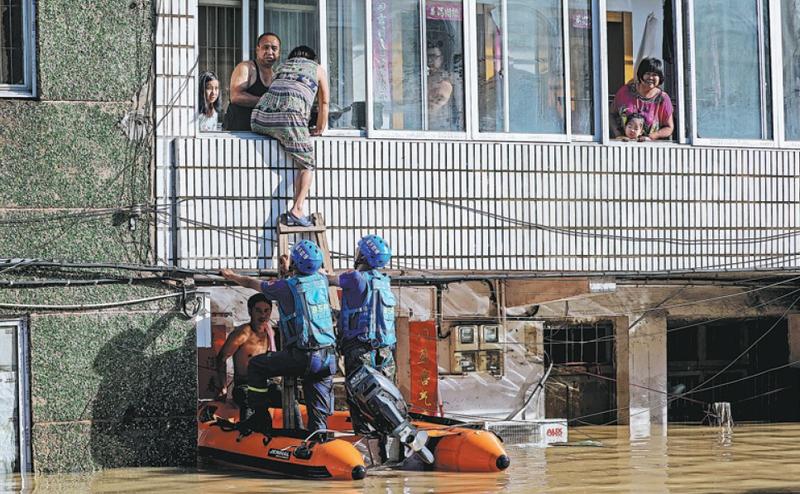 By Sunday morning, many firefighters such as Ji, together with hundreds of civil servants and police officers, had evacuated 143,000 people in the province and safely brought 19,800 vessels to harbor.

Many elderly people initially refused to be evacuated and insisted on staying at home in areas affected by the typhoon. Community workers eventually persuaded them to leave.

He Liuzhen finally agreed to leave her dilapidated home in Suzhou and go to a hotel until the typhoon passed.

The 94-year-old lives alone in the Niujiaxiang community in the city's Gusu district in a house that dates to the Qing Dynasty. She had initially ignored her children's appeals to leave and insisted on staying home.

Zhang Yingying, Party chief of the community, said: "She said she would rather die in the house ... She sat throughout the night to keep an eye on the leaky roof during the torrential rain.

"You first need to know what worries the elderly before you can persuade them to leave. I told her that she would only be moved temporarily and could return whenever she wanted. We arranged a free hotel, hot noodles and social workers to accompany her after she finally agreed to go."

Zhang and her colleagues also visited another 50 elderly people living alone and accompanied them to the hotel.