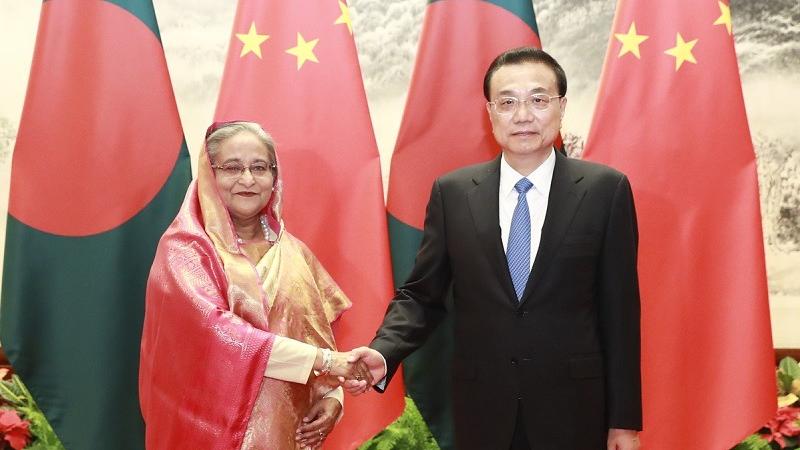 Premier Li Keqiang holds talks with Bangladeshi Prime Minister Sheikh Hasina, who is paying an official visit to China, at the Great Hall of the People in Beijing, capital of China, July 4, 2019. (PHOTO / XINHUA)

China and Bangladesh signed a number of agreements on Thursday focusing mainly on power generation and economic cooperation as part of efforts to boost bilateral ties.

Premier Li Keqiang and visiting Bangladeshi Prime Minister Sheikh Hasina witnessed the signing of the agreements at the Great Hall of the People in Beijing.

Li encouraged alignment of the development strategies of Bangladesh with the Belt and Road Initiative, consultations between the two countries on the joint feasibility study of a free trade agreement and jointly promoting the building of the Bangladesh-China-India-Myanmar Economic Corridor for common development.

He also underlined the need for the two nations to intensify communication and coordination in international affairs in order to play a positive role in promoting regional peace, stability and development.

Against the backdrop of the ongoing global economic slowdown, such growth in trade between two countries is rarely seen, Li said. "This demonstrates that the potential for bilateral cooperation remains huge," he added.

The Bangladeshi prime minister hailed the Bangladesh-China relationship as an example of high-level development and said Bangladesh is willing to actively participate in the BRI, work with China to strengthen regional connectivity and enhance teamwork in trade, investment, services and infrastructure.

Both countries are committed to peace, stability, mutual benefit and win-win outlooks as well as resolving disputes through peaceful means, Hasina added.

The two nations also agreed to set up a work group responsible for investment cooperation to press ahead with a bilateral investment pact, Wu Jianghao, director-general of the Foreign Ministry's Department of Asian Affairs, said after the two leaders' meeting.

He said China has become Bangladesh's biggest sources of foreign direct investment, and vast potential remains there in investment cooperation in such fields as infrastructure construction and production capacity.

China supports Bangladesh and Myanmar in resolving the issue of Rohingya refugees through consultations in order to realize the early repatriation of displaced people from Bangladesh to Myanmar, he added.