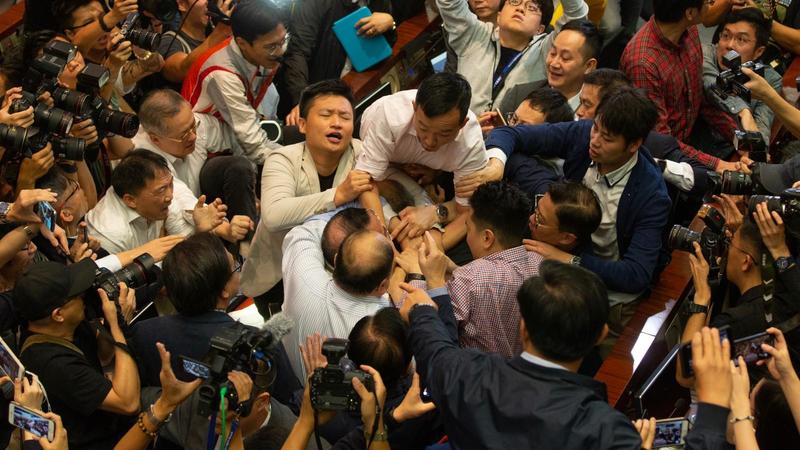 A meeting at Hong Kong’s Legislative Council descends into chaos on May 11, 2019. (ROY LIU / CHINA DAILY)

The arrests were made on Friday and Saturday after the police carefully investigated reports of obstruction at a meeting in the Legislative Council complex on May 11, according to the Hong Kong police.

They will appear in court on Monday for the violation of Legislative Council (Powers and Privileges) Ordinance.

According to a post on the Facebook page of lawmaker Chu, he said he was arrested late Friday night near his home on a charge of violating Article 19 of LegCo’s Powers and Privileges Ordinance on May 11, when opposition lawmakers tried to obstruct a meeting of the bills committee vetting the extradition law amendment bill. The bill has since been withdrawn.

According to Eddie Chu’s Facebook post, he was arrested on a charge of violating Article 19 of LegCo’s Powers and Privileges Ordinance on May 11, when opposition lawmakers tried to obstruct a meeting of the bills committee vetting the extradition law amendment bill

The article stipulates that any person who assaults, interferes with, molests, resists or obstructs any officer of LegCo who is executing his or her duty is liable to a fine of HK$10,000 ($1,280) and imprisonment for up to 12 months.

READ MORE: James To ‘not rightful’ chairman of bills committee

Chaos broke out that day after both the pro-establishment and opposition camps claimed to be the legitimate host of the bills committee.

The decision made the meeting hosted by the pro-establishment camp the only legitimate one.

Opposition lawmakers then tried to stop their rivals from entering the meeting room with violent acts. Even after entering, Shek could not sit on the chairman’s podium and returned to his seat. Several opposition lawmakers, including Chu, allegedly started a scuffle by climbing onto seats and attempting to grab Shek’s microphone, during which several were injured.