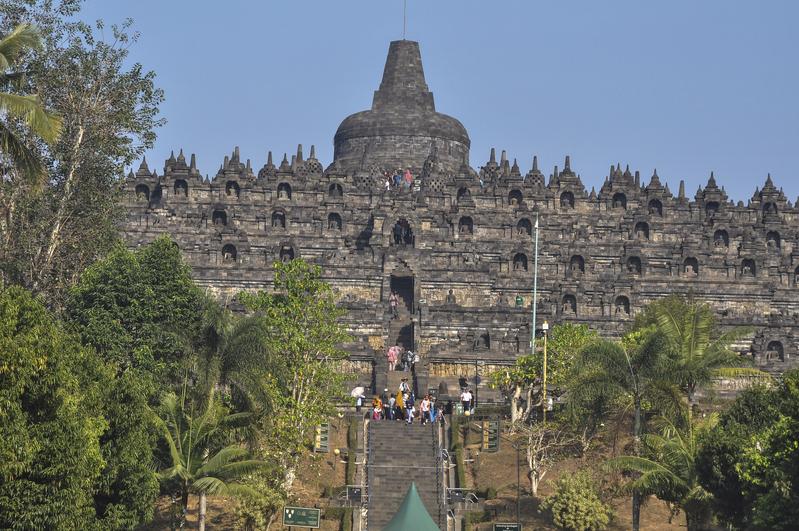 YOGYAKARTA — Hundreds of tourists, many of them young Westerners, sat on gray stone steps atop the world's largest Buddhist temple, occasionally checking cellphones or whispering to each other as they waited for daylight.

Sunrise wasn't spectacular on that recent summer day. But even an ordinary dawn at Borobudur Temple — nine stone tiers stacked like a wedding cake and adorned with hundreds of Buddha statues and relief panels — provided a memorable experience.

The 9th century temple is in the center of Indonesia's Java island, a densely populated region with stunning vistas. Other highlights include the towering Hindu temple complex of Prambanan, like Borobudur a UNESCO World Heritage site, and Mount Merapi, the country's most active volcano, whose lava-covered slopes are accessible by jeep.

For investment and tourism, we would like to invite investors from the Middle East as much as possible because ... we have many tourism locations in Indonesia, not only one or two or four, but many

While the two temples draw many visitors, other foreigners head to the relaxing beaches of Bali, just east of Java and by far the most popular tourist destination in a nation of thousands of islands and almost 270 million people. More than 6 million tourists visited Bali last year, or about 40 percent of 15.8 million visitors to Indonesia overall, according to official figures.

Key to the plan is to upgrade provincial airports and improve access to outlying destinations, such as Lake Toba on Sumatra island, more than 1,300 kilometers from Jakarta, the capital. Yogyakarta, the provincial city from where visitors head to Borobudur and Prambanan, is getting a second airport, expected to be fully operational later this year. 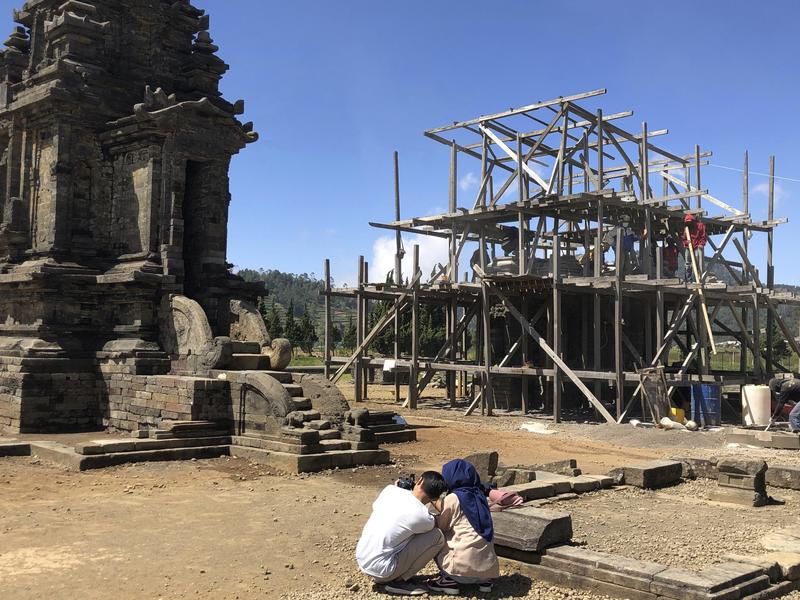 In this July 31, 2019 photo, tourists take photos of temples which is currently under renovation at Arjuna Temple in Dieng, Central Java, Indonesia. (KARIN LAUB / AP)

Widodo has been promoting his plan in meetings with foreign leaders and in recent interviews, including with The Associated Press, in hopes of encouraging foreign investment. The president of the world's most populous Muslim-majority nation told the AP in late July that as part of his push, he would like to see more business ties with the Middle East.

"For investment and tourism, we would like to invite investors from the Middle East as much as possible because ... we have many tourism locations in Indonesia, not only one or two or four, but many," said Widodo. He did not give specifics.

Muslim tourists, including from the Middle East, might also be an easier fit for some of the more conservative areas earmarked for tourism development. Tourism officials have played down the possibility of cultural friction that might accompany the influx of more non-Muslim visitors, arguing that Indonesia's brand of tolerant Islam can accommodate everyone.

"Maybe there are some particular locations that are very strict (religiously)," said Hiramsyah Thaib, who heads the "10 New Balis" initiative. "We believe we won't have any problems. Sometimes we have problems in the media, but not in reality."

The tourism plan remains key to Widodo's final five-year term, though at least one target — 20 million visitors this year — appears to have been too ambitious. The 2019 visitor tally is expected to be 18 million, based on current growth figures, said Thaib.

Still, the Indonesian tourism sector grew by 7.8 percent in 2018, or twice the global average, according to the World Travel and Tourism Council.

One of the 10 sites earmarked for development is the Borobudur Temple area and nearby Yogyakarta, a city of several hundred thousand people that is embedded in a large metro area. The city is a center of Javanese culture and a seat of royal dynasties going back centuries.

In 2017, former President Barack Obama and his family visited the city, where his late mother, Ann Dunham, spent years doing anthropological research. Obama, who lived in Indonesia as a child, toured Borodbudur and Prambanan during the nostalgic trip.

But while the Obamas got around with relative ease, including private jet travel, ordinary visitors struggle with congested streets packed with motorbikes weaving in and out of slow-moving traffic.

Travelers hoping to be in place at Borobudur just before sunrise need at least 90 minutes to get there from Yogyakarta, a journey of 40 kilometers. A 230-kilometer round trip to the Dieng highlands, with terraced fields, small temples and a colorful volcanic lake, requires a full day of travel, some of it on bumpy back roads. 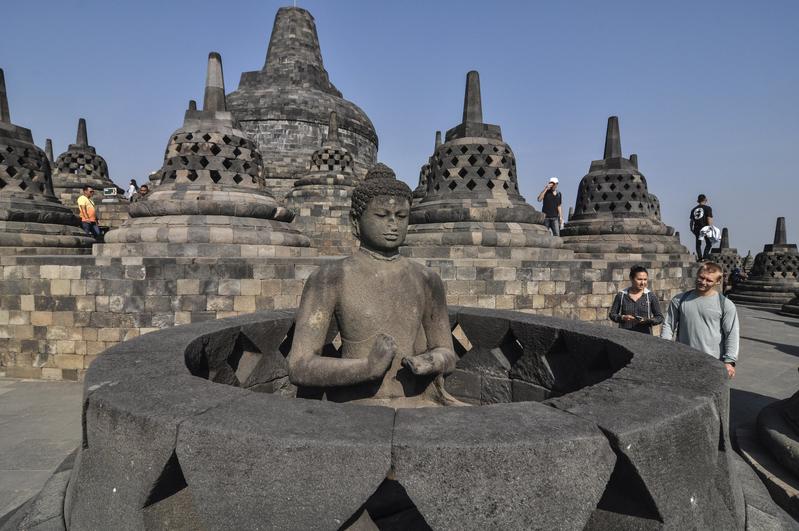 Anton McLaughlin, a 55-year-old visitor from York, England, said he was astounded by the number of motorbikes in the streets. Speaking during a jeep tour of the slopes of Mount Merapi, he said he's become more aware of the natural disasters Indonesians endure regularly. Indonesia straddles the Pacific "Ring of Fire" and is prone to earthquakes, tsunamis and volcanic eruptions. Merapi's last major eruption in 2010 killed 347 people, and the ruins of one destroyed hamlet were part of the tour.

"People just seem to crack on with life," McLaughlin said.

Just a day after his tour, the volcano shot out hot clouds and lava that flowed 2,000 meters down its slopes. No casualties or damage were reported.

Jan Tenbrinke, 37, from Zwolle in the Netherlands, said Bali is the next stop for his family of four, but that he hoped to get a better sense of Indonesian culture in Yogyakarta.

In the city, tourists can visit workshops for Batik textiles, silver jewelry and Kopi Luwak — coffee made from partially digested coffee cherries that were eaten and defecated by wild tree cats, or civets. Billed as the "world's most expensive coffee," Kopi Luwak became known to a wider audience in the 2007 Jack Nicholson-Morgan Freeman movie "The Bucket List." 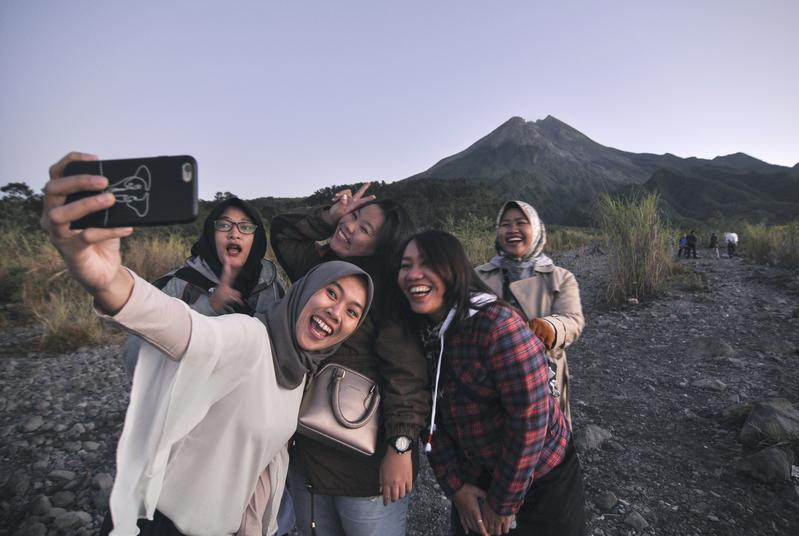 In this Aug 6, 2019 photo, local tourists take a selfie with the background of Mount Merapi, in Yogyakarta, Indonesia. (SLAMET RIYADI / AP)

Local museums, including two royal palaces and a former Dutch fort, pose a challenge for foreign visitors eager to learn more about local history and culture because they mostly lack easily accessible explanations in English.

Thaib, the tourism official, acknowledged that there is room for improvement. He said Indonesia is determined to catch up to other Asian nations, including Thailand, which he said began developing their tourism industries much sooner.

"There is still a lot of work," he said of his nation's efforts. "We believe we are on the right track."