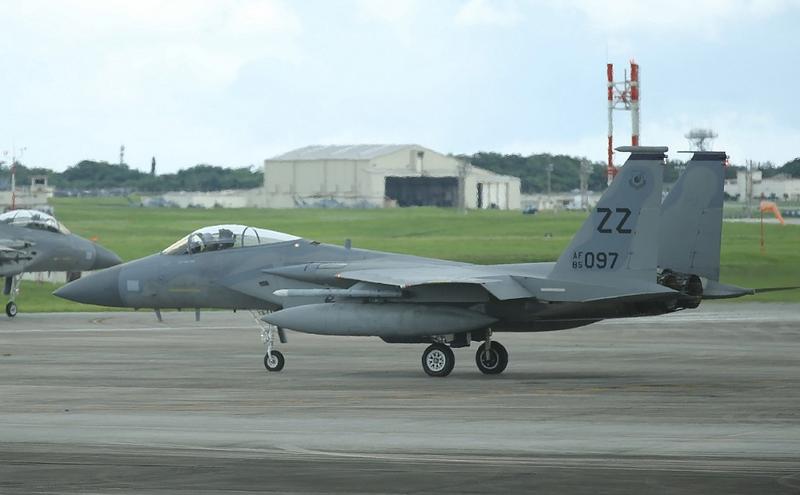 This May 15, 2017, picture shows a US Air Force F-15 fighter aircraft taxiing at Kadena air force base in Okinawa. (PHOTO / JIJI PRESS / AFP)

TOKYO - Okinawa on Wednesday protested to the central government over US forces using Kadena Air Base in Japan's southernmost prefecture for parachute training.

The Okinawan prefectural government believes that US forces using Kadena for parachute drills is in violation of a bilateral agreement that states that such exercises should be conducted on Iejima, a remote island off Okinawa.

"We cannot help but feel strong resentment because the Kadena base has been continuously used for parachute training," Deputy Okinawa Governor Kiichiro Jahana told Japanese foreign and defense ministry officials at the prefectural government building.

In protest to the drills, Deputy Okinawa Governor Kiichiro Jahana on Wednesday summoned Japanese defense and foreign ministry officials to voice his staunch displeasure and concern over the ongoing issue

In protest to the drills, Jahana on Wednesday had summoned Japanese defense and foreign ministry officials to voice his staunch displeasure and concern over the ongoing issue.

"There has been growing mistrust among people in Okinawa," Jahana also said at the meeting.

ALSO READ: Tens of thousands rally for removal of US base off Okinawa

In violation of a 1996 bilateral agreement inked between Japan and the US that states that such parachute drills be carried out on Iejima, US forces carried out a parachute drop at the Kadena base on Okinawa's main island on Tuesday night.

The latest training drill marks the fourth time this year that such drills have been held in locations outside the stipulations in the 1996 bilateral agreement, with the latest exercise involving 20 US military personnel parachuting down to the Kadena base by 8 pm on Tuesday, according to the prefectural government.

Further inflaming the incident, earlier Tuesday two US paratroopers landed off-target in a village on private land, 600 meters from a private residence in the village of Ie, which now plans to lodge its own complaint.

Okinawa Governor Denny Tamaki said the parachute drop at Kadena was "a clear violation of the accord" and that the prefectural government's repeated calls for the exercises to be stopped were being ignored by the US side.

Head of the Defense Ministry's Okinawa bureau Toshinori Tanaka described the latest incident as being "problematic" and explanations from the US side insufficient, adding that he would discuss the contentious issue with the US side further.

"We believe the US explanation given so far is neither sufficient nor appropriate," said Tanaka.

Hiroshi Kawamura, the Foreign Ministry's official in charge of Okinawan affairs, meanwhile, said it is "regrettable that the drill was conducted without a shared understanding between Japan and the United States."

Okinawa hosts the bulk of US military facilities in Japan, yet the island accounts for just a small fraction of Japan's total landmass.

READ MORE: US base: Rallies held in Okinawa against central govt's landfill work

As well as shouldering the majority of US bases and being victims of US base-linked workers' criminal activities, which span from rape and murder, to driving under the influence of alcohol, as well as a steady flow of accidents and mishaps involving U.S. military aircraft, the locals feel their opinions are being ignored by the central government.

In February, more than 70 percent of voters rejected the government's plans to move the US Marine Corps Air Station Futenma from the Ginowan region to the coastal Henoko area also located in Okinawa, with many citizens wanting the base relocated outside of Okinawa or Japan altogether.

Tamaki who denounces the central government's plans to relocate the base, said he hoped the referendum would provide local citizens with the opportunity to voice their opposition to the move, yet the central government is continuing to forge ahead with construction work for the new facility and in doing so bulldozing the feelings and opinions of local Okinawans.