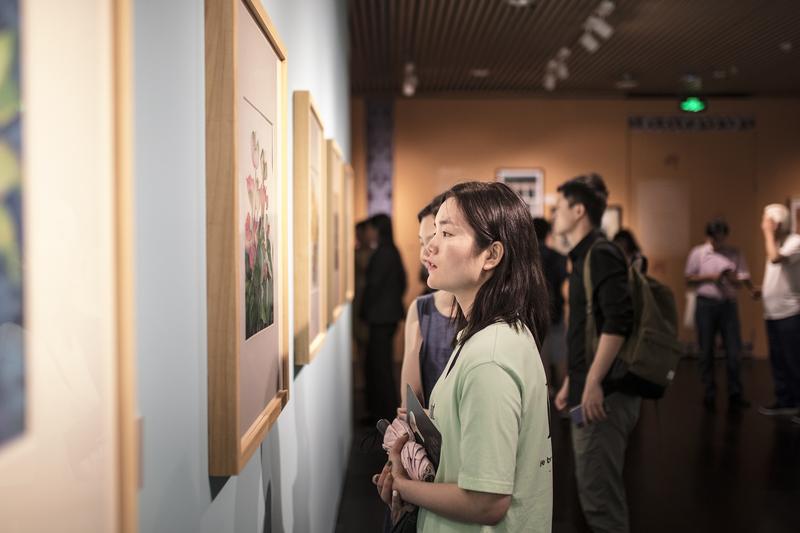 A visitor looks at a flora-themed painting by Chang Shana in Everlasting Beauty of Dunhuang, an exhibition of her and her late father Chang Shuhong's artworks at the Tsinghua University Art Museum through Sept 15. (PHOTO / CHINA DAILY)

Chang Shana was just 13 when her love affair with Dunhuang began. Born in France, she was the youngest member of a conservation and research team at the Mogao Caves led by her father Chang Shuhong (1904-94), a noted painter who had returned from Paris to become a founding director of the Dunhuang Academy.

"My father never felt that he had sacrificed a promising future as an artist for his hard job at Dunhuang."

Having spent six consecutive school holidays following her father's research team into the grottoes－a cultural repository of unparalleled beauty and diversity created over the course of a millennium－Chang Shana learned, like many graduates of fine art, to replicate the dazzling murals and Buddhist statues on paper.

In 1946, Chang Shana and her father held a joint exhibition in Lanzhou, Gansu province, where their paintings and drawings of the murals caused a great stir, and helped Chang Shuhong to raise funds for further research at Dunhuang.

Over the following decades, Chang Shuhong devoted himself to the preservation of Dunhuang's art legacy. Hailed as the "patron saint of Dunhuang", he lived there until he was transferred to Beijing in 1982.

And Chang Shana, who was the head of the former Central Academy of Arts and Design (currently the Tsinghua University's Academy of Arts and Design), has spent her entire life carrying on her father's commitment to Dunhuang. After conducting extensive research into the variety of patterns found on the murals, she applied these classic motifs to her own, modern designs.

To mark the dedication of the father and 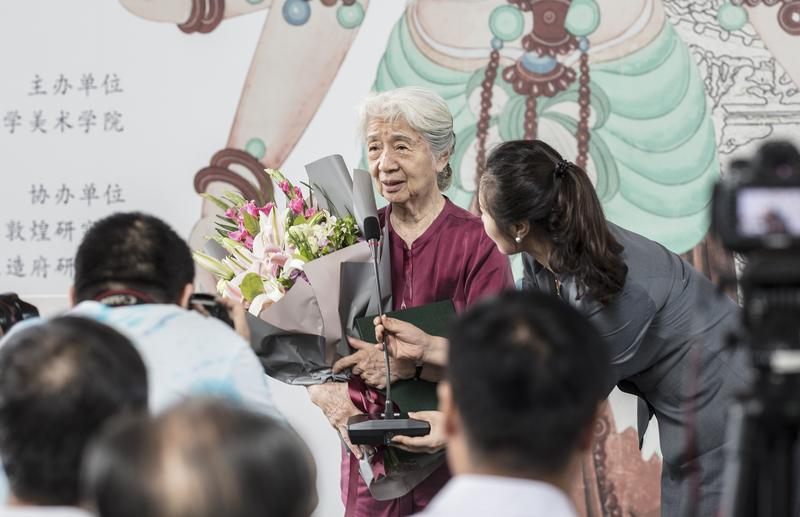 daughter to Dunhuang, a second joint exhibition, Everlasting Beauty of Dunhuang, is running at the Tsinghua University Art Museum through Sept 15. It explores how Dunhuang's treasure trove of history, art and culture altered the Chang family's destiny and continues to influence Chang Shana's work today.

The exhibition shows several oil paintings. They are copies of original works by Chang Shuhong which are now on a permanent display at the Zhejiang Provincial Museum in his hometown Hangzhou.

The paintings tell of Chang Shuhong's time in Paris, where he attended the prestigious art school Ecole nationale superieure des Beaux-Arts. His work earned him acclaim at the Paris Salon and helped to forge his reputation as an important artist.

But all this was soon to change, after he read Paul Pelliot's Catalog of Dunhuang Caves, and saw at the Guimet Museum a display of artworks plundered from Dunhuang by Western explorers. This not only ignited his lifelong interest in Dunhuang, but also honed his desire to protect it for posterity.

Amid wars and social chaos, Chang Shuhong and his team arrived in Dunhuang and started to clean up and bolster the ill-protected relic site. "My father never felt that he had sacrificed a promising future as an artist for his hard job at Dunhuang," Chang Shana, now 88, says.

While Chang Shuhong researched and cataloged the cave art, Chang Shana set about copying the murals by day and refining her painting skills by night.

"My father was strict about my studies. He asked me to get up early and practice the calligraphy found in Buddhist texts from the Tang Dynasty (618-907)," she says.

A painting in which Chang Shuhong depicted Jiucenglou, or the Nine-story Building, a symbol of Mogao Caves, in 1952. (PHOTO / CHINA DAILY)

She recalls her excitement each day when she climbed up the ladder leading into the caves with the other researchers.

"The caves had no doors and faced east. When dawn broke, the morning glow lit up the colorful murals. Those beautiful, benign Buddhist statues kept me company."

While Chang Shana was helping her father prepare for a Dunhuang art exhibition in Beijing during the early 1950s, she met two old family friends who had a great influence on how they set out to promote Dunhuang－the architect couple Liang Sicheng and Lin Huiyin. They were impressed by the art as well as Chang Shana's gift for painting.

"That was how I later became an assistant to Lin Huiyin, who was then a professor at Tsinghua University's architecture department. Although she was very sick, she put all her heart into showing me how to categorize all the sophisticated patterns I saw in the caves and then transform them into designs that could benefit people's everyday lives."

Chang Shana went on to use the vivid and rhythmically arranged motifs from the murals and the caisson ceilings that delighted her as a teenager to decorate the interiors of grand buildings, as well as applying them to ornamental objects such as plates, scarves and clothes, as visitors to the exhibition will see.

While she worked on her designs, she often remembered her father's words: "Shana, don't forget you are from Dunhuang. It's time to raise the profile of Dunhuang to a higher level." 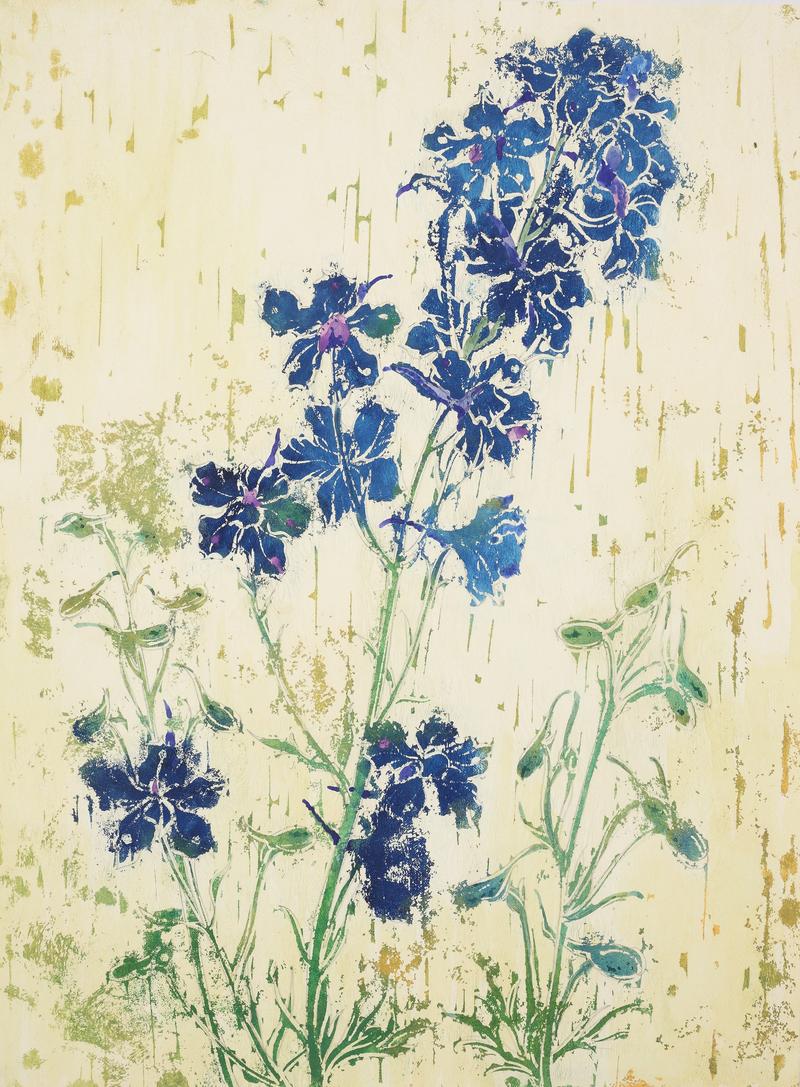 A painting of rocket larkspur flowers by Chang Shana in 1979. (PHOTO / CHINA DAILY)

Chang Shuhong moved to Beijing in 1982, where he served as an adviser to the National Cultural Heritage Administration before finally retiring. Chang Shana recalls how her father often said he felt like "a visitor" in Beijing and how he missed Dunhuang and wanted to return.

It is said the famous Japanese author and Buddhist philosopher Daisaku Ikeda once asked Chang Shuhong which profession he would choose after his reincarnation. Chang replied, "I'm not a Buddhist ... but if I were born into this world again, I would still be the man I am today, and I would continue my unfinished work (protecting Dunhuang)."

After his death, Chang Shuhong was buried in Dunhuang. His grave faces Jiucenglou (Nine-story Building), a landmark structure at the Mogao Caves. He painted the building in 1952, and this work is also on display at the Tsinghua University Art Museum.

At the end of the exhibition, there is a whiteboard mounted on the wall where visitors can leave comments. Chang Shana was the first one to write down her feelings at the exhibition's opening. 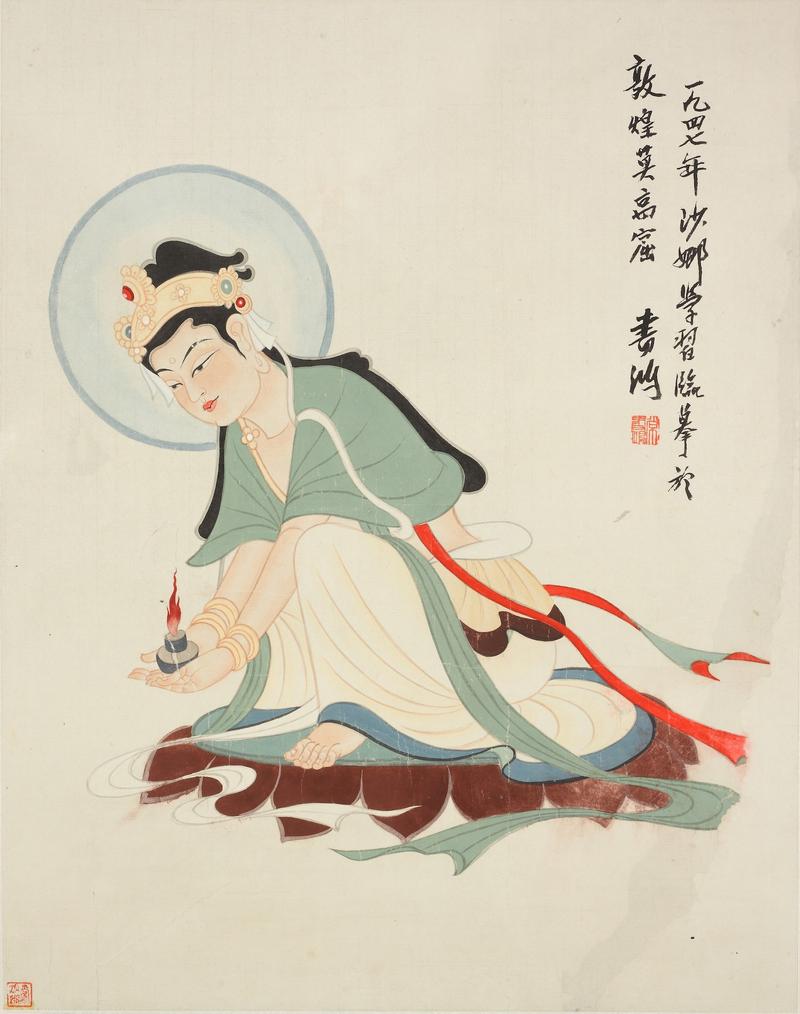 A painting Chang Shana copied from the Mogao grottoes in 1947. (PHOTO / CHINA DAILY)

She writes: "Dear dad, all my life I've been following your instructions to promote Dunhuang's art and culture, and help integrate them into people's lives. Today, it feels like we are meeting again!

"Please rest assured, because a lot of people in this country pay attention to and deeply love Dunhuang, and they will work together to restore it to its former glory as a jewel on the Silk Road."