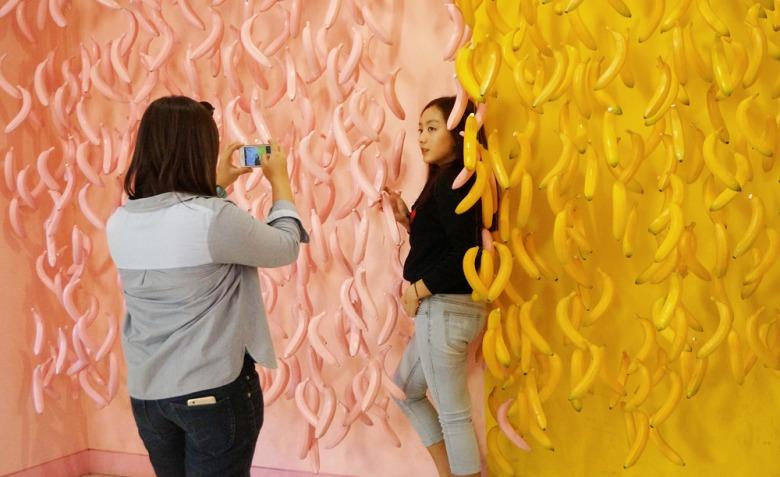 Visitors are seen at Rabbit Town’s ice cream area, which looks identical to the pop-up Museum of Ice Cream that started in New York City.

BANDUNG, Indonesia - Controversy surrounds the Rabbit Town theme park in Bandung for alleged plagiarism of world-known artists but visitors still flock the place as it is "instagrammable".

Despite fiery protests from netizens and art communities over the alleged plagiarism, which bombarded Rabbit Town’s Instagram account with harsh comments and some pledging to never set foot in the theme park, more and more people have gone to snap their best selfies there.

The excitement was evident on Wednesday, when the overflowing parking lot of Rabbit Town forced some visitors to park their cars outside its compound.

Nia, a mother of three, heard about the place and the plagiarism controversy from her eldest daughter. “It is okay [to plagiarize] because it is just intended for fun,” said Nia, who visited Rabbit Town for a monthly gathering with her friends.

Risky, a minimarket employee, learned about the place from her friend’s Instagram post and did not care much about the controversy, although she did read an article saying the place is ripping off renowned artwork.

The 21-year-old arrived in full makeup and brought a camera to snap her Instagram-worthy photos, including between the 88 white lampposts of Love Light — a carbon copy of Chris Burden’s Urban Light at the Los Angeles County Museum of Art (LACMA).

The visitors’ excitement was in stark contrast to what the authorities and art communities have expressed. 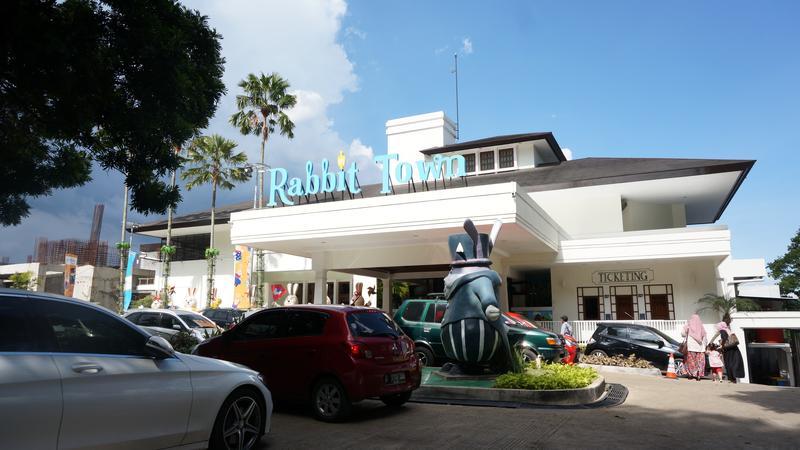 “It may seem like [Yayoi’s] work is an easy one, as it just consists of colorful dots,” he said, referring to Kusama’s Obliteration Room, which was copied as Rabbit Town’s Patrico Sticker.

“But the work is the result of a long creative process since she was young. A reflection of her hallucinations. Yayoi is an antiwar activist and feminist. When someone blatantly just takes the visual side of it, it is an insult to such sublime work.”

Bandung culture and tourism department head Kenny Dewi Kaniasri said her department had been left in the dark about Rabbit Town’s business operations, given that it obtained its business permit from the one-door investment and permit
department.

“Honestly, I am deeply concerned and embarrassed by this issue,” Kenny said.

As the accusation of plagiarism went viral, she sent her team to counsel Rabbit Town’s management two weeks ago, asking them to include more local content at the park. “They promised to include information about whether the installations are inspired by this or that work. I will soon check whether they have fulfilled their promise or not,” she said.

Art researcher and auctioneer Amir Sidharta considered that putting the “inspired by” label could be a good enough solution. “But still, it depends on whether the artists feel okay with it or not,” he said.

He suggested another way for the park to cater to selfie-loving visitors without ripping off celebrated artwork: “The owner can start by commissioning several Indonesian artists to create works, especially for selfies. This can be the start of an interesting collection, which later may even be featured in a real museum as the artworks capture the selfie trend of its era,” Amir said.

As reported by artnet, the Museum of Ice Cream has objected to Rabbit Town’s “blatant disregard of artist’s intellectual property”.

Creative Economy Agency (Bekraf) head Triawan Munaf said he was ready to support the investigation into alleged plagiarism if the LACMA wanted to pursue the issue.

He even requested the help of several curators to contact the LACMA, the home of Burden’s Urban Light.

“I want them to send a legal notice or formal letter to the owner [of Rabbit Town]. I need to be convinced the LACMA is really bothered by this issue,” Triawan told The Jakarta Post over the phone.

“I don’t want the government to be trigger happy. We want to take careful steps on this matter,” he added, saying that should the LACMA or other bodies lodge a complaint, Bekraf will help follow up the intellectual property rights case and inform the police.

Located north of Bandung, Rabbit Town is formerly the private residence of Kagum Group CEO and chairman, Henry Husada, who built his business empire with his factory outlets and hotels in Bandung. Rabbit Town is named after his Chinese zodiac sign.

Aside from the installations, the two-hectare park also houses live animals, such as monkeys, doves and, of course, rabbits.

Nabila, a public relations officer at Rabbit Town, declined to comment on the accusation of plagiarism but promised to give a full explanation sometime this month. The park is scheduled for its grand opening on April 22.

The alleged rip-offs, Kenny noted, may also hurt the reputation of Bandung — a city of design in UNESCO's Creative City Network since 2015.

Kenny said UNESCO will evaluate the Creative Cities Network members, including Bandung, to assess whether the city still deserve its place in the network. “It becomes ironic that in this city, there is still a business owner with lack of appreciation toward the works of other artists,” she said.

Bandung Creative Community Forum (BCCF) head Tita Larasati said she is not worried that the controversy may hurt Bandung’s chance to retain its place in the network.  Instead, it gives BCCF momentum to call on Bandung’s city administration to give more space for Bandung artists and the creation of local content.

“As long as we balance it with achievements, we should not worry. We just need to educate them [people who lack an appreciation of art].”