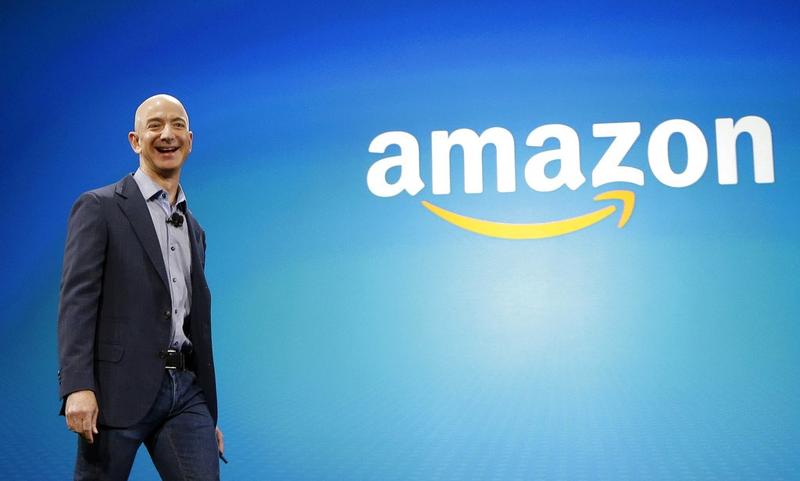 In this June 16, 2014, file photo, Amazon CEO Jeff Bezos walks onstage for the launch of the new Amazon Fire Phone, in Seattle. In a milestone announced on March 6, 2018, Bezos has become the first person to amass a fortune surpassing US$100 billion in Forbes magazine's annual ranking of the world's moguls. (TED S. WARREN / AP)

SAN FRANCISCO - Amazon CEO Jeff Bezos has become the first US$100 billion mogul to top Forbes' annual rankings of the world's richest people. But President Donald Trump's fortune sank during his first year in office despite a surging stock market.

The Bezos milestone, revealed in Tuesday's release of Forbes' closely watched list , underscores the growing clout of both Bezos and the company that he founded in 1994 as an online bookstore. Forbes' breakdown provided further evidence that serving as president isn't the most lucrative job, even when most of the rich are getting richer.

All told, the world now holds more than 2,200 billionaires with a combined fortune of US$9.1 trillion, up 18 percent from ago, according to Forbes' calculations.

Although Trump is part of that elite group, he saw his fortune sink by about US$400 million to US$3.1 billion during his first year in office. The decline left him as the world's 766th richest person, more than 200 places lower than his 544th spot on last year's Forbes list.

Bezos seized the top ranking for the first time and has added the distinction of becoming the first person to break the US$100 billion barrier since Forbes began compiling its list in 1987. As of Feb 9, Bezos' wealth stood at US$112 billion, up from about US$73 billion last year, according to Forbes.

Most of Bezos' fortune is tied up in Amazon stock, which soared 59 percent during the period tracked by Forbes.

Bezos has used a sliver of his wealth to buy The Washington Post - a target in Trump's fusillades against the media - and to finance Blue Origin, a maker of rockets that aim to sell flights into space.

Meanwhile, Amazon has expanded beyond its bookselling origin to become a retailer of almost everything imaginable . It now even sells groceries in brick-and-mortar stores after its US$13.7 billion purchase of Whole Foods Markets last year.

Amazon also has built a network of data centers that hosts the online services of other companies, and produces award-winning shows that compete against traditional TV networks. More recently, it branched into health care in a partnership involving Berkshire Hathaway and its CEO, Warren Buffett, whose US$84 billion fortune ranks third on the Forbes list.

Bill Gates, Microsoft's co-founder and an occasional bridge partner of Buffett's, ranks second on the Forbes list with wealth of US$90 billion.

Both Gates, 62, and Buffett, 87, have committed to giving away most of their wealth while Bezos, 54, hasn't said much about his philanthropic plans.