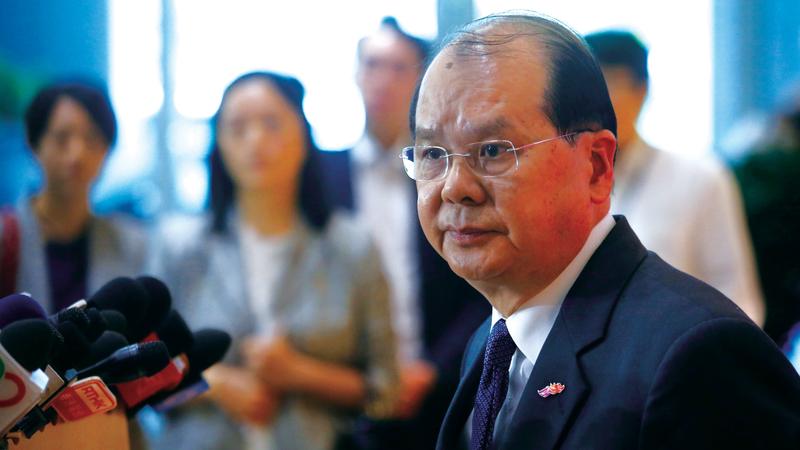 There would be no room for discussing such advocacy, nor would there be any compromises in safeguarding national security, sovereignty and territorial integrity, Cheung added

Calling the FCC’s move “unacceptable” and “inappropriate”, Cheung stressed that the SAR government would not tolerate any Hong Kong independence advocacy, as it is a blatant violation of the Basic Law and a direct affront to national security, sovereignty and territorial integrity.

There would be no room for discussing such advocacy, nor would there be any compromises in safeguarding national security, sovereignty and territorial integrity, Cheung added.

Cheung made the remarks while meeting the press hours after the FCC hosted a talk delivered by Hong Kong National Party convener Andy Chan Ho-tin. The party is an unregistered political group that publicly advocates for Hong Kong independence.

He said Chan’s talk “obviously promoted the independence of Hong Kong”, and the FCC had provided a public platform to espouse such views.

Hong Kong is a plural society that well recognizes freedoms of speech and the press. But that does not mean there is no limit for such freedoms, Cheung noted.

“The exercise of press freedom and individual freedom, particularly speech freedom, has to be within the confines of the law, within bounds of the law. In other words, there is a limit beyond which you mustn’t overstep,” he said.

Article 1 of the Basic Law — the city’s constitutional document — stipulates that the HKSAR is an inalienable part of the People’s Republic of China.

According to Cheung, the government leases a premise in Central to the FCC under a seven-year contract which ends in 2023.

Cheung said he hoped similar incidents would not happen in the future as it does no good to the city.

While Hong Kong is known for being inclusive, its tolerance should not be abused, he added.

The HKNP is the only political party in Hong Kong that explicitly advocates Hong Kong independence and promotes it on its website.

On July 17, police in the city proposed that the Security Bureau ban HKNP’s operations in accordance with the Societies Ordinance. The party has until Sept 4 to submit a written document to explain why the ban is unnecessary.

Chief Executive Carrie Lam Cheng Yuet-ngor is currently in Beijing attending the first meeting of the leading group for the development of the Guangdong-Hong Kong-Macao Greater Bay Area.