Gandhi scion comes into his own as India polls near finish 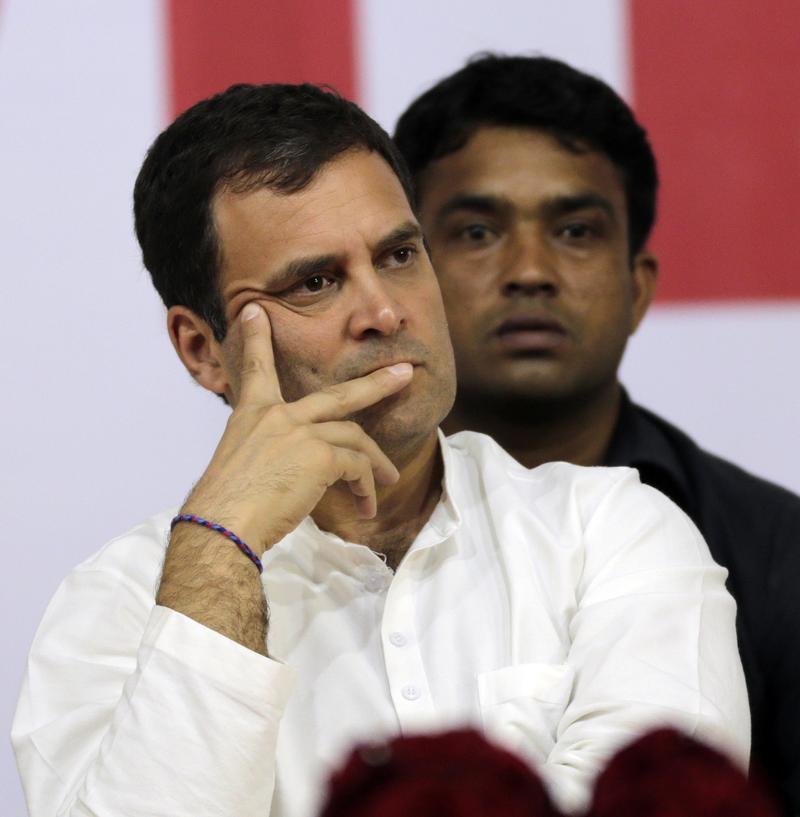 NEW DELHI — With India's general election inching toward the finish line, the battle for one seat in the northern state of Uttar Pradesh is being examined to see whether the scion of India's most important modern political dynasty can retain his seat and revive his party's fortunes.

Rahul Gandhi's biggest political triumph in 15 years was easily Congress' win in assembly elections in December, wrangling power away from Modi's BJP in the states of Rajasthan, Madya Pradesh & Chhattisgarh

After 15 years in politics, Rahul Gandhi is beginning to articulate a vision for India that some observers say is making him a more credible leader. But it's unclear whether Gandhi, who is president of the opposition Congress party, has rallied enough support in time to defeat Prime Minister Narendra Modi.

Gandhi, 48, has often been the object of derision from political rivals, who accuse him, despite his pedigree, of being a lightweight. In contrast to Modi, a tea seller's son who went on to become India's leader, Gandhi inherited his power, making him an easy target of charges of nepotism and dynasty politics.

For years, Modi and other leaders of his Bharatiya Janata Party have referred to Gandhi as the "shehzada," or prince. Critics accuse him of being aloof, a cosmopolitan elite detached from the harsh realities of India's legions of rural poor.

After Congress' hold in Parliament collapsed from 206 of 543 seats to a mere 44 seats in 2014 elections, Gandhi's political obituary was all but written.

But with small businesses and farmers hurt by some of Modi's signature policies, and mob attacks on Muslims on the rise, Gandhi and the inclusive, secular politics the Congress party has long represented are starting to resonate.

Gandhi is seeking re-election for a fourth consecutive time in the Uttar Pradesh town of Amethi. The general election, which is being held in seven phases, ends May 19, and vote counting begins on May 23. 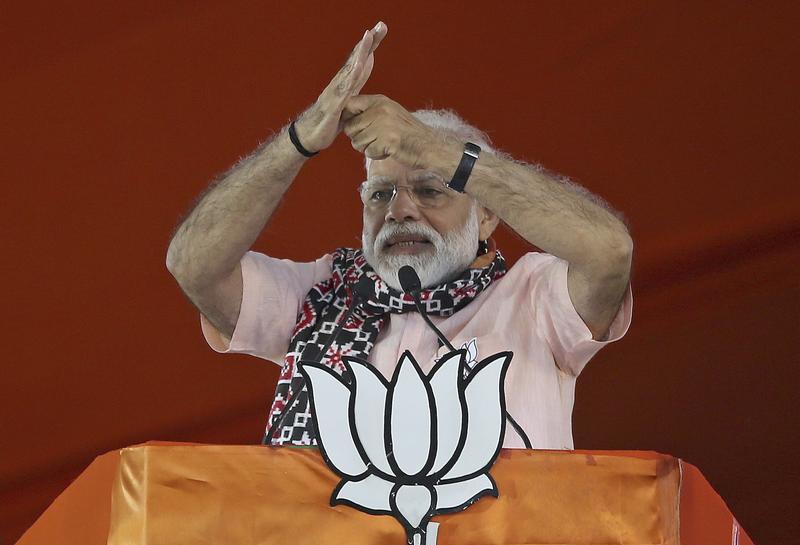 In this April 1, 2019 photo, Indian Prime Minister Narendra Modi gestures as he speaks during an election campaign rally of his Bharatiya Janata Party (BJP) in Hyderabad, India. (MAHESH KUMAR A / AP)

"In finding his feet in politics, Gandhi has become a perfect foil for Modi," said political commentator Seema Mustafa. "He comes through as humble, democratic and responsive, and plays on love, peace and humanity as against hate and aggression. The smile against the wagging finger, the embrace against the threat — it is all now part of a persona, natural and yet crafted."

If Gandhi came across as a reluctant politician, the reasons are not hard to find. His family, starting with his great-grandfather, Jawahalal Nehru, has produced three prime ministers. Two of them, his grandmother Indira Gandhi and father, Rajiv Gandhi, were assassinated in office.

Even after becoming a lawmaker, he distanced himself from political life, refusing to even call himself a candidate for prime minister. In 2014, he was re-elected in Amethi, considered a Gandhi bastion, by only a thin margin.

Yet, under relentless public scrutiny, Gandhi has honed his public speaking and leadership skills. He now comes across as more confident, forceful and credible, according to political analysts. And he is also starting to come across as a vigorous and even pugnacious campaigner.

In Parliament, where he's represented Amethi since 2004, he had been a backbencher, leaving the party reins largely to his mother, Sonia Gandhi. 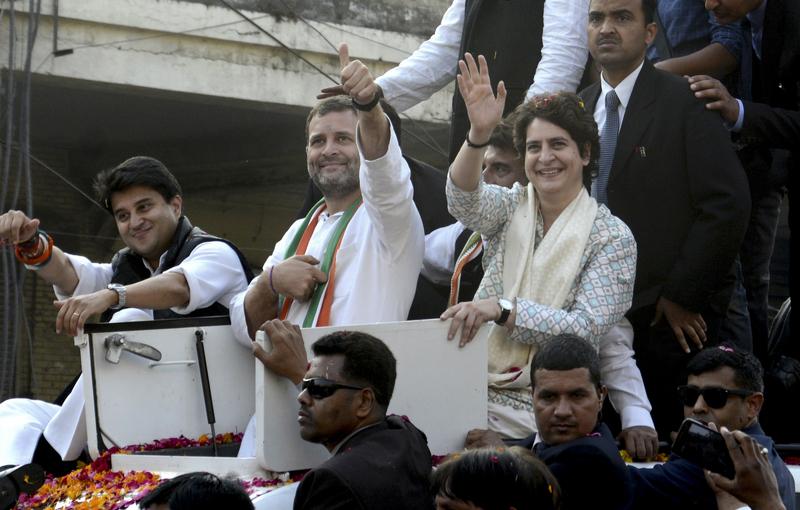 But he's started to hit back. One recent barb in particular struck home — he taunted Modi for wearing a monogrammed suit worth US$14,400, saying that Modi's "suit-boot" government was only for the rich.

Perhaps most important, Gandhi has shown he has the stomach for a fight, even challenging Modi, a much more experienced politician, to a public debate. Modi has ignored the challenge.

Gandhi's biggest political triumph in 15 years was easily Congress' win in assembly elections in December, wrangling power away from Modi's BJP in the states of Rajasthan, Madya Pradesh and Chhattisgarh.

Suhsmita Dave, head of the Congress party's women's wing, said she has known Gandhi well for a decade and he's basically the same man. The only difference, she said, is that earlier, he held back out of respect for protocol, letting his mother run the party and Manmohan Singh lead the Congress-controlled government.

"He let them get on with their jobs. This gave the BJP a chance to paint him as a reluctant politician," Dave said. "But the truth is that he was never a leader in a hurry. He waited his turn. When it came, he took the bull by the horns and has been vocal and aggressive. There is no point firing your gun until the time is right."

Gandhi brought his sister, Priyanka Gandhi Vadra, into the party, appointing her to oversee a post in the eastern part of Uttar Pradesh that includes Varanasi, the Hindu holy city where Modi is up for re-election as a member of Parliament. Her popularity has drawn huge crowds to campaign events, but it may not be enough to counter her brother's perceived sluggishness. 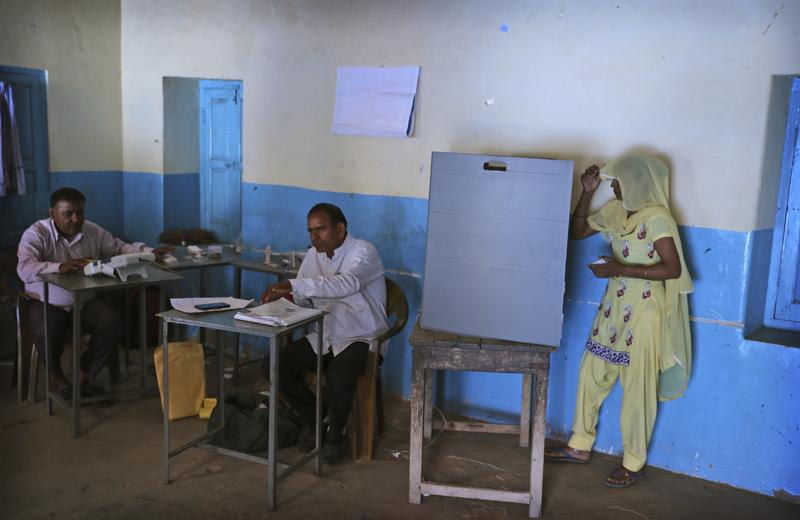 An Indian woman casts her vote at a polling station in Neemrana, in the northern Indian state of Rajasthan, May 6, 2019. (MANISH SWARUP / AP)

Gandhi has been criticized for his low attendance in the last Parliament, showing up just over half the time; for being abroad at critical moments; for describing power as "poison"; for not cultivating a younger generation of Congress leaders; and for failing to fulfill a promise to overhaul his party's hierarchy.

He also was unable to forge an alliance with two important opposition parties in vote-rich Uttar Pradesh to wrest power away from the BJP in the current election. In New Delhi, too, he was unable to tie up with the ruling party to combat the BJP.

Whatever the result of the election, Gandhi is now seen as a feisty opponent, most recently in an interview with the daily Indian Express newspaper.