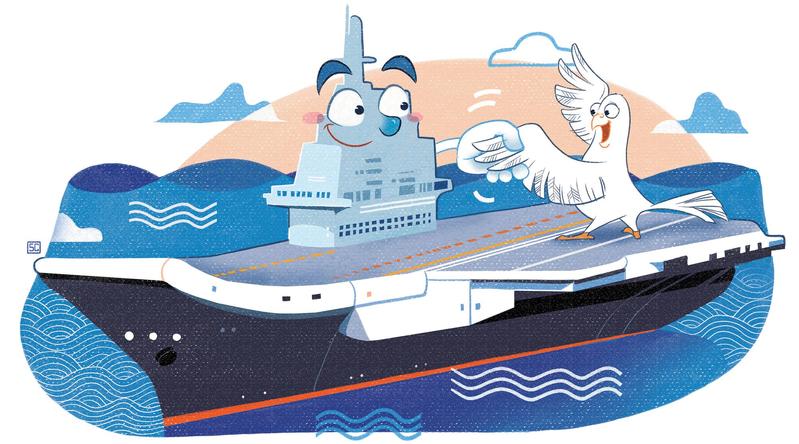 China's first totally domestically built aircraft carrier will reportedly start its sea trial soon, strengthening not only the country's naval power but also the overall national defense. If the Type 001 Liaoning, China's first aircraft carrier, was the path-breaker then the new aircraft carrier (Type 001A) will lead the scientific modernization of the defense sector. The as-yet unnamed 50,000-ton Type 001A aircraft carrier has a design similar to the 60,000-ton Liaoning, with a ski jump-style deck for taking off and a conventional oil-fueled steam turbine power plant.

The main difference between the two aircraft carriers is that the new one has more space for aircraft and helicopters. The new aircraft carrier has made significant improvements in tonnage, velocity, radar system and endurance - compared with the Liaoning - and has better combat capability, which will be further boosted when the ski-jump takeoff system will be replaced by the catapult takeoff system in the second completely domestically built aircraft carrier which is in the works.

Once the Type 001A is formally commissioned, it will become the flagship of China's naval vessels, and undertake more important strategic tasks of deterrence and actual combat at sea. That, however, doesn't mean the new aircraft carrier will compromise the importance of the Liaoning.

The Liaoning has two main long-term tasks - trial and training being the first. The Liaoning is an "exploration". It may have some technical defects, but it also was a training ground which provided engineers and experts the theoretical knowledge and precious experience to help build the new aircraft carrier and will continue playing this precious role.

The Liaoning's second task is to maintain maritime security. Those wondering whether the Liaoning, as a training ship, is capable of going into real combat, should know that the Liaoning is a real military aircraft carrier, not a simulator, and its combat effectiveness will develop as the training level of its crew and engineers matures.

The prime reason for China to develop aircraft carriers is to safeguard national security, and regional and world peace, and there is little doubt the Liaoning can help do so. Still, the development of China's aircraft carriers is so modest and limited that it meets only part of its maritime security needs. Here, it is vital to stress that China will never seek maritime hegemony.

Considering China's long coastline, numerous islands, vast sea area, and the serious violations of its sovereignty and interests by some countries, China may build more aircraft carriers in order to meet its minimum maritime safety requirements.

Technological prowess, too, is needed to develop more advanced aircraft carriers, and thanks to the Liaoning and the new Type 001A vessel, China has mastered aviation and electronics technologies. The country is also breaking new ground in nuclear power, cloaking techniques, artificial intelligence and directional energy technology, which are needed to build more advanced aircraft carriers.

An aircraft carrier is a symbol of state power and the core of a navy's combat force. It is also an essential military equipment to maintain national maritime safety. Only when a number of Chinese naval formations with aircraft carriers sail the vast oceans can they effectively safeguard China's ocean sovereignty, promote national reunification, thwart the containment and blockade policies of some powers, and help protect China's overseas interests and maintain peace in the region and beyond.

The author is an expert on military issues.