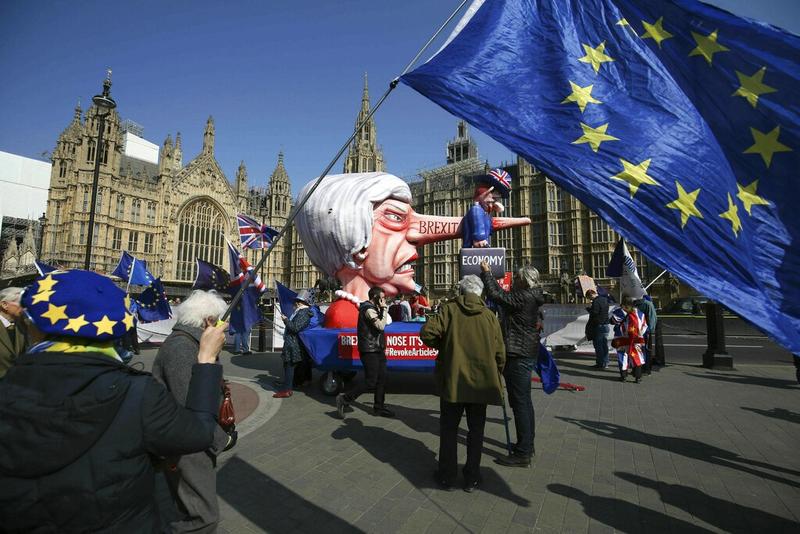 This April 1, 2019 photo shows anti-Brexit demonstrators near College Green at the Houses of Parliament in London. (JONATHAN BRADY / PA VIA AP)

LONDON — Britain's Parliament has spoken — and it has said no, again.

Lawmakers seeking a way out of the country's Brexit morass on Monday rejected four alternatives to the government's unpopular European Union divorce deal that would have softened or even halted Britain's departure.

With just 12 days until the UK must come up with a new plan or crash out of the bloc in chaos, the House of Commons threw out four options designed to replace Prime Minister Theresa May's thrice-rejected Brexit deal — though in some cases by a whisker.

The result leaves May's Conservative government facing difficult and risky choices. It can gamble on a fourth attempt to push May's unloved deal through Parliament, let Britain tumble out of the bloc without a deal, or roll the dice by seeking a snap election to shake up Parliament

The result leaves May's Conservative government facing difficult and risky choices. It can gamble on a fourth attempt to push May's unloved deal through Parliament, let Britain tumble out of the bloc without a deal, or roll the dice by seeking a snap election to shake up Parliament.

Brexit Secretary Stephen Barclay said the government would continue to seek support for a "credible" plan for leaving the EU.

"This House has continuously rejected leaving without a deal just as it has rejected not leaving at all," he told lawmakers in the House of Commons after the votes. "Therefore the only option is to find a way through which allows the UK to leave with a deal."

May has summoned her Cabinet for a marathon meeting Tuesday to thrash out the options. The prime minister, who is renowned for her dogged determination, could try to bring her Brexit agreement back for a fourth time later this week.

Monday's votes revealed a preference among lawmakers for a softer form of Brexit — but not a majority to make it happen.

The narrowest defeat — 276 votes to 273 — was for a plan to keep Britain in a customs union with the EU, guaranteeing smooth and tariff-free trade in goods. A motion that went further, calling for Britain to stay in the EU's borderless single market for both goods and services, was defeated 282-261.

A third proposal calling for any Brexit deal Britain strikes with the EU to be put to a public referendum was defeated 292-280.

The fourth, which would let Britain cancel Brexit if it came within two days of crashing out of the bloc without a deal, fell by a wider margin, 292-191. 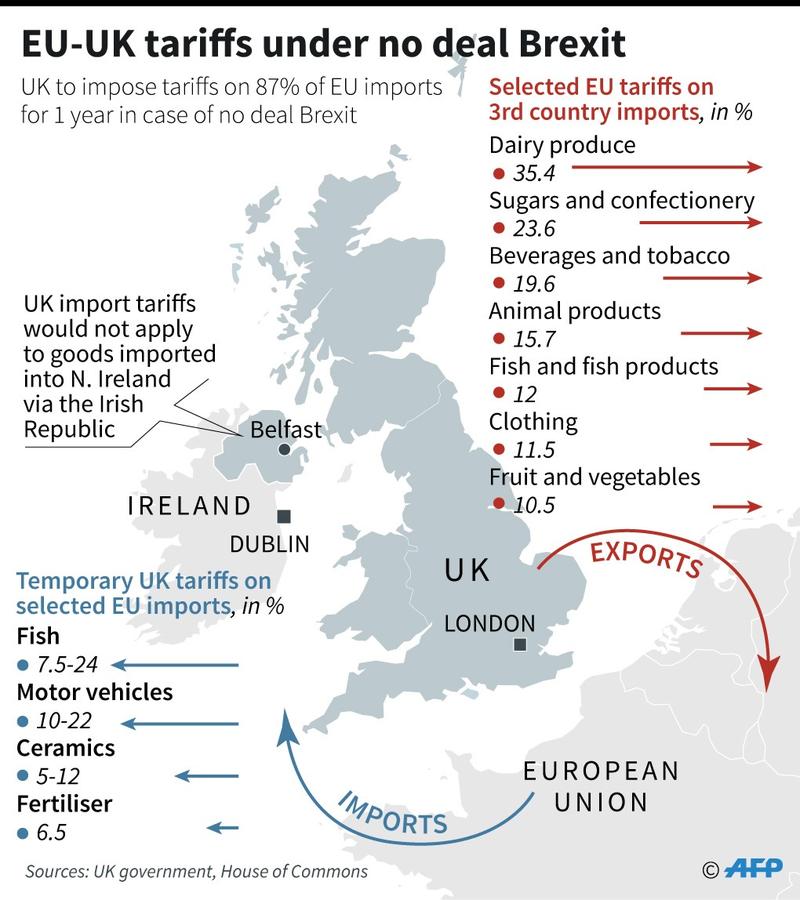 May had already ruled out all the ideas under consideration. But the divorce deal she negotiated with the EU has been rejected by Parliament three times, leaving Britain facing a no-deal Brexit that could cause turmoil for people and businesses on both sides of the Channel.

Conservative lawmaker Nick Boles, architect of the single-market option, acknowledged he had failed in his attempt to break the deadlock.

"I have failed chiefly because my party refuses to compromise," Boles added, announcing that he was quitting the Conservatives to sit as an independent in Parliament.

The April 12 deadline, imposed by the EU, gives Britain's politicians less than two weeks to bridge the hostile divide that separates those in her government who want to sever links with the EU and those who want to keep the ties that have bound Britain to the bloc for almost 50 years.

Lawmakers have carved out more time on Wednesday for further votes on Brexit options.

The impasse is raising expectations that lawmakers or the government could try to trigger a snap election in the hope a new configuration in Parliament would break the Brexit logjam. But the Conservatives are worried that could hand power to the opposition Labour Party.

The lack of consensus reflects a Parliament and a government deeply divided over how — and whether — to leave the EU.

Justice Secretary David Gauke said leaving the bloc without a deal was "not the responsible thing for a government to do."

But Chief Secretary to the Treasury Liz Truss said it would be better than a soft Brexit.

The Brexit impasse has alarmed businesses, who say the uncertainty has deterred investment and undermined economic growth.

The chief executive of industrial manufacturer Siemens UK implored lawmakers to unite around a compromise deal, saying "Brexit is exhausting our business and wrecking the country's tremendous reputation as an economic powerhouse."

Juergen Maier urged lawmakers to keep Britain in a customs union with the EU, saying that would allow frictionless trade to continue. In a letter published by the Politico website, Maier said "where the UK used to be beacon for stability, we are now becoming a laughing stock."

EU leaders have called a special summit on April 10 to consider any request from Britain for a delay to Brexit — or to make last-minute preparations for Britain's departure without a deal two days later.

"The House of Commons again votes against all options," he tweeted. "A hard #Brexit becomes nearly inevitable. On Wednesday, the UK has a last chance to break the deadlock or face the abyss."