US, ROK discuss next steps on Korean Peninsula issue 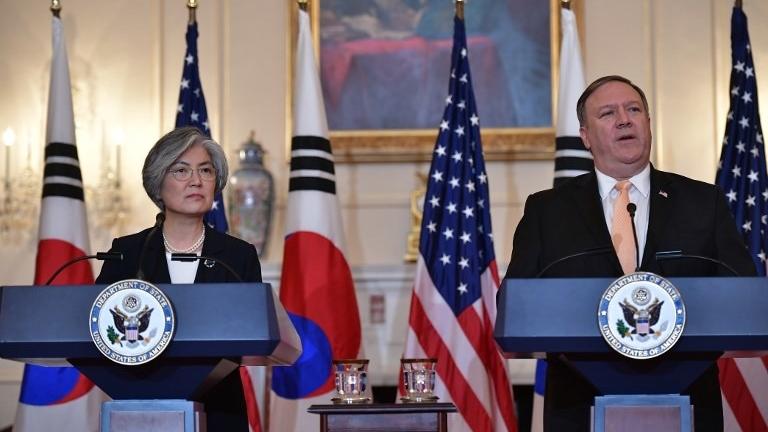 US Secretary of State Mike Pompeo and the Republic of Korea's Foreign Minister Kang Kyung-wha take part in a joint press conference at the State Department in Washington, DC, on May 11, 2018. (MANDEL NGAN / AFP)

WASHINGTON - The US State Department said on Monday that State Secretary Mike Pompeo and the Republic of Korea (ROK)'s Foreign Minister Kang Kyung-wha have discussed next steps on the Korean Peninsula issue after the summit between US and the Democratic People's Republic of Korea (DPRK) leaders.

According to a statement from State Department spokesperson Heather Nauert, Pompeo and Kang on Sunday discussed "next steps in the wake of the historic Singapore summit" via phone

According to a statement from State Department spokesperson Heather Nauert, Pompeo and Kang on Sunday discussed "next steps in the wake of the historic Singapore summit" via phone.

The two diplomats also pledged to maintain close coordination over the issue and reaffirmed that the US and ROK "remain committed to the goal of complete, verifiable, and irreversible denuclearization (CVID)," or CVID as it is known in nuclear circles.

The first meeting between a sitting US president and a DPRK leader on June 12 was a significant and positive move that the world had long called for, although there was no expectation that the half-day summit would be able to iron out all differences and remove deep-seated mistrust between the two countries.

The two sides issued a joint statement after the meeting, promising to build new bilateral relations and work toward the "complete denuclearization of the Korean Peninsula."

US and ROK defense ministries said earlier that they would suspend the annual joint military exercises scheduled for August, the most-anticipated move after the DPRK-US summit.