This picture taken on May 23, 2010 shows a Nepalese sherpa collecting garbage, left by climbers, at an altitude of 8,000 metres during the Everest clean-up expedition at Mount Everest. (NAMGYAL SHERPA / AFP)

LUKLA, NEPAL - Mt. Qomolangma, once negatively recognized as the "world's highest junkyard" is set to become cleaner as 30,000 porters have been mobilized for waste collection and disposal from the mountain's southern side.

The clean-up drive was launched recently near Lukla Airport, one of the world's most dangerous airport, yet a vital gateway to the world's highest peak.

"Our major task is to keep Everest (Mt. Qomolangma), which is the pride of the world, clean. This campaign aims to transport 100 tons of non-burnable garbage from the Everest region to Kathmandu in 2018," Ang Dorje Sherpa, chairman of the Sagarmatha Pollution Control Committee (SPCC)said.

SPCC, an environmental conservation organization, has made it mandatory since 2013 that every climber should carry down eight kg of trash, but for trekkers there is no such regulation. Due to this, more than 100 tons of waste gets collected in the region annually.

According to Nepalese government statistics, nearly 50,000 domestic and foreign trekkers visit the Mt. Qomolangma region annually while over 400 mountaineers attempt to scale the mountain's peak. 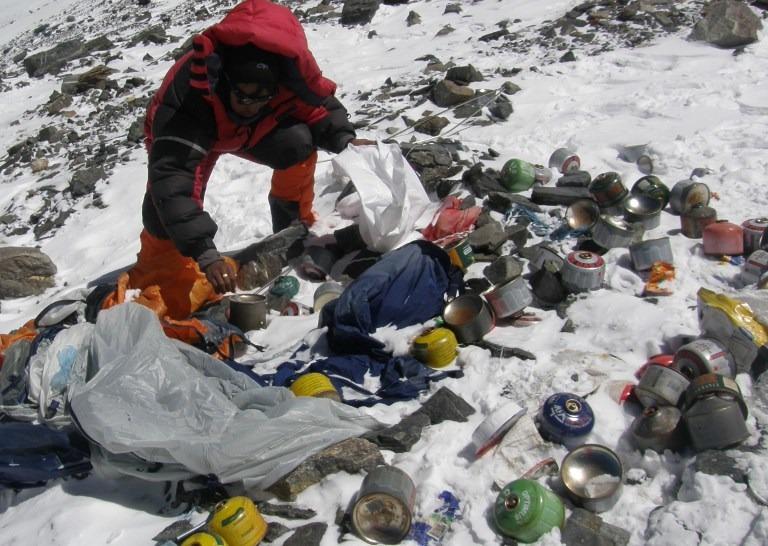 This picture taken on May 23, 2010 shows a Nepalese sherpa collecting garbage, left by climbers, at an altitude of 8,000 metres during the Everest clean-up expedition at Mount Everest. (NAMGYAL SHERPA / AFP)

The trash was collected by different local groups in more than a dozen villages while the waste was transported down the mountain in sacks by porters and yak-hybrid animals known as zopkyos. The clean-up covered settlements from up to 5,000 meters near the base camp, to Lukla airport located at an altitude of 2,805 meters.

On the first day of the campaign, thousands of kg of waste was sent off to Kathmandu from Lukla via different planes belonging to Tara Airlines, a subsidiary of Yeti Airlines, one of the leading private airlines in Nepal.

The airlines has set an ambitious target of flying out 100 tons of waste from the region in 2018, as a part of its commitment to the UN Sustainable Development Goals against climate change.

The company's CEO Umesh Chandra Rai told Xinhua that "we hope that this campaign will help the local people to maintain a pristine, natural and unspoiled environment so that more trekkers will come from everywhere, making the trekking industry here more sustainable."

Valerie Julliand, United Nations resident coordinator in Nepal, said "there is a need to keep the area pristine and clean and therefore this effort is really laudable because it really puts at its center the service all humanity."

This picture taken on May 28, 2010 shows Nepalese sherpa climbers posing after collecting garbage from the Everest clean-up expedition at Everest Base Camp. (NAMGYAL SHERPA / AFP)

On March 17 after the launch program, a small passenger airplane was retrofitted into a cargo carrier that transported the collected waste to the capital city of Kathmandu.

After landing at the capital's airport, the waste was handed over to a private recycling social enterprise "Blue Waste to Value" for the recycling and management process.

Asish Khanal, a manager of the company in charge of the handover, told Xinhua that they will crush all the waste and then send it to recycling centers for different vendors in Kathmandu Valley and the latter will facilitate its use as raw materials for factories.