Ukraine's leader: Trump didn't use US military aid as lever 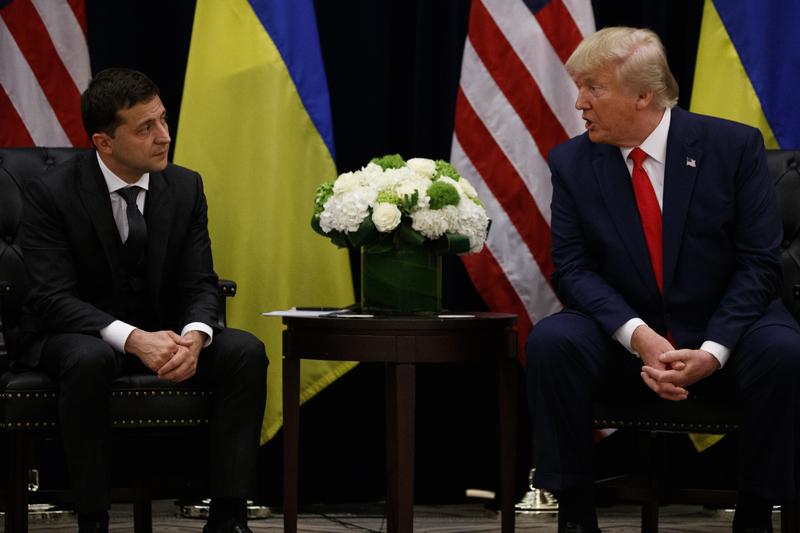 KYIV, Ukraine — Ukraine's president said Tuesday that no one explained to him why millions of dollars in US military aid to his country was delayed, dismissing suggestions that US President Donald Trump froze the funding to pressure Ukraine to investigate Democratic rival Joe Biden.

For President Volodymyr Zelenskiy and many Ukrainians, solving Ukraine's conflict with Russian-backed separatists is more important than whatever happens in the US election campaign

President Volodymyr Zelenskiy is struggling to distance himself from US politics — and to contain the damage to Ukraine and his own reputation from a July phone conversation with Trump that unleashed a congressional impeachment inquiry.

"It is impossible to put pressure on me," he told reporters Tuesday. "Many people try to influence me," he said, but "I am the president of independent Ukraine."

Zelenskiy said that in discussions with Trump, he repeatedly stressed the importance of US military aid to help Ukraine battle Russian-backed separatists.

In the July call, he thanked Trump for his "great support in the area of defense" and said Ukraine was ready to "cooperate for the next steps," according to a rough transcript released by the White House. Zelenskiy suggested Tuesday that military aid was raised in other discussions, but didn't say when they took place.

The Pentagon announced plans in June to send US$250 million in aid to Ukraine, but its delivery was delayed. A defense official said last week that the Trump administration held up the money to analyze the extent to which Ukraine was addressing long-standing US concerns about corruption.

The funding was then released in September.

"It wasn't explained to me" why the money didn't come through earlier, Zelenskiy said.

Zelenskiy also said he has never met or spoken with Trump's lawyer Rudy Giuliani, who has been at the heart of Trump's effort to investigate Biden. According to the transcript of their conversation, Trump told Zelenskiy he would have Giuliani call him about pursuing an inquiry into the role of Biden's son, Hunter, on the board of the Ukrainian gas company Burisma.

Zelenskiy is facing a dilemma over how to handle Trump's request in the July call for Ukraine to "look into" the Bidens.

If Ukraine opens an investigation into the case, that helps Trump and the Republicans. If it doesn't, that helps the Democrats. And what Ukraine's current leadership really wants is continued US support, no matter who wins next year's US elections.

Ukraine "is the key ball in the political football between Democrats and Republicans," said anti-corruption activist Daria Kaleniuk. "We are in the middle of a very hot fight to which we don't belong."

"Ukraine is now in a very dangerous situation. We are in a country at war," she added.

For Zelenskiy and many Ukrainians, solving Ukraine's conflict with Russian-backed separatists is more important than whatever happens in the US election campaign. Zelenskiy scheduled Tuesday's news conference to announce much-anticipated accords that pave the way for peace talks with Moscow, and bristled when some journalists asked him about Trump instead.

Former Ukrainian lawmaker Serhiy Leshchenko said the revelations about the Trump-Zelenskiy call present both "a challenge and an opportunity" for Ukraine.

Ukraine risks losing the support of either the Democrats or the Republicans, he told The Associated Press, "and especially now with Ukraine facing Russian aggression, we need bipartisan support."

But it's also "a chance to show that Ukraine is ready to fight corruption," he said.

Leschenko said Ukraine should not remain "hostage to this situation," and predicted that Zelenskiy "will keep himself as distant as possible" from the US political debate.

A comedian with no political experience, Zelenskiy campaigned on promises to end the endemic, crippling corruption that has held back Ukraine's economy since it gained independence from the Soviet Union.

He introduced a long-stalled anti-corruption court after his election in April, but no major cases have made it to court yet. Anti-corruption campaigners hope he uses his new mandate to finally take on vested interests.

A former Ukrainian security chief argued Tuesday that the best way to show that Ukraine is serious about fighting corruption is to open new investigations into Burisma.

"The whole world is talking about Ukraine and the whole world wants to know what happened" at Burisma, Valentyn Nalyvaichenko told the AP.

Nalyvaichenko, a parliament member who twice headed Ukraine's National Security Service said he will initiate a parliamentary inquiry into Burisma.

He insisted he is not trying to do Trump's bidding. "We have no way to know whether any crimes were committed if we don't lead a comprehensive, transparent investigation inside Ukraine," he said.