By He Shusi in Hong Kong and Edith Lu in Beijing 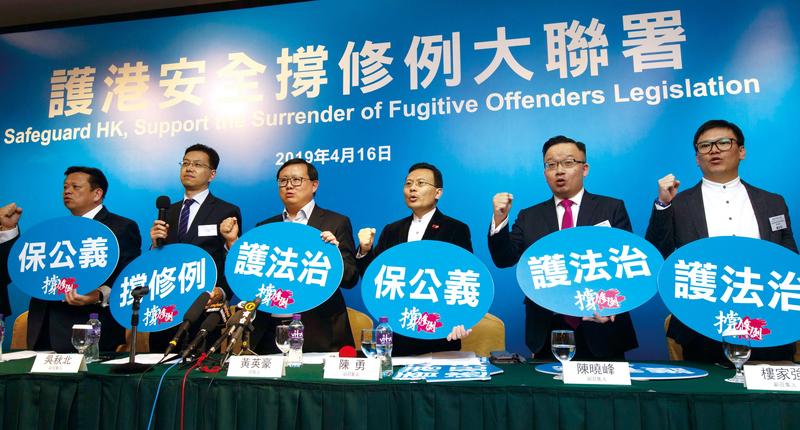 A group of 12 political leaders and legal experts in Hong Kong signed a joint petition on Tuesday to garner public support for proposed amendments to the city’s extradition law.

The move came a day before the Legislative Council established a bill committee to scrutinize amendments to the Fugitive Offenders Ordinance — which the government tabled to LegCo on March 26.

The amendments (to the Fugitive Offenders Ordinance) are being made on a sound legal basis; they were also consistent with values protecting human rights

The revised law, if passed by the LegCo, will allow the special administrative region to extradite fugitives and criminal suspects on a case-by-case basis to other jurisdictions. So far, the SAR has reached agreements with only 20 jurisdictions over the surrender of fugitive offenders.

The amendments are to prevent Hong Kong becoming a safe haven for criminals, explained solicitor Kennedy Wong Ying-ho, the convener and spokesperson of the event.

He added that he and fellow group members agree the amendments are being made on a sound legal basis; they were also consistent with values protecting human rights.

Wong is also a member of the National Committee of the Chinese People’s Political Consultative Conference — the country’s top political advisory body.

Group member Brave Chan Yung, a Hong Kong deputy to the National People’s Congress, the country’s top legislature, stressed that when it comes to fugitive extradition, the city’s courts will handle this on a case-by-case basis; they will review the crimes and ensure offenders will be treated fairly.

He called on Hong Kong people to have confidence in the judiciary.

Ten other politicians and legal experts also signed the petition. They included Stanley Ng Chau-pei, a Hong Kong deputy to the NPC and president of the Hong Kong Federation of Trade Unions, the city’s largest labor group, and Priscilla Leung Mei-fun, barrister and legislator of the city.

On the same day, Chief Executive Carrie Lam Cheng Yuet-ngor reiterated her hopes for the LegCo to speed up its scrutiny of the bill. She noted that there was an urgent need to deal with a Taiwan murder case suspect.

Any time lost will delay a fair trial of the alleged offenders, Lam said when meeting reporters ahead of the weekly Executive Council meeting.

On Monday, Zhang Xiaoming, director of the Hong Kong and Macao Affairs Office of the State Council, also expressed support to the SAR government’s proposed amendments.

He made the remarks during a meeting with a group of Hong Kong businessmen in Beijing.

Zhang said some people are trying to demonize the amendments and spread panic by deliberately misinterpreting the bill.

Hong Kong and the Chinese mainland are separate jurisdictions. Only those who have been found guilty by courts in both places will be extradited, Zhang noted. The rule would exclude political prisoners and those on a death row, he added.