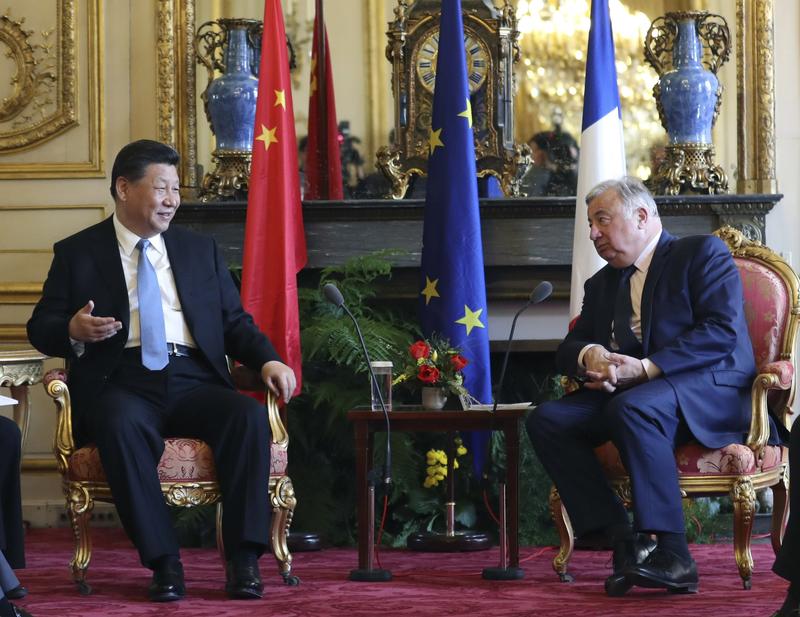 Xi said that the past, present, and future have linked the Chinese and French civilizations closely together, noting the age-old cultures of the two peoples are treasures of mankind.

Xi said that China and France should maintain a sound strategic partnership when the world is undergoing profound changes unseen in a century, urging the two countries to foster more fruitful practical cooperation so as to lay a solid foundation to deepen bilateral ties

Many founders of the Communist Party of China and the People's Republic of China (PRC) once studied in France when they were young, and were closely tied to France, he said.

As this year marks the 55th anniversary of China-France diplomatic ties, the Chinese people admire General Charles de Gaulle, who, with a great vision and a remarkable spirit of independence, made the historic decision to establish diplomatic relations with China, making France the first Western country to do so, Xi said.

History has proved that the General had made a right decision, and the Chinese people will always remember him, he said.

Xi said that China and France should maintain a sound strategic partnership when the world is undergoing profound changes unseen in a century, urging the two countries to foster more fruitful practical cooperation so as to lay a solid foundation to deepen bilateral ties.

It is believed that, with joint efforts by the two sides, China's ties with France and the wider Europe will surely see steadfast progress along historical trends, which will not only benefit the two peoples, but also be conducive to world peace and prosperity, Xi said.

Xi also said both Beijing and Paris pledge to maintain the basic principles of international norms underpinned by the UN Charter, and uphold free trade and the multilateral trading system.

He called on the two countries to continue to closely coordinate and cooperate on such key international issues as climate change.

Sound bilateral relations depend on close friendships of the peoples, Xi said, adding that China is willing to strengthen people-to-people exchanges with France in areas like culture and at subnational levels.

Larcher said France is committed to strengthening cooperation with China.

Paris has been an advocate for the multilateral system based on the UN Charter, and is willing to coordinate and cooperate closely with China, he said, adding that the French Senate and its standing committees are ready to step up their exchanges with China's legislative bodies.