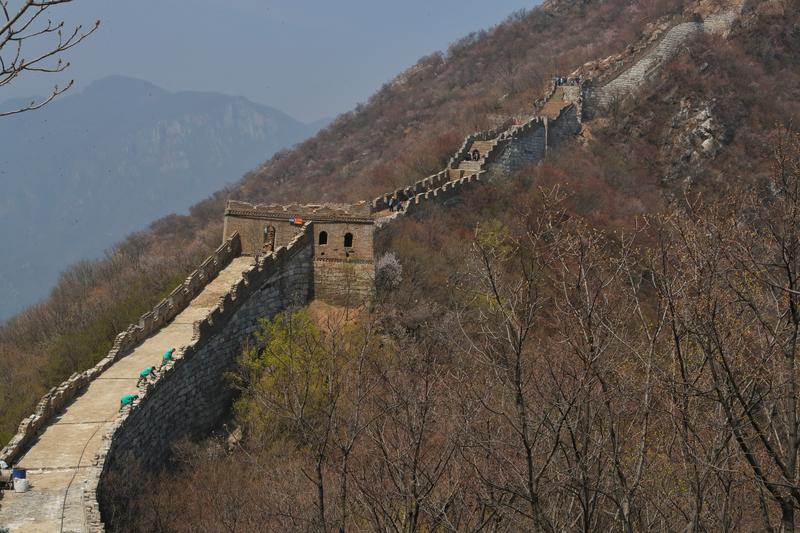 Jiankou, one of the toughest sections of the Great Wall to climb in Beijing, is going through its second phase of restoration. (JIANG DONG / CHINA DAILY)

There is little doubt that Jiankou is the toughest Beijing section of the Great Wall to climb. From the base of the hills in Huairou district, there is hardly a proper road that leads up to the wall except for a rocky path through cliffs. And in many places, the wall has collapsed, so walking along the top may lead to crawling as well.

An ongoing restoration on Jiankou started last June and will likely finish in a couple of months. It covers a 744-meter stretch of wall built in 1606

Nevertheless, Li Jingdong and his colleagues from a restoration team have to try walking over this section of the Great Wall twice a day.

"Our tractors can only reach the base, and then we need mules to carry the bricks to the top," he says.

An ongoing restoration on Jiankou started last June and will likely finish in a couple of months. It covers a 744-meter stretch of wall built in 1606 during the Ming Dynasty (1368-1644). This is the second phase of restoration of this part of the wall, after the first phase was completed between 2016 and 2017.

It took almost two hours for reporters, invited by the local government, to climb to the highest point of the Jiankou section on Tuesday to observe the restoration work. Li made it in half an hour.

ALSO READ: Beyond the Great Wall and the Bund

Li, a leading bricklayer in the project and a local villager in Huairou, has worked on the restoration of the wall for the past 15 years.

"In the beginning, I didn't consider repairing the Great Wall any different from any other restoration work. It was good as long as we could make some money, but now I don't see it as a general project," Li says. "The work here is demanding in terms of details." 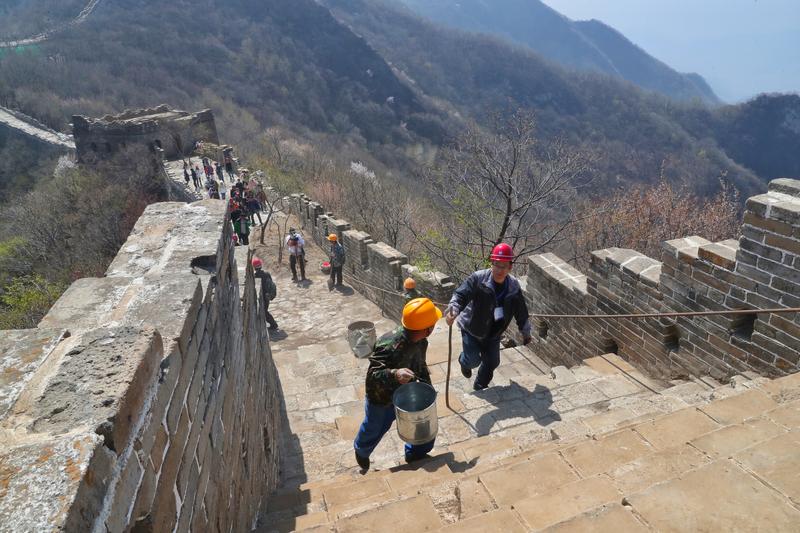 Members of a restoration team climb up the Jiankou section of the Great Wall. (JIANG DONG / CHINA DAILY)

Unlike other famous sections of the Great Wall in Beijing that also date back to the Ming Dynasty, such as Badaling and Mutianyu, Jiankou may not be for the passing tourist. Bilingual warning signs asking tourists not to climb this section are seen in nearby villages. Jiankou has never been officially opened up to tourism. But its wildness draws many outdoor sports enthusiasts, despite the risks of accidents.

Tang Wujun, a member of an emergency rescue team stationed in Huairou for the last 14 years, who is in charge of helping any adventurers in trouble, says: "In the past, outdoor enthusiasts were everywhere as long as it was a clear day. After the restoration began, that number has gone down."

Tang says he likes the idea of adventure through the wild parts of the wall but he also knows that unless they are repaired, some parts will disappear forever.

When the first phase of the restoration began in 2016, many netizens posted their regret about losing this "wild side" of the Great Wall. They also had reasons to doubt the work.

That year, a similar section of the Great Wall in Suizhong county, Liaoning province, became infamous after an outdoor enthusiast posted a picture of some restoration work online, in which a damaged area was shown to be roughly paved with cement. This triggered anger online and led restorers to ask themselves if they needed to preserve the original facade of the Great Wall.

"What is the original facade? How it looked during the Ming Dynasty, or the wall's appearance just before the restoration?" asks Song Xinchao, deputy director of the National Cultural Heritage Administration.

"The Great Wall is a witness to Chinese history and a key landmark in the collective memory of Chinese people. If the look of the wall is changed, memories of the younger generations will also change," Song says. 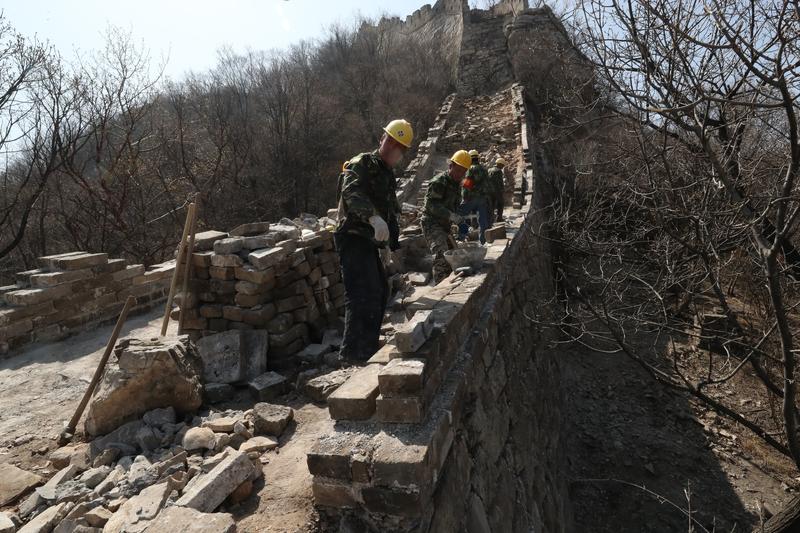 Cheng Yongmao, 63, is the chief engineer for the Jiankou restoration. According to him, a principle of "minimum intervention" has been taken in the ongoing second phase. The first phase still adopted some traditional ideas of using new bricks, like the work done during the 1950s to repair the Badaling section of the wall.

"We began to realize that the best way to keep the original facade is to cure its 'disease' and prevent it from collapsing further," he says.

This time, when it came to fixing one of the fort towers, new bricks were not used, Cheng says, but instead iron supports were added to strengthen it.

Saving money is also a practical reason to use new bricks less often.

A brick specially made for restoration of the Great Wall sells for 16 yuan (US$2.4), but it costs double that by the time it reaches the top of Jiankou by truck, tractor or mule. Plus, to control the quality of urban air, making such bricks in traditional ways is no longer permitted by environmental authorities in Beijing. These bricks have to be made in other provinces.

Having seen parts of the wall destroyed by rain water before, Cheng says his team decided to partially retain some areas of rubble.

"The water will gather again at the same spot," he says. "What we need to do is to make way for it to flow out smoothly from the wall. We need to adapt to nature during the restoration."

Water is the main enemy of the Great Wall.

"If water leaks into the wall through the cracks and stays there, it will become ice in winter and break the bricks," Cheng says.

Restorers have to fill the cracks one by one, using a traditional material of lime mixed with sticky rice.

Another major concern is the vegetation growing on and along the wall, which is considered a threat to the stability of the construction. But the restorers often debate if the greenery should be removed.

"If there was a tree growing on the roof of the Forbidden City, would you just leave it there?" Zhao Peng, an architect at the restoration site, asks, jokingly perhaps.

"We were undecided for a long time," he says. " But we are keeping most of it as long as the wall's foundations aren't disturbed." 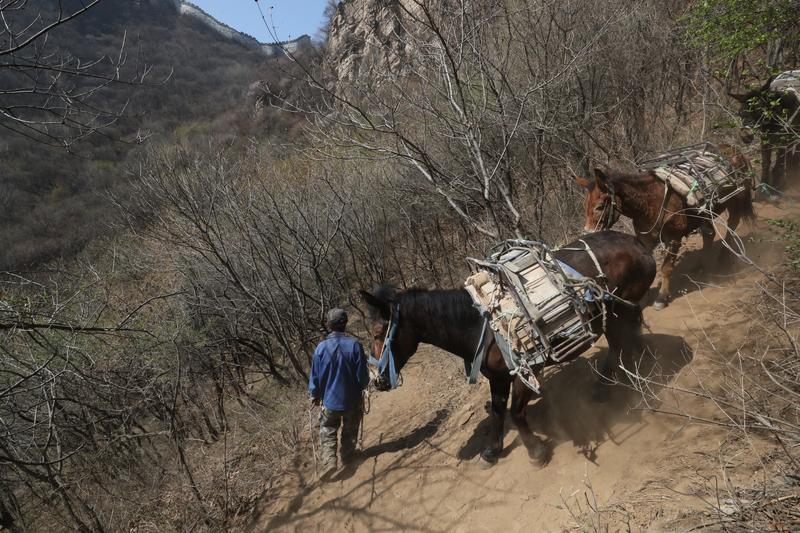 A common rule in the restoration of the Great Wall today: No more than 1 kilometer in length, which means no more than five towers, are restored in one phase.

"On one hand, this ensures quality work, and on the other, if we have new theories guiding the restoration in future, we could try them at different places," Zhao says.

Shu Xiaofeng, director of the Beijing Municipal Administration of Cultural Heritage, predicts 2,700-odd meters of the Jiankou section will be restored over the next three years.

"In the ruins of Pompeii (the ancient Roman city), we still see marks of different restoration methods over the last century," Shu says.

"We might see that in Jiankou as well when using different methods."

More than 8,800 kilometers of the Great Wall from the Ming Dynasty remain today in 10 provincial-level administrative regions. In January, the national-level comprehensive conservation plan was released to guide the restoration, management and academic research of the wall until 2035.

"For those portions that have become ruins, the priority is to prevent or slow down their disappearance. Mass restoration is not suitable in such cases," according to the document.

Song from the National Cultural Heritage Administration says he expects the second phase of restoration at Jiankou to set an example for other preservation work in the country.

"But we cannot set a uniform standard when fixing the wall. Each section has its own characteristics, so we have to tailor plans to each one," he adds. 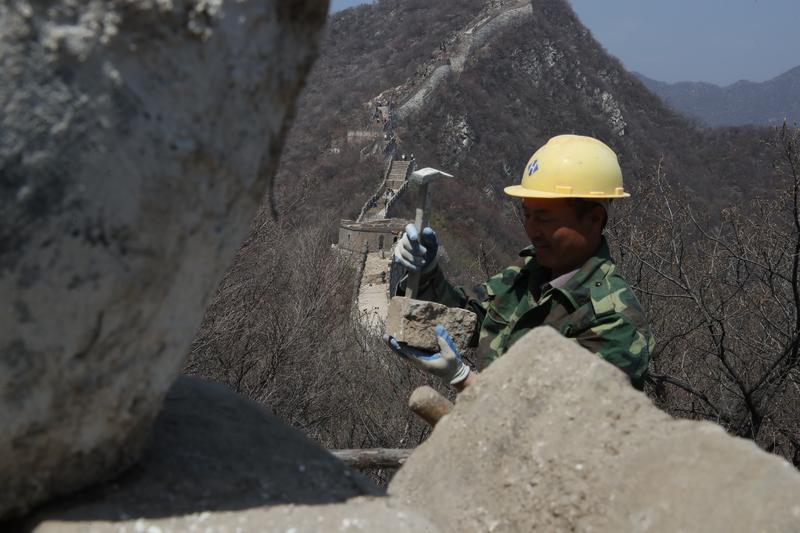 In the national-level conservation plan, more public participation in the restoration is also called for. Consequently, for the Jiankou restoration, some unprecedented things happened. Tencent Holdings Ltd, a Chinese tech giant, donated 10 million yuan, which it raised through crowdfunding online.

Cheng says some issues remain. For example, it is difficult to recruit experienced bricklayers like Li. They are paid about 280 yuan a day, which some workers don't find attractive.

"Besides, the experienced workers are getting old. And even if some new workers are willing to join our squad, they need to be good climbers, too."

Shu says systematic training for restoration is needed. A Great Wall conservation center will be set up in Beijing in the near future.

"Historical files on the Great Wall can be studied there and we can nurture talent with professional knowledge and practical experience," he says of the future facility. 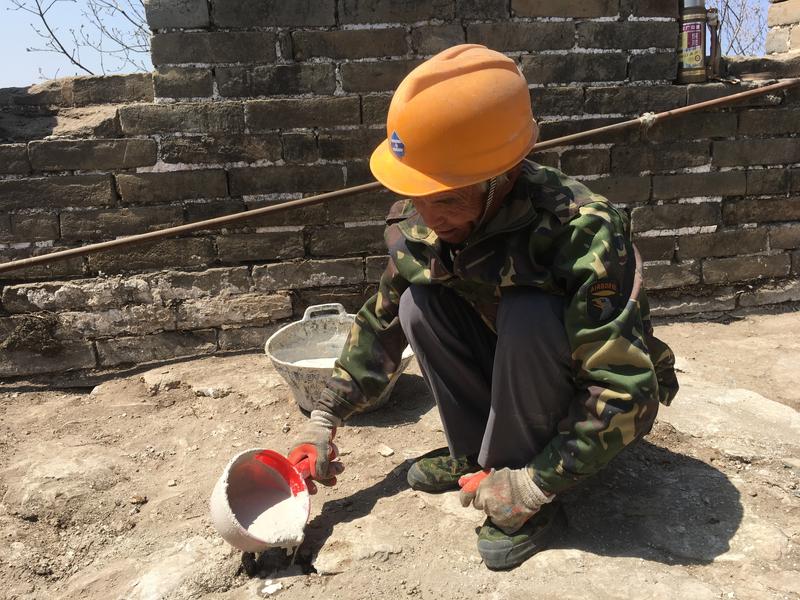 But Jiankou is unlikely to be developed as a destination for mass tourist even after restoration, because of the rough terrain.

"It will be accessed by a limited number of visitors in the future like Machu Picchu (the Inca site in Peru that follows a visitor reservation system)," he says.