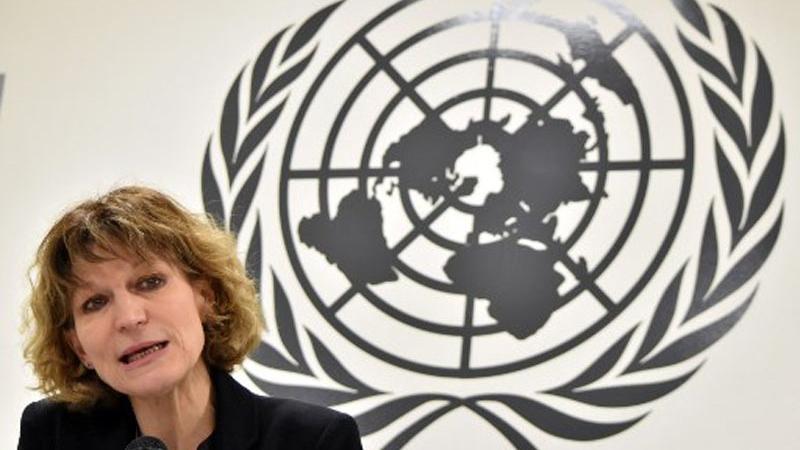 Agnes Callamard, the UN special rapporteur on extrajudicial killings, speaks during a press conference in San Salvador on February 5, 2018. The Philippines will allow an investigation into alleged human rights abuses in its bloody war on drugs, but not if it is conducted by the United Nations' current special rapporteur on extrajudicial killings, a senior official said on Feb 27, 2018. (MARVIN RECINOS / AFP)

MANILA - The Philippines will allow an investigation into alleged human rights abuses in its bloody war on drugs, but not if it is conducted by the United Nations' current special rapporteur on extrajudicial killings, a senior official said on Tuesday.

More than 30 mostly Western countries have called on the Philippines to allow the UN expert, Agnes Callamard, to look into the thousands of killings in President Rodrigo Duterte brutal 19 month-old crackdown.

Duterte's spokesman, Harry Roque, a lawyer, said the Philippines welcomed any investigation provided that the United Nations sends a "credible, objective and unbiased" rapporteur, who is also "an authority in the field that they seek to investigate".

Callamard does not fit that description, he said.

"Definitely, not Agnes Callamard," Roque told a regular news briefing. "It's her fault the home state does not want her in."

More than 4,000 Filipinos have been killed by police during the drugs war and hundreds, possibly several thousand, more by unidentified armed men.

Human rights groups and Duterte's political opponents say executions of drug users and small-time peddlers are widespread and systematic. The authorities deny that and say those killed were all dealers who put up violent resistance.

Last week, Amnesty International in the Philippines said "meaningful investigations" into such killings had failed to take place.

A prosecutor at the International Criminal Court in the Hague earlier this month started a preliminary examination into a complaint accusing Duterte and at least 11 officials of crimes against humanity. Duterte has welcomed that.

Roque said he had a lawyer in mind who could do the job instead of Callamard, but would not say who.

Duterte has previously said he would welcome a probe by Callamard on the condition she agreed to have a public debate with him.

She irked the government in May last year when she gave a speech at a policy forum during a visit in an unofficial capacity.

READ MORE: Survey: Filipinos more satisfied with Duterte govt than any other