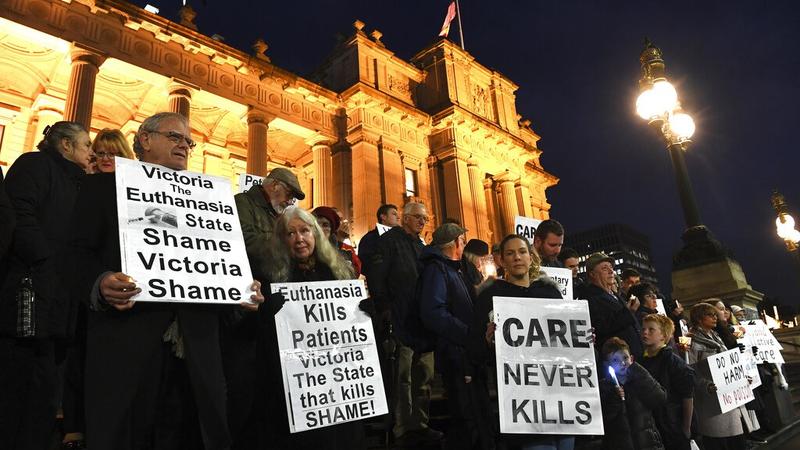 In this June 18, 2019, photo, pro-life demonstrators gather outside the Victorian State Parliament, opposing the voluntary assisted dying laws, in Melbourne. Voluntary euthanasia became legal in an Australian state on June 19, more than 20 years after the country repealed the world's first mercy-killing law for the terminally ill. (JAMES ROSS / AAP VIA AP)

CANBERRA, Australia — Voluntary euthanasia became legal in an Australian state on Wednesday more than 20 years after the country repealed the world's first mercy-killing law for the terminally ill.

We anticipate that once the scheme has been in place for some time, we'll see between 100 and 150 patients access this scheme every year

The process of dying in an assisted suicide after an initial approach to a doctor in Victoria state takes at least 10 days, so the first patient could die from swallowing a lethal cocktail of chemicals on June 29. Strict rules are designed to prevent terminally ill patients from traveling from overseas or interstate to access the laws.

Health Minister Jenny Mikakos said she expected as few as one patient a month would be helped to die in the first year.

"We anticipate that once the scheme has been in place for some time, we'll see between 100 and 150 patients access this scheme every year," Mikakos told Australian Broadcasting Corp.

"In the first year, we do expect the number to be quite modest — maybe only as low as a dozen people," she added.

Four Victorian Roman Catholic bishops have signed an open letter describing Wednesday as a "new and troubling chapter of health care in Victoria."

"We cannot cooperate with the facilitation of suicide, even when it seems motivated by empathy or kindness," according to the letter.

Any health practitioner can conscientiously object to taking part in the euthanasia process.

The euthanasia system has been implemented over 18 months since the state parliament passed the laws in 2017.

Australia's sparsely populated Northern Territory in 1995 became the first jurisdiction in the world to legalize doctor-assisted suicide for terminally ill patients. But the Australian Parliament overturned that law in 1997 after four people had been helped to die.

The Australian Parliament does not have the same power to repeal the laws of states such as Victoria, which is home to one in four Australians.

The parliament of Australia's most populous state, New South Wales, rejected a doctor-assisted suicide bill by a single vote two weeks before the Victorian law was passed.

Queensland and Western Australia state are considering their own euthanasia legislation.

Christine Thornton, the widow of a 54-year-old Victorian man who died in a Swiss euthanasian clinic four months ago, said the Victorian legislation must be the start, and not the end, of a public conversation about a lack of end-of-life choices in Australia.

She said the Victorian laws would have been too restrictive for her husband, Troy Thornton, because he could not find two doctors who could say with certainty that his degenerative disease, multiple system atrophy, would have killed him within a year.

"Troy never thought the first laws would help everyone, but it's a start," she said.

Eligible patients must be diagnosed with an incurable disease or a condition that causes intolerable, unrelieved suffering.

Patients must also be expected to live for fewer than six months in most cases, or 12 months for neurodegenerative conditions.

They must have also lived in Victoria for at least a year before requesting help to die and be an Australian citizen or permanent resident.