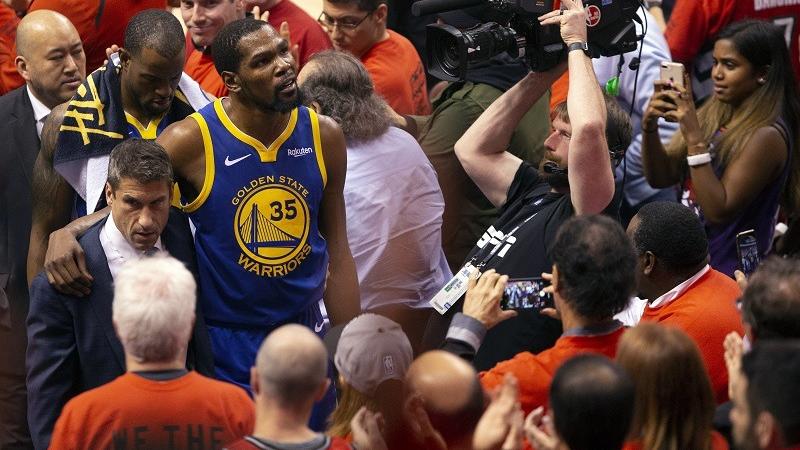 Golden State Warriors forward Kevin Durant glances up at the stands as he walks off the court after sustaining an injury during first half basketball action in Game 5 of the NBA Finals in Toronto, June 10, 2019. (CHRIS YOUNG / THE CANADIAN PRESS VIA AP)

OAKLAND, Calif. - Kevin Durant confirmed what everyone most feared: He underwent surgery for a ruptured right Achilles tendon.

Durant posted on social media Wednesday the severity of his injury two days after getting hurt during Game 5 of the NBA Finals in Toronto in his return from a strained right calf that sidelined him a month.

The 30-year-old posted a photo on Instagram showing himself in a hospital bed and wrote: "I wanted to update you all: I did rupture my Achilles. Surgery was today and it was a success, EASY MONEY."

I wanted to update you all: I did rupture my Achilles. Surgery was today and it was a success, EASY MONEY

Just 15 minutes before Durant went public, Warriors coach Steve Kerr said during a finals media availability that he didn't yet have a formal update on Durant. Durant has made his own announcements before, such as writing on The Players' Tribune website about his decision to leave Oklahoma City to join Golden State in July 2016.

The Warriors said later Wednesday that Durant had the surgery at the Hospital for Special Surgery in New York, performed by Dr. Martin O'Malley.

Kerr said everyone in the organization is "devastated," including Dr. Rick Celebrini, the team's director of medicine and performance. The Warriors made a "collaborative" decision to clear Durant to play - with the input of Durant and his representative - and had no idea that Durant risked a serious Achilles injury by returning from a strained calf, Kerr said.

"Now, would we go back and do it over again? Damn right," he said. "But that's easy to say after the results. When we gathered all the information, our feeling was the worst thing that could happen would be a re-injure of the calf. That was the advice and the information that we had. At that point, once Kevin was cleared to play, he was comfortable with that, we were comfortable with that. So the Achilles came as a complete shock. I don't know what else to add to that, other than had we known that this was a possibility, that this was even in the realm of possibility, there's no way we ever would have allowed Kevin to come back." 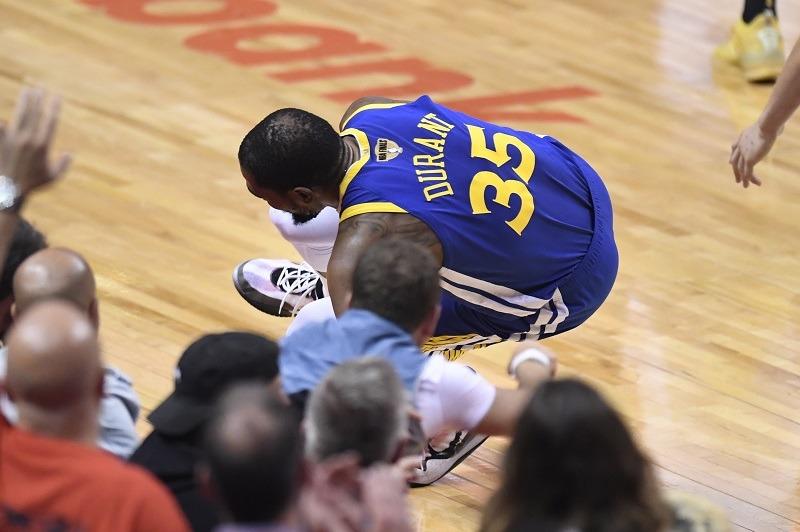 Golden State Warriors forward Kevin Durant (35) goes down with a leg injury against the Toronto Raptors during first half action in Game 5 of the NBA Finals in Toronto June 10, 2019. (FRANK GUNN / THE CANADIAN PRESS VIA AP)

After the game Monday, a teary, emotional general manager Bob Myers asked anyone who was looking to place blame to do so on him - not Durant, the medical staff or athletic trainers who worked so tirelessly to get him back.

Kerr said he also understands people wanting to point blame somewhere, though he noted, "Kevin checked all the boxes, and he was cleared to play by everybody involved," including doctors from within the organization and from the outside.

"I completely understand the world we live in. As Bob mentioned the other night, there's going to be blame. There's going to be finger-pointing. We understand that and we accept that. This is kind of what you sign up for when you get into coaching, general management, in the NBA," Kerr said. "There's all kinds of coverage, judgment, criticism, and it's all part of it. So we accept that. The main thing is our concern for Kevin and these last couple of days just checking on him. Obviously, everybody feels horrible for what happened." 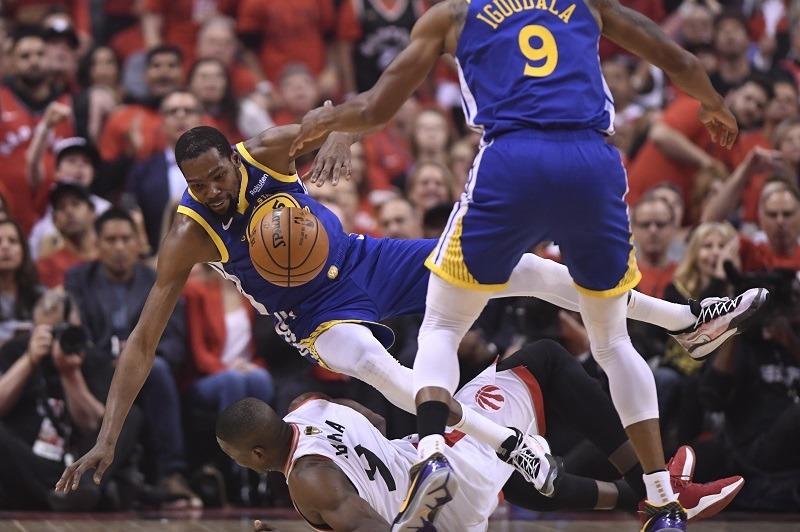 The two-time reigning NBA Finals MVP was injured Monday night in the second quarter of Golden State's 106-105 victory that forced a Game 6 at Oracle Arena on Thursday. The Raptors lead the best-of-seven series 3-2.

Durant initially was injured May 8 in Game 5 of the Western Conference semifinals against the Rockets, then missed the next nine games. A pending free agent, it's unclear what might be next for Durant now that he is set for a long rehab and recovery. Teammate DeMarcus Cousins returned in January nearly a year after rupturing his left Achilles tendon and undergoing surgery last season while with New Orleans.

Stephen Curry can only imagine how much Durant is hurting emotionally not being able to play - but second-guessing benefits nobody at this stage, the two-time MVP said. 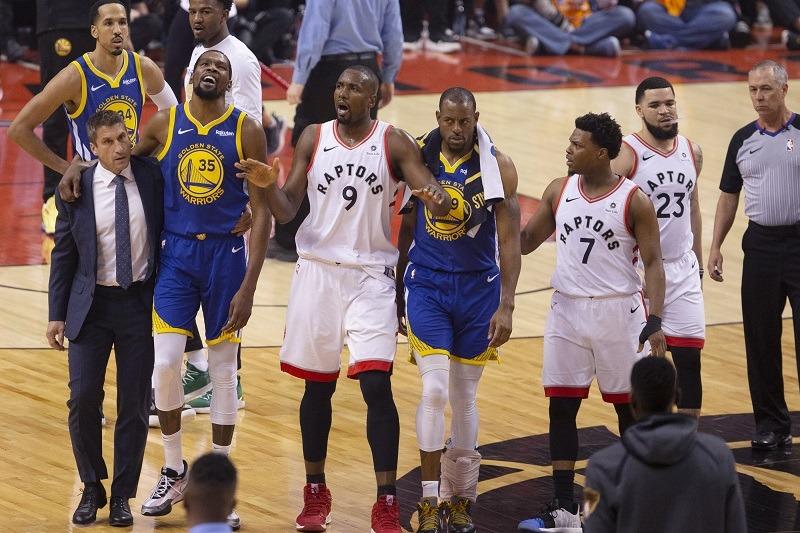 Golden State Warriors' Kevin Durant (35) walks off the court after sustaining an injury as Toronto Raptors' Serge Ibaka (9) addresses the crowd, while Warriors' Andre Iguodala (9) and Raptors' Kyle Lowry (7) look on during first half basketball action in Game 5 of the NBA Finals in Toronto, June 10, 2019. (CHRIS YOUNG / THE CANADIAN PRESS VIA AP)

"Everybody has great 20/20 hindsight," Curry said, then added: "I trust our medical staff and know Bob Myers has our best interests in terms of not just what we can do in this series, but long term in our overall health. You see how hard he took it, talking to you guys after the game. And that's really genuine and authentic. So you can waste time talking about the what-ifs and this and that. Injuries are tough and they suck. They're a part of our game, and they're going to continue to be a part of our game. But everybody putting their collective brains together to make the sound, smart decisions, you kind of just live with that, because that's what's a part of our game."