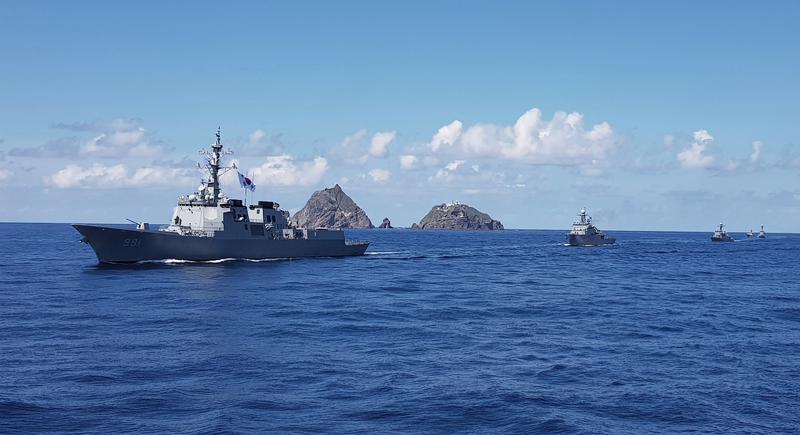 In this photo provided by the ROK's Navy, the ROK Navy's Aegis destroyer, King Sejong the Great, sails during the drill near the islets called Dokdo in Korean and Takeshima in Japanese, Aug 25, 2019. (PHOTO / THE ROK's NAVY VIA AP)

Japan published its 2019 defense white paper earlier in the day, in which it claimed Takeshima is part of its territory.

It marked the 15th consecutive year that Japan laid sovereignty claim in its white paper to the rocky outcroppings lying halfway between the two countries.

Seoul's foreign ministry said in a statement that it strongly protests against Japan's repeated territorial claim to the Dokdo islets, which are South Korea's own territory historically, geographically and by international law.

The ministry urged Japan to immediately retract the claim, saying Japan's repetition of unwarranted, ridiculous claim would be of no help for the bilateral relations.

South Korea has seen Japan's territorial claim to Dokdo as the legacy of the Imperial Japan's 1910-45 colonial rule of the Korean Peninsula.

The rocky islets were forcibly incorporated into Japan's territory following the Japanese colonization, but the couple of islets were returned to South Korea after the peninsula's liberation in 1945 from the colonial rule.

Japan's territorial claim came amid the frayed ties with South Korea, caused by the trade spat and historical issues.

Japan tightened control in July over its export to South Korea of three materials vital to produce memory chips and display panels, the mainstay of the South Korean export.

Japan's export curbs came in an apparent protest against the South Korean top court's ruling that ordered some of Japanese companies to compensate the South Korean victims who were forced into hard labor without pay by the Imperial Japan during the colonial rule.

Japan claimed that all colonial-era issues were settled through the 1965 accord that normalized the bilateral relations following the colonization, but South Korea said the pact did not involve individuals' right to reparation.