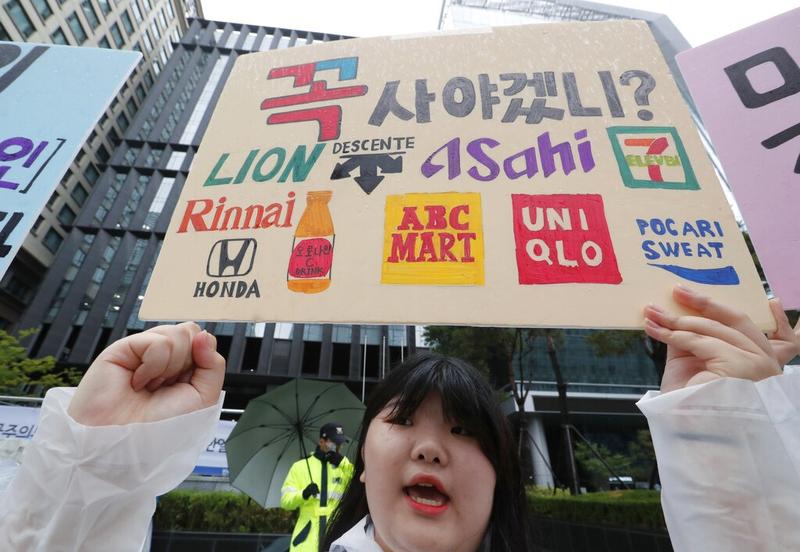 A South Korean high school student holds up a placard during a rally denouncing the Japanese government's decision on their exports to South Korea, in front of the Japanese embassy in Seoul, South Korea, July 26, 2019. The placard reads: "Do you have to buy it?" (AHN YOUNG-JOON / AP)

TOKYO — Antagonisms between South Korea and Japan are already at the boiling point. They're bound to deepen with Tokyo's plan to expand controls over exports of sensitive materials by dropping its neighbor from a list of 27 countries granted preferential trade status.

The decision, expected soon, will ripple across the high-tech sector, further shaking up supply chains already rattled by trade tensions between the US and China.

According to reports, the Japanese Cabinet will approve a plan to delist South Korea from its lists of countries granted preferential trade status as early as Aug 2. If it does, the new rules would take effect on Aug 23

As of July 4, Japanese companies need case-by-case approvals to export to South Korea three materials used to make semiconductors and displays used in smartphones and other high-tech devices.

With the loss of South Korea's so-called "white country" status, that requirement will apply to dozens more products on a list of items that potentially could be converted to weapons, according to a Japanese trade ministry document. That's in addition to more than 200 other items requiring individual inspection for exports to all countries.

Japan's trade ministry said Seoul has undermined a "relationship of trust," including export controls, with lax controls on re-exports to other countries. South Korea denied that.

Japan's trade minister Hiroshige Seko said Wednesday Japan plans to go ahead and strip South Korea of its preferred status for export licensing. He said Seoul had failed to provide a convincing explanation to address Japan's doubts that South Korean export controls are strict enough to prevent sensitive materials from potentially being misused.

Officials are studying opinions submitted to the government, but that's largely a formality.

Chief Cabinet Secretary Yoshihide Suga has not confirmed reports the Cabinet will approve the plan as early as Aug 2. If it does, the new rules would take effect on Aug 23, forcing exporters to get licenses to sell a huge array of products ranging from alloys of aluminum to freeze dryers and vacuum pumps.

ALSO READ: Japan sees no talks soon on its export curbs to ROK

Approvals of such exports could take up to 90 days, slowing but not halting shipments. But ending South Korea's "white country" status would also mean Japan could limit exports of any product on national security grounds.

Adding another layer of ambiguity to the diplomatic dispute, Tokyo also has expressed dissatisfaction over demands for compensation for people forced to work for Japanese companies before and during World War II, an issue Japan says it settled under the 1965 treaty normalizing relations.

Until recently, such issues had not affected trade between the two countries, both of which depend heavily on exports. Japan has run a perennial trade surplus with South Korea, at US$20.3 billion in 2018, with parts, chemicals and other materials and equipment accounting for about US$15 billion of its exports last year.

Analysts say the tighter approvals on the three items subject to licensing controls — fluorinated polyimides, photo resists and hydrogen fluoride — have had a limited impact because South Korean companies had at least 3-month stockpiles of the computer chips and displays that would be affected, thanks to slowing demand and worries over Sino-US trade tensions.

But the tightening controls are adding to uncertainty for technology manufacturers.

"The restrictions threaten not only Korean companies but also companies from many other markets that take part in the global technology ecosystem," it said.

"If the Japanese government decides to remove South Korea from its 'white list,' this could substantially increase the negative impact of trade frictions with Japan on the South Korean economy," Rajiv Biswas, chief economist for at IHS Markit, said in a commentary. 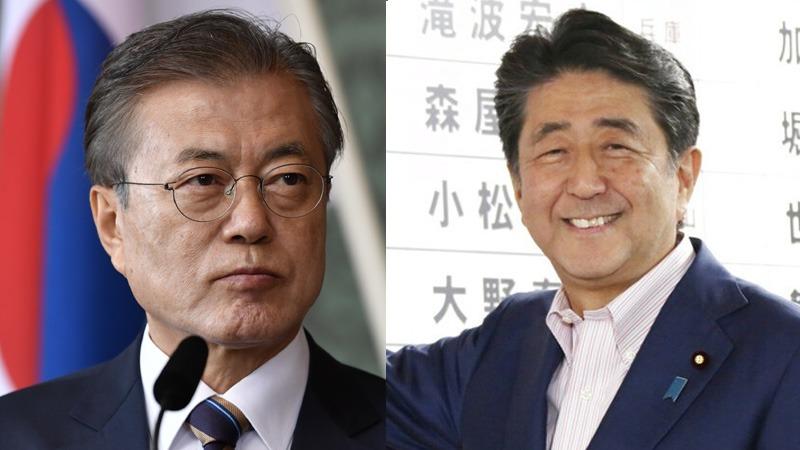 Abe will not hold talks with Moon unless Seoul takes constructive steps over World War II-era forced laborers and other issues, the Japanese daily reported.

Abe will also forgo meeting Moon during other opportunities, including an Association of Southeast Asian Nations meeting in October and an Asia-Pacific Economic Cooperation gathering in November for the same reason, the Sankei added.

The leaders did not meet during June's Group of 20 summit in Japan's western city of Osaka.

"Things might be at their worst since the normalisation of diplomatic relations," the Sankei quoted an unidentified source close to Abe as saying.

At a briefing on Monday after returning from a US trip, South Korean Trade Minister Yoo Myung-hee said she told American officials that Japan's moves set a very dangerous precedent for using trade measures as a tool to resolve political issues.

Separately, Korean Air Lines said it would suspend flights between the South Korean city of Busan and Sapporo in northern Japan from Sept 3 due to falling demand amid the worsening diplomatic row that has spurred boycotts of Japanese goods and services, from beer to travel.